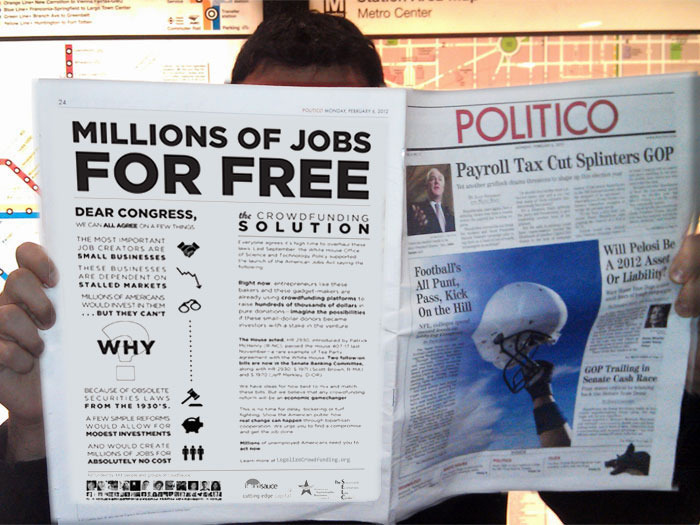 Did you know that, right now, it's illegal for you to invest $250 in a tech startup or local business?

A crew of entrepreneurs, small business advocates, and crowdfunding enthusiasts have banded together to change this by urging Congress to pass a bill that would legalize crowdfunded investments. Amazingly, last November, the politically divided House of Representatives passed a version of this bill, which is currently stuck in the Senate laying idle for the past several months.

This gang of crowdfunding advocates – including members of the American Sustainable Business Council, the Business Alliance for Local Living Economies, and a handful of others – is seizing the moment to show the Senate that this bill has strong support from both the public and small businesses. One way they're doing that is by crowdfunding a full-page ad in Politico to tell the Senate that America is ready for an economic game-changer. The group believes that the ad, in and of itself, could be the game-changer for the bill's fate and for crowdfunded investing. Money for this ad is currently being raised on LoudSauce, the online platform which enables citizens to crowdfund advertisements for messages that matter.

Show the Strength of the Crowdfunding Community

In addition to 50 initial amplifiers on LoudSauce, some organizations, such as Crowdfunder.com and Slow Money, have also pledged funds to the campaign with several other groups slated to come on board this week. The campaign has until Monday, March 19, to secure $13,500 in pledges, or the full-page ad will not happen (and no one will be charged). You can contribute to the crowdfunded ad campaign and get your photo included with the list of funders in the printed ad. 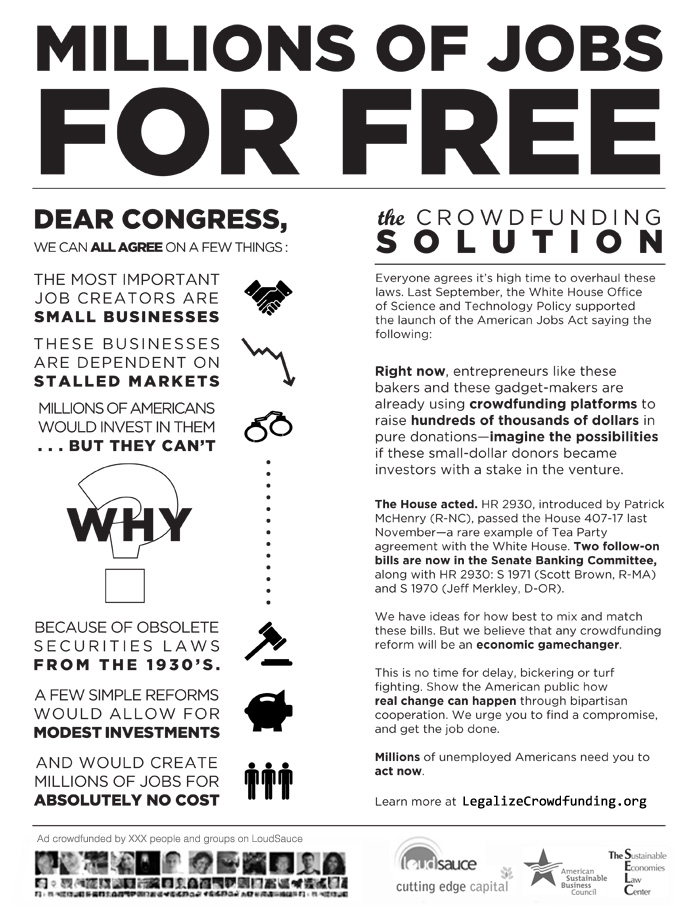 Why Now?: Urgency for Crowdfunding Bill

According to Woodie Neiss, co-founder of Start-Up Exemption, a newly formed group leading the charge on legalizing crowdfunding, “We have this small window of opportunity to pass the Crowdfund Investing law over the next several weeks […] The Senate has been sitting idle even though a few Senators have tried to push Crowdfunding forward.”

In addition to the crowdfunded ad campaign, there are petitions on LegalizeCrowdfunding.org and Crowdfunder.com to demonstrate support for crowdfunding legislation. Crowdfunder’s petition shows not only how many people and companies support the bill, but also the $12.5 million dollars currently prevented from getting invested into small businesses and startups through crowdfunding. Proponents of the legislation have also circulated a letter of support that was signed by the presidents of the National Black Chamber of Commerce, National Small Business Association, and Small Business & Entrepreneurship Council.

Parts of the bill have been criticized by regulators, including a vague New York Times editorial expressing concerns that crowdfunding has a lack of "meaningful disclosure" and is without "adequate oversight" by the Securities and Exchange Commission. Another letter from Consumer Federation of America expresses their disapproval, as well.

Paul Spinrad, the organizer of the LoudSauce campaign, recently wrote in a blog post that, “by all accounts, during this presidential election year, it will be near-impossible to get any new legislation passed if it doesn't happen soon. We're figuring if we don't get some significant movement in the Senate by April 1, then there's no way – no joke.”

Co-Founder & CEO of LoudSauce, a crowdfunded advertising platform for good. Before founding LoudSauce, Colin had been exploring how digital media can influence behavior and transform culture for his entire

Co-Founder & CEO of LoudSauce, a crowdfunded advertising platform for good. Before founding LoudSauce, Colin had been exploring how digital media can influence behavior and transform culture for his entire career. After leading online efforts at Listen Up!, the nation’s premiere youth media organization, Colin completed his MBA at INSEAD in France and Singapore, and then helped lead the global Nokia account for R/GA, Ad Age’s Digital Agency of the Decade. He is now applying his digital expertise towards promoting social enterprise, through both LoudSauce and his work at brand innovation firm Addis Creson. Writing and performing since 1999, Colin Mutchler’s spoken word and music have contributed to the growth of open source creativity. He is one of the early Creative Commons success stories, and has been highlighted as a “Featured Commoner.” His acclaimed multimedia “Free Culture Tour” has been featured at colleges and conferences nationwide, including Duke University and SXSW Interactive. Colin’s voice has inspired more than 150 remixes, and as a result he released “Premixed,” the first album collaboratively (and legally) produced by “the commons” via members of the remix community ccMixter.org.