Coworking is Awesome, Let's Keep It That Way - Shareable
Skip to content 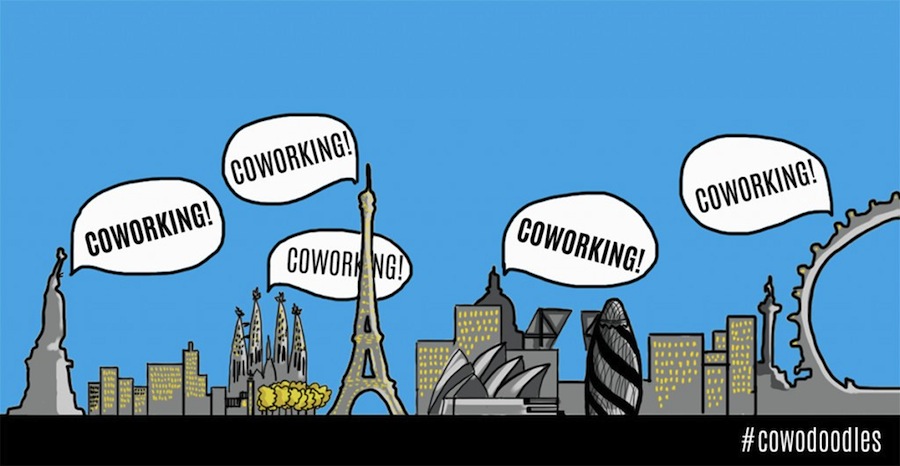 Talking with Tony Bacigalupo about coworking and the future of work turns out to be a very meta experience. With me calling from a bustling coworking space in Santa Cruz, California and Bacigalupo, who’s the co-founder and mayor of the coworking space New Work City, doing the interview from a New York City street, we’re embodying what we’re talking about: that for a growing number of people, work no longer means being tethered to a cube or rigid schedule. Amidst city sirens and coworking chatter, we get down to business.

A pioneer of the coworking movement, Bacigalupo has seen coworking transform from a few people hanging out working on their laptops, to an international phenomenon with over 2,500 spaces worldwide and countless variations on the coworking theme, including some that look an awful lot like corporate offices. He calls the astonishing growth of coworking “outside the realm of comprehension” and says that even the rise of corporate-coworking is not necessarily a bad thing—as long as we remember what makes coworking so appealing in the first place.

“This is great that [coworking] is becoming an increasingly mature industry,” he says. “But let’s keep the focus on why this is happening, and use that to drive continued growth of the industry in a healthy way. What we don’t want,” he continues, “is to have coworking just get swallowed up in the office rental industry, as just another product.”

Putting his money where his mouth is, Bacigalupo works hard to make sure that coworking stays true to its original purpose of bringing people together for collaboration and community. In addition to running New Work City, he's an organizer of the Coworking Community NYC Meetup, he helped New York City develop Hive at 55, the first coworking space built and run by a business improvement district, he co-teaches an online class about community building, he co-authored I'm Outta Here, a book about coworking, and more.

In a nutshell, he works to remind people what makes coworking awesome. He describes coworking spaces as great centers for people entering the new economy to get their feet, get educated, get connected, get comfortable and become less afraid of “the scary notion of taking life into your own hands.” 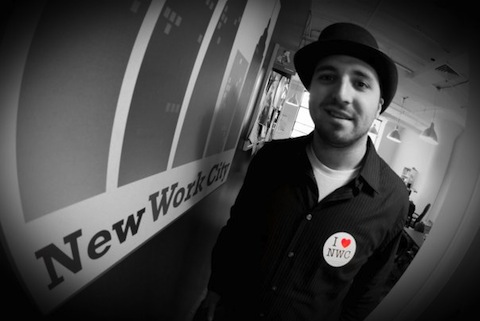 "What people want, is access to other human beings." —Tony Bacigalupo

As coworking has emerged as a viable business model, the conversations around it have changed. The early gatherings of coworking enthusiasts were very socially focused—“It was about doing good for each other and helping each other,” says Bacigalupo. Now they’re focused more on the business side—strategies for optimizing the business. It’s a change that has its drawbacks, but Bacigalupo points out that if the coworking movement is going to continue to grow and thrive, we need these scalable businesses that access a larger population of people.

“If you want people to be coworking,” he says, “we’re going to need businesses that know how to operate at scale to do that.”

A visionary thinker and experimenter, Bacigalupo’s work centers around bringing people together and challenging the traditional model of work. He’s a leader of the coworking movement, but he’s also committed to the idea that coworking need not be big and formalized to be effective and fun. For him, coworking is not about the space, it’s about the people in it and their intention to build a community. He says that those trying to sell coworking as merely shared office space are misguided.

“If you open a new space, and it’s brand new and shiny, and there’s nobody in it, then you’re not actually selling the product that people want,” he says. “What people want is access to other human beings…the people that are coming to a coworking space don’t need office space. If you’re trying to sell them an office space, you’re doing something wrong.”

Coworking spaces provide a glimpse into what Bacigalupo calls “a truly deep and fundamental shift in people’s relationship with their work.” He talks about the tradeoff that has been made with traditional work—show up to this spot on a regular basis and do some work in return for a steady paycheck and security for your family—but stresses that in this tradeoff, you risk sacrificing everything else in service to someone else’s interests.

“We came up with this really toxic relationship with work, that it’s something that I have to do for somebody else, and the fun and joy that I get from life is something that I’ll do in between,” he says. “We shouldn’t have to be so disconnected from the work that we do.” 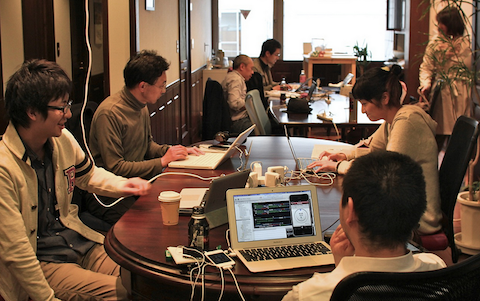 A great coworking space is about community, not space. Photo: Yutaka Fujiki

As people discover ways to work that allow them to pursue their own vision, coworking has been both a driving force and distributed incubator for a movement that is still defining itself. Through various coworking projects, Bacigalupo strives to find new ways to bring people together to help them thrive as individuals, build communities of mutual support and grow a movement that is reshaping work.

His latest experiments with Coworking Community NYC involve small groups of people working together in unusual locations including the Metropolitan Museum of Art, a wine bar, and a kimchi restaurant. The idea is to communicate, in an obvious way, that coworking is not something that is about a specific facility and to experiment with engaging existing communities outside of their usual work space.

“The New Work City community is many times larger than the paying membership,” he says. “We can think of our community as something that isn’t attached to New Work City, Monday through Friday 9 to 5, but is just attached to anywhere you want to hang out on your laptop and be around other nice people.”

Bacigalupo is part of a core group of coworking advocates, including Adam Teterus, Alex Hillman, Ashley Proctor, Cristina Santamaria, Jacob Sayles, Susan Dorsch, Jeannine van der Linden, Oren Salomon, Rachel Young, and Will Bennis. Involved with coworking spaces around the world, this group works to further the coworking movement through various projects including the Coworking Wiki that features, among other things, best practices and business models for starting and running a coworking space.

Another project, dubbed Open Coworking Talks, aims to bring the coworking community together in a way that isn’t tied to any one space. Created by Sayles, the first broadcast, which aired in January, focuses on the core values of coworking, including collaboration, and is what Bacigalupo calls “an early foray into a wider effort to foster conversation around the fact that coworking represents something much bigger than most people might be aware of at first glance.”

“It's just so easy for coworking to be pigeonholed into a conversation about workspace rental,” Bacigalupo says. “Focusing on core values allows us to peek into what that deeper meaning looks like."

The group’s future efforts will be focused on taking that conversation forward in ways that allow for greater participation. For now, they're focusing on sharing their perspectives on coworking with attendees of the Global Coworking Unconference Conference (GCUC), which is May 1-3 in Kansas City, Mo. According to Bacigalupo, the group will have a brainstorming session there to chart the next steps.

Through Bacigalupo’s various projects, he says he hopes to learn more about how to develop a support network for creative independents, using coworking as the core delivery mechanism.

“It's easy when you're working for yourself to feel like you're totally on your own, and that your problems are unique to you,” he says. “In reality, there are a lot of other people around you who are dealing with the same challenges, and everyone has a different perspective on things.”

“We're all dealing with these things,” he says, “and we can all help each other as we go, because each of us has been working hard to solve these things on our own. When we get together to support each other," he adds, "the hard things tend to become easy.”

Along these lines, Bacigalupo is a proponent of adding what he calls “intentional elements,” such as shared accountability groups and structured work-sprint sessions, to the coworking mix. These bring people together for increased problem solving ability, productivity, and fun.

Getting In on the Action

For those who want to create a coworking space, Bacigalupo suggests starting with a hangout or jelly in someone’s home. You can use that as a foot in the door for developing a coherent community, which is the foundation of a great coworking space.

He adds that it’s relatively easy to get a space going and that the hardest part is getting the culture right.

You can also search for a Meetup if you don’t find a coworking space nearby, or create a coworking Meetup if you don’t find one near you. Regardless of how you begin, you’ll find a rapidly growing, international community of enthusiastic coworkers who can lend advice, insights and resources. “If you're looking to work for yourself and legitimately build a life for yourself being creative and happy,” says Bacigalupo, “then you’ll find many friends in the coworking world.”

When I ask him what he is trying to accomplish with his work, Bacigalupo laughs and says, “World peace.” But his vision truly is grand, and it taps into the potential of coworking to change lives.

“The scope of what I can reach, with the opportunities I have,” he says, “is to play a part in shifting the world’s relationship with work away from one that’s unhealthy toward one that’s healthy and intentional.” He continues, “When it’s all said and done, if more people see their work as an opportunity to realize their potential as human beings, then I’ll have done my part.”