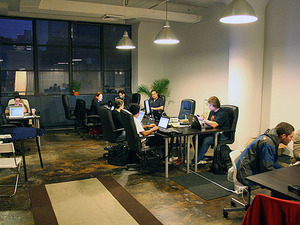 NPR ran a story yesterday about coworking spaces–where freelance and solo workers cluster together under the same roof and share certain office resources–and the story is pretty good:

Kevin Prentiss started his Internet-based business from his apartment in New York City. For two years, he says he worked 14-hour days in solitude — ironic, considering he runs a social networking site.

Then one day he heard about New Work City. It’s a rented office space in Manhattan where workers like Prentiss can drop in, hook up their laptops and work away with other people similarly mobile, while making face-to-face connections.

Membership at New Work City is kind of like going to a gym. The plans range from $150 a month for two visits per week on up to getting your own key.

"This is the front door of New Work City," he says. "The first thing you see is a calendar of what’s going on."

It looks like any other typical start-up office environment: There are two conference rooms, a main room with tables pushed together and a kitchen. Members pitch in for the first aid kit and communal office supplies shelf. There isn’t a janitor; everyone cleans up. There are snacks, soda and beer too.

"It’s real simple," Bacigalupo says. "If you take something, just drop a dollar into the jar."

New Work City is part of a trend that started a handful of years ago on the West Coast. Newly mobile tech workers with laptops liked their freedom but still missed the human interaction they got from going to an office. So they formed meet-up groups: casual, once-a-week deals at different locations — sometimes even people’s living rooms. Today, Bacigalupo says more and more people are working independently — either by choice, a layoff or both.

"The same way that [during] the last century work shifted from blue collar to white collar," Bacigalupo says, "I think we’ll be seeing in this century, we’re going to be moving away from the idea of a centralized Monday-to-Friday, 9-to-5 workplace, and we’ll be moving much more in this direction. People will work when they want where they want."

Incidentally, Shareable.net is based in a coworking space–we share an office with freelance reporters Dave Cohn and Bernice Yeung, as well as the redoubtable Public Press.