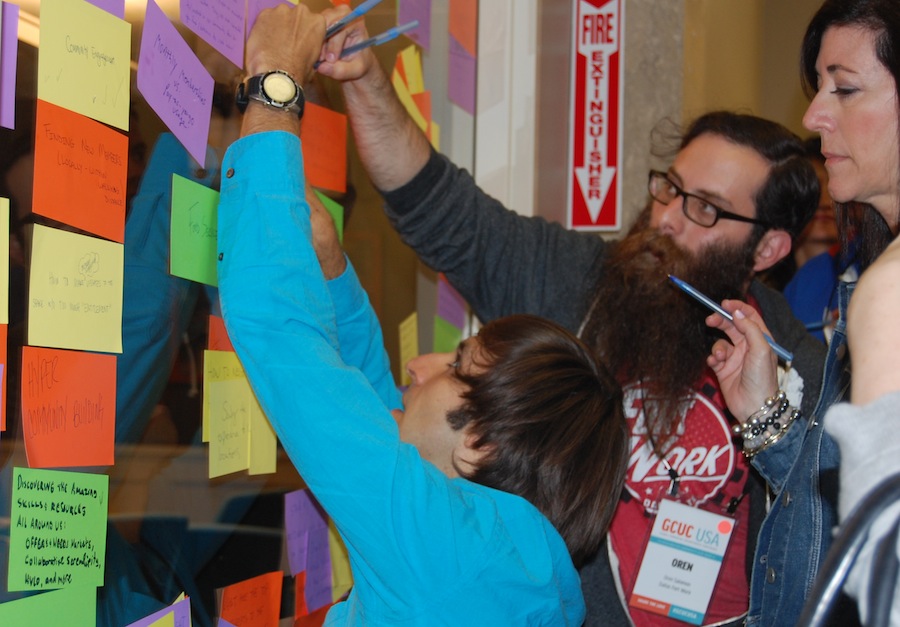 Tony Bacigalupo wears many hats. He was the “mayor” of the now-closed coworking space New Work City, he’s one of the masterminds behind the freelancer productivity program Cotivation, he’s a coworking visionary, and now he's an author.

His new ebook, No More Sink Full of Mugs, offers up his hard-won wisdom to coworking space operators everywhere. Full of tips, insights, and creative problem-solving techniques, the book addresses the most common challenges of running a coworking space, including how to build community; how to set work hours; how to handle troublesome members; how to keep up with the never-ending demand for coffee; and, of course, how to keep the kitchen sink from constantly filling with dishes.

Shareable caught up with Bacigalupo to find out more about the challenges of running a coworking space, how coworking space operators can better engage their communities, and what a sink full of dirty mugs has to do with coworking.

Shareable: The sink full of mugs analogy represents what you describe as a culture of “someone else will deal with this.” Why is this a common challenge in coworking spaces, and what is your big picture way to address it?

Tony Bacigalupo: It's a classic case of the Tragedy of the Commons. Nobody really likes cleaning out the sink, so it's easy to leave it for someone else to deal with. This is especially pernicious in an environment where people are paying to be there. The trouble is, if people are just treating their work environment as a consumptive experience instead of as a participatory experience, they're missing out.

Addressing that means doing everything you can to reinforce a sense that this community is ours. The more we put into making it great together, the more we will all get out of it. That requires doing a lot of re-programming, because it's not the kind of experience most of us are used to.

At the beginning of the book you encourage readers to skip to whatever section they need, writing, “Don’t let me be the boss of you.” This sentiment resonates throughout the book. What does this mean to you, and how does it inform both your work in the coworking movement?

Ultimately, that kind of mindset is what I want the reader to learn to practice for themselves. People who manage coworking spaces have to work with the fact that their customers are, by their very nature, very protective of their autonomy. Maintaining a position of leadership in an environment like that is no small undertaking; for a lot of people it's a huge shift. I figure it doesn't hurt to start by leading by example. 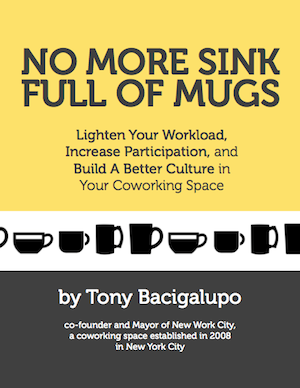 You advise coworking operators that putting all the community building and improvement on themselves leads to burnout. What’s your favorite way to engage everyone in community betterment?

Just talking to people like they're humans. One of my favorite things to do was to just get to work early, when people were just starting to arrive, and catching up with some of them them before they got sucked into their laptops. The morning offered a fleeting moment of serenity, where people might be more likely to feel spacious and talk about their lives a little more. Once you get to talking about a person's life and what makes them tick, a bond gets formed.

Everything gets easier when you have a community of people who have even a little bit of a true human bond outside of pure work.

Your rules of thumb for coworking space operators include: treat people like human beings, value relationships over transactions, empower people, and trust people. These tips apply, not just to coworking, but to creating a healthy work life. What would you say your overarching view of work is?

We're moving away from a model of hierarchical work, where there's a command-and-control structure and people must obey their bosses or face exile. And good riddance! We're an interdependent race. That means each of us has something to offer, and each of us needs others to support us. We're starting to see those kinds of paradigms emerging everywhere now, as we shed some of the individual-focused mindsets of the previous century.

A few of your ideas for building happy, empowered communities are to celebrate when people clear the sink, give everyone a way to connect, and offer members a way to help run the place. This all speaks to creating an engaged, active community that understands that they are participants rather than consumers. What less-than-pleasant experiences did you have on your way to discovering this, or was it in place from the start of New Work City?

It was largely in place from the start, but it's never been something that just worked on its own. It required constant maintenance.

As far as giving people better ways to connect to each other, that was a constant battle. No matter what we did, there were always better connections to be made. Probably the worst case of this was when a really great member of the community told us, after leaving, that they were hoping to connect with people with certain kinds of skillsets that we had in our community, but she never encountered them. That stung!

In the book, you offer advice on how to deal with people who may not be a good fit for the space. What have you found to be the best strategy to deal with this situation, either before, or after, they become a member?

You have to try really hard to remember that they're people who may be more reasonable than you think. When you run a community, you encounter people with vastly different ways of communicating and socializing. When someone seems to come at things from a very different angle, it can be easy to see it as wrong, but you don't have to think of it that way.

Lots of healthy communication can help you and the person in question come into greater alignment. It just might take some dedication and work.

Why did New Work City close and what did you learn from it in both a personal and business sense?

New Work City closed its coworking space because the lease was up and we didn't find a way to continue operating in a way that would work for everyone. We instead worked with other coworking communities around the city to ensure everyone found a new spot to call home.

From a business perspective, one of the biggest things I learned was simply that nothing lasts forever. New Work City was designed from the start to be something that made coworking more possible and more accessible in NYC, and the flourishing of communities in the city now makes it clear that we achieved that mission.

We might have turned it into something that could last a lot longer, but we chose other paths instead. I think it's been hugely valuable for me to learn that sometimes that's okay.

Personally, I learned what it meant to let go. Other members of the community understood that it was time to declare the party over earlier than I did; my ego held onto the chance that we could find a way to keep things going far longer than it should have.

Did that experience of closing New Work City inform the book, and if so, how?

I wrote the book long before we closed up; I released it afterwards so more people could benefit from the knowledge we'd built up over the past eight years and build better communities of their own.

Since 2008, and really 2007 when we got started, our community has acted as an inspiration for many others who are building similar communities all over the world. The more that I can do to help others do a better job, the better for everyone.

Some people might think that the closing of New Work City means it was a failure, or that the advice I have to give as to how we do things isn't valid, but I don't believe that's the case. We succeeded at what we'd set out to do, and our community was incredibly strong all the way through.

I do feel tempted to write another ebook about what I learned shutting down New Work City's coworking space and what I would do differently were I someone still running a space. I get the feeling that would be useful to a lot of people too.