The event featured a week of workshops, open houses and receptions culminating in a free coworking day on Friday.

According to the Detroit Economic Growth Corporation, 13 co-working spaces are now available across the city, each with a unique focus and clientele, and more are in the works. For example, Green Garage focuses on businesses with a sustainability bent, Bamboo Detroit targets professional freelancers, Practice Space is centered on place-based entrepreneurs like retailers and developers, Ponyride and OmniCorpDetroit focus on makers, hackers and artists, and Grand Circus is geared toward tech startups.

“Coworking is not just about a shared space but also about building community, and that‘s what makes it attractive and beneficial for everyone,” says Amanda Lewan, one of the co-founders of Bamboo Detroit.

Lewan, a freelance writer who edits the entrepreneurship blog Michipreneur, says the space was co-founded by a group of people with full-time jobs working on startups on the side and established freelance writers and developers in need of space.

“We are trying to be affordable for the early stage entrepreneur,” says Lewan, who expects that while members will eventually funnel to other spaces or join an incubator, many will keep their memberships as they value being part of the community. 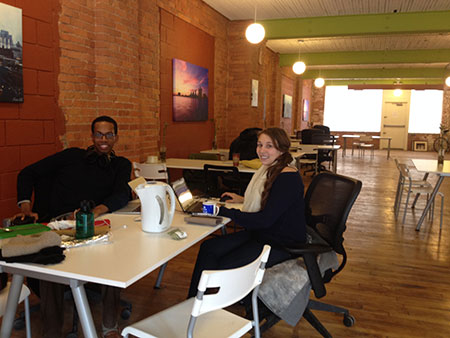 Bamboo Detroit is located in downtown Detroit in a building that originally functioned as a German print shop in the 1920s. The newly renovated space, which features natural light and bamboo plants on every table, had not been leased in over ten years. Launching in August with 15 members, the space has more than doubled membership in the first six months, hoping to grow to 100 members. Members are offered 24/7 access, Wi-Fi, printing and copying, mailing address, and access to workshops and mentoring by other members for a $99 monthly fee.

Across the city in Midtown, tech and wholesale/retail incubator Tech Town Detroit launched its new coworking space, Junction 440, on January 7. The space offers several tiers of membership, from a $20 per visit punch-card to a $375 monthly membership. Amenities include meeting space, parking and bike racks, wi-fi, printer, scanner, fax, kitchen access, and locally-roasted coffee.

“This space will become a hotbed of innovation, a dwelling for serendipitous encounters and a catalyst for the redevelopment of Midtown’s broader innovation district,” said Leslie Smith, president and CEO of TechTown in a press release. 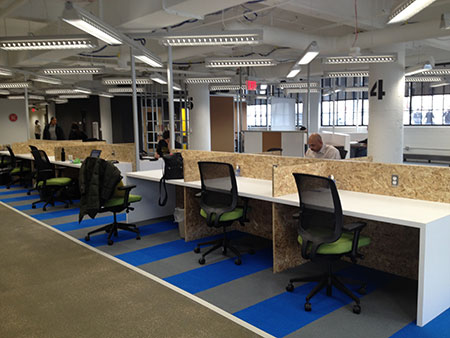 Getting the word out on coworking to the broader population in a region so fragmented and built on the automotive company pension model may be a challenge, but Lewan says the coworking movement is growing and is up to the task.

“We did Colab Week because a lot of spaces are opening, and a lot of older people and professionals don’t know what it is yet,” she says. “It’s a new concept to open ourselves up to the public and help foster collaboration across the spaces.”

For more on Detroit’s coworking spaces, visit the Detroit Co-Working spaces finder. For a great history on coworking across the globe, visit DeskMag’s timeline.