On November 6-7 in Bologna, Italy, leading scholars, researchers, policymakers, practitioners and social innovators will gather to further the discussion and movement around the urban commons.

The Conference on the Urban Commons is presented by the International Association for the Study of the Commons (IASC), a non-profit association devoted to understanding and improving institutions for the management of resources that are (or could be) held or used collectively by communities in developing and developed countries. Shareable is a partner for the event, as furthering the urban commons movement directly aligns with our Sharing Cities Network initiative.

Organizers have put out a call for papers for those interested in presenting case studies in which models of collaboration for the care and regeneration of urban commons have been realized.

Shareable connected with the Laboratory for the Governance of Commons (LabGov), an organizing partner of the conference, to learn more about the event and the future of the urban commons movement. The responses are a collaboration by members of the LabGov team.

Shareable: How did the idea for the IASC Conference come about? Who is involved in producing it?

LabGov: The idea of an international conference started taking shape after a meeting between Sheila Foster, an Albert A. Walsh Professor of Law and Co-Faculty Director at Fordham Urban Law Center of New York, and Christian Iaione, an Italian law professor who coordinates the LabGov project at LUISS Guido Carli University in Rome.

LabGov is an educational and research platform to gather and train a brand-new breed of professionals, scholars, and practitioners in the governance of commons, collaborative/sharing economy and social innovation. The project is also geared toward new forms of partnerships involving citizens, NGOs, public officials, local institutions and businesses to develop smart practices for urban and local communities. Iaione framed all this with the local/urban collaborative formula.

Sheila’s work is focused on understanding and affecting the legal system's role in contemporary urbanism. Through its innovative programs with other academic partners, the Urban Law Center is becoming a premier resource for exploring the role of current laws for the actual implementation of a global urban commons and has recently joined the LabGov project.

Their intellectual and professional exchanges gave way to a collaborative, forthcoming paper, “The City as a Commons,” that in turn exposed the need of a same-name conference to further explore challenges and opportunities at an international level. Therefore, Sheila and Christian advocated a direct involvement of the IASC.

This conference is perfectly in line with IASC goals of promoting an on-going knowledge exchange among different disciplines and expertise areas, while fostering scholarship and practical experiences about the commons.

This appears to be the beginning of a new chapter for the urban commons, one that more fully develops the concept. What have we seen with the urban commons movement up until now, and why is it now time to look at it in a new light?

The urban commons discipline actually comprises several fields of studies (city governance and local democracy, urban design and economics, urban sociology and geography, service design, land use and comparative law, just to name a few) but remains still understudied by scholars and it is often an unfamiliar terrain for both local institutions and citizens. Therefore, the primary focus of the IASC conference is to expand and explore this new frontier of a collaborative governance for the urban commons movement.

This growing movement is taking different shapes according to local situations and needs, and it’s finally gaining much deserved attention on a global scale. In Italy, for instance, a positive approach, pursued since 2012 by city officials in Bologna, produced a formal document called “Regulation on collaboration between citizens and the city for the care and regeneration of urban commons.” It opened the road for similar projects in cities like Mantua, Rome, Battipaglia and Palermo.

Also underway is “Collaborare è Bologna – Towards CO-Bologna”, a program specifically designed to support local democracy projects and strengthen the relationships between city officials and the local community at large. Those varied experiments, coordinated by our LabGov staff, are geared toward an “Italy of Commons,” a collective effort to collect and apply the best practices for a governance of the commons.

Similar projects are underway elsewhere in the world, thus putting under a new light and raising great hopes for a diverse urban commons movement around the world. The November conference is a key moment along this path, bringing together many experts, activists and pioneers in this field, including Richard Sennett, Tine De Moor, Silke Helfrich, Michel Bauwens, David Bollier and Ezio Manzini. It will be a great opportunity to give further impulse and clarity to urban commons experiments, particularly under a interdisciplinary approach.

All levels of local governments must find ways to collaborate with engaged citizens and associations to carry out initiatives, activities and even a local economy respect that sustain interest and needs of the general population. These collaborative governance efforts are also crucial tools to properly address and help in solving a widespread crisis engulfing urban areas and citizens across the globe. 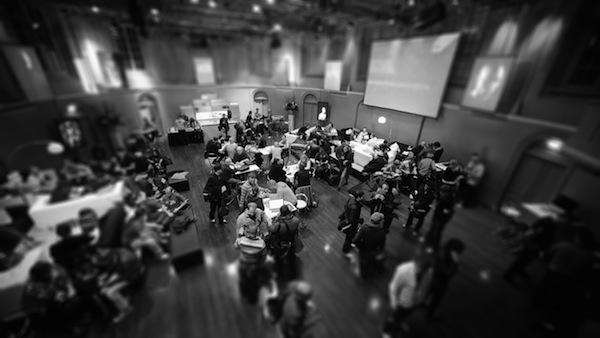 What’s your vision for the conference? What would you like to come out of it?

We plan two full days of plenary panels, keynote presentations, and parallel sessions, along with informal meet-ups and plenty of social interactions. A final roundtable discussion will focus on future strategies and proposals to further advance research projects addressing a variety of urban commons issues. There will also be an important presence online, to foster networking and user involvements, as detailed on the conference website. Our social media hashtag is #cocities.

One of the primary goals is to promote and seek a better understanding of concepts and potentialities of urban commons at different levels, such as: under what specific circumstances urban commons projects could emerge, what contributes to their durability and effectiveness, and what undermines them.

The conference will also stress the importance of developing an “urban commons narrative” in order to look at urban infrastructure, urban welfare, and urban development through the urban commons looking glass. Additionally, the event will focus on the many questions related to urban governance, exploring several frameworks for governing “the common good” and the city itself with a broader collaborative approach. And since the conference is promoted by the IASC, the overall objective is to start bridging together knowledge and expertise of many international “bright minds” to foster learning, inspiration and wonder – and thus sparking innovation practices able to directly involve local citizens and any committed individual.

Why is it important to further conversation around the urban commons movement?

The idea of the commons has a long historical and intellectual lineage ranging from Britain’s enclosure movement in early 1700s, to Garrett Hardin’s infamous Tragedy of the Commons story (first published on December 1968), to American political economist Elinor Ostrom’s Nobel prize-winning work on governing common pool resources in 2009. More recently, scholars from different fields have articulated a new “vision” of commons more apt for our current (and future) age.

A wider landscape that includes knowledge, cultural, and infrastructural commons, among others, is in order to create a varied ecosystem of communalities and shared practices around the world. With specific regard to the urban commons, while this has increasingly been subject to scholarly inquiry, there is still a lack of sustained attention to those research methodologies and approaches necessary to fully develop the very idea of the “urban commons” – along with the new challenges emerging in the study and implementation of its related practices. As mentioned, those are crucial steps to expand both conversation and focus on such topics, thus gaining the full attention of institutions, politicians, media and the public in general.

There’s a call for papers on any of the six thematic areas of the conference. What do you hope to see from these papers? Any advice to those considering submitting one?

The conference’s six research tracks will cover the main challenges in today’s international debate, including definition and mapping of urban commons, its political value and practical advantages for democratic societies. One of the tracks that is probably relevant to Shareable’s readers is the one devoted to the so-called collaborative/sharing economy as a foundation for a commons-based urban economy. We are looking for insightful approaches to address this growing phenomenon, for ideas that can help in defining, understanding and interpreting the “sharing economy” in a wider urban context.

Given that this trend seems to suggests more democratic and horizontal alternatives to the market-based circulation of goods and services across society, we are interested in understanding useful lessons and innovation practices that can be successfully integrated in the urban commons movement. Therefore, we are particularly interested in paper proposals focused on such issues, while also encouraging submission from students, scholars, and citizens invested in similar topics.

People could also attend the conference as a paper presenter or as an auditor. For paper submission, an initial abstract is required by August 10, 2015. The deadline for registration, to be included in the final program, is September 13, while the registration deadline for all other attendees is October 2. Draft paper is due in mid October. We are also undertaking all efforts to ensure enough funding to reimburse travel costs and participation fees of presenters coming from non-OECD countries.