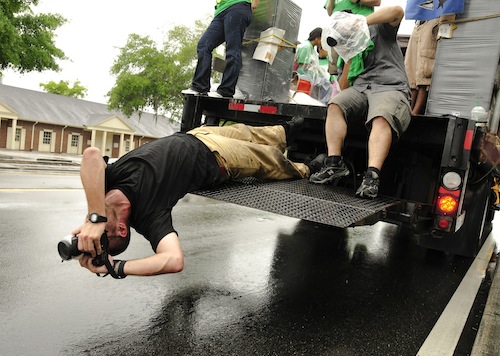 Jacques-Jean Tiziou — or just JJ — is a professional photographer based in Philadelphia, PA, working to innovate the way that creatives like photographers make a living and interact with the public. His photos have been used everywhere from corporate annual reports to local newspapers — and earlier this year, JJ's photos were selected to be part of a permanent installation at the Philadelphia Airport, covering almost 50,000 square feet of the facility’s parking structure.

He describes his focus on movement and action this way: “Whether it's dancers backstage, surgeons in the operating room, family at a wedding, lawyers in their offices, educators in their classrooms, or protestors in the street, I approach them all in the same way, with the knowledge that everyone is photogenic, and that the real world is full of beauty that often goes unnoticed.”

I talked to him about his new community-supported photography initiative, an experiment in applying new “crowdfunding” models to photography and to other media projects. 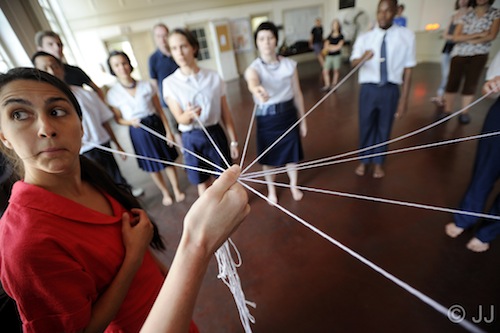 Jen: JJ, maybe you can start by talking about how digital technologies and online content sharing sites have changed photography?

Creative Commons licenses, which have become more common in recent years and are incorporated into sites like Flickr, are also complex. The idea is great for sharing, but still relies on the idea of artists only getting paid via commercial uses of their imagery. Creative Commons provides only for attribution, not contribution, so it helps other artists make derivative works, but doesn’t help sustain the media makers who created the work in the first place. 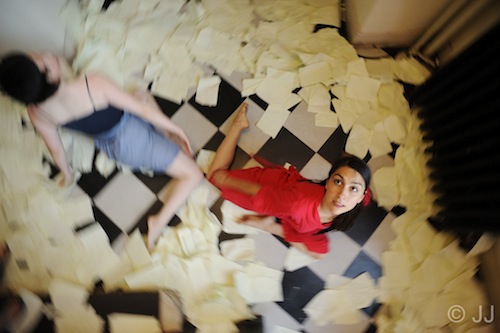 Jen: So you’re trying to get beyond this pay-per-use model, by asking people who are viewing and enjoying your photos through various outlets to contribute – either to make a donation or to make a monthly contribution to support you. Are there other models that you are following or that you've learned from?

JJ: There's not much yet in photography… digital technology has made it very easy for photographers to share their work (even to the extent of totally losing control of it), but we haven't yet figured out how to get our audiences to take a share in the creation costs of this work. The music world has started to do this with many artists out there using the internet to crowdsource support for their work. If every fan chips in a little bit, it can quickly add up to significant sums to help them make their music, working outside of the constraints of major record labels. It's a bit harder with the photography that I do, as much of it is far more custom. A musician might make one record that millions can enjoy, but many of the most powerful images that I create are portraits that are each most valuable to just a handful of people. But there's definitely power in crowdsourcing; just take a look at the millions that were raised for earthquake relief in Haiti via $10 text-message based donations — $10 doesn't solve the problem, but there's strength in numbers, and everyone's little contributions help the people out there in the field do more.

Now most of the audiences out there don't realize that a photo shoot ends up costing me a couple hundred dollars and several more hours beyond the shoot — the same thing that makes my pictures good also makes them expensive (there's a lot of overhead involved like gear repairs, liability insurance, archive management, etc.) But a small monthly contribution is a really easy way for someone to help me do this work; if all the folks who appreciate my work stepped up and contributed a few bucks a month, I would be able to do so much more of this kind of work.

One project I heard about recently is Photophilanthropy. They've got the right ideas about what subject matter is important, but doing it all on the volunteer model means that photographers have to either be independently wealthy, or maybe each one can only do one special self-funded project here and there… whereas what I'm hoping to do is see a different model emerge where photographers within the community can actually get paid for the work that they share, and support a sliding scale by garnering direct support from their community — more of a grassroots approach rather than one that relies on big funders from above. 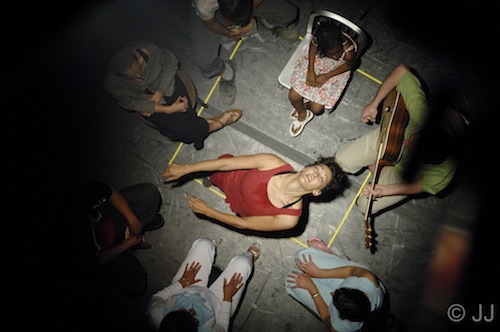 Jen: You're launching a new site called "community photography" — will you explain what you're trying to do and how it works?

JJ: Well, it's more of a revision of my own website; in spending a lot of time and energy trying to help tell other people's stories, I've not done a very good job of telling my own, and this is about rectifying that. In 2003, I started two parallel careers: one side was my commercial operation, and the other side was where I began acting more like a public art nonprofit. It was not just in how I chose to fund the projects, like self-funding projects, or going far above what I was being paid for — but also in how I chose to share those images, making my unedited takes available to the communities that I photographed. It's this non-profit arm of JJ Tiziou Photography that did things like shooting 30,000 frames of the Philadelphia Live Arts Festival in three weeks, when their budget really covered only a handful of pictures.

While the installation that I'm working on at the Philadelphia International Airport is going to be one of the largest murals in the world, an even larger work of public art is the network of images that I've built — in the countless community members that I've celebrated through my work. It's clear that this work is appreciated: when I got around to creating a fan page on Facebook for JJ Tiziou Photography, nearly twelve hundred people signed up in the next few days. The challenge is simply that most of the people that benefit from this work don't understand what it costs me to produce, and even if they do, they assume that someone else has paid for it. It's easy to share my images with them, so much harder to share a week of admin work or the replacement bill for another broken lens.

So now with a clearer emphasis on fundraising on my site, I'm reaching out to my community to let them know that in order to do the work that I most want to do and distribute it in the ways that I want to, I'm going to need their support. It's work that I consider critically important; We live in a world flooded with negative imagery, and hunger for images of real joy to inspire us. While much of the media idolizes celebrities, we need only look around us to find an abundance of beauty in our own neighborhoods. If I just followed the mainstream media market, I'd be another one of these guys. In order to work outside of the mainstream media market, I need my community to share in the costs of creating this work. 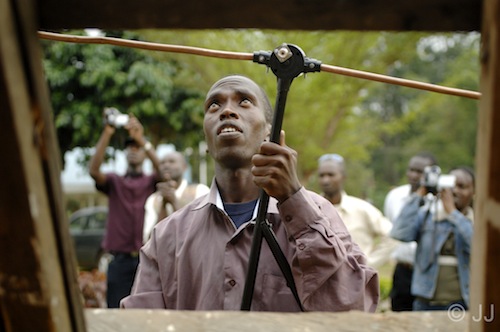 Jen: How have you been getting the word out, and what as the response been so far?

JJ: I've just barely started… I had the idea of operating this way five years ago, but I didn't actively promote the idea, because I didn't want to alienate my commercial clients by asking for little donations on the side when they were already paying me fairly hefty fees. The "community support" section of my website already existed, but wasn't really accessible so most of the people that I shared my work with never saw it. Since then, I've learned a lot more about both the power of the media in our society, and have come to consider my work more through the lens of public art or community media, and worth actively fundraising for. And I've found that my corporate clients are excited to be working with an artist that is engaged in their community rather than just doing the same old commercial work.

The main thing standing in the way of this is the fact that most people think that digital photography is "easy," "free," and "instant," and that crediting a picture is the same as paying someone for it. (Sadly my landlord won't let me just credit them for my housing…) – but as I've started to actually talk about the issues involved in doing this work, it's seemed to make sense to people… A nice little handful of community members have signed up to make small payments of $5 or $10 per month without any prompting. It's not huge yet, but enough that it'll cover a camera repair, or make it a bit easier for me to do a pro-bono shoot for something that I really care about.

Media amplifies power: This is why people and businesses already in power spend so much on advertising. This is also why it’s critically important to invest in making media to support social change. Strong images help take powerful moments and make them transcend time and space: whether it’s a political action, an artistic performance or a community celebration, photographs allow it to live on into the future and reach wider audiences.

I'm hoping that as I launch my new site and become more explicit about fundraising for this work, more people will come out and contribute in order to help me help others. It's an investment that has multipliers, as my work helps empower other artists and activists to better tell their own stories and build support for the amazing work that they're doing. 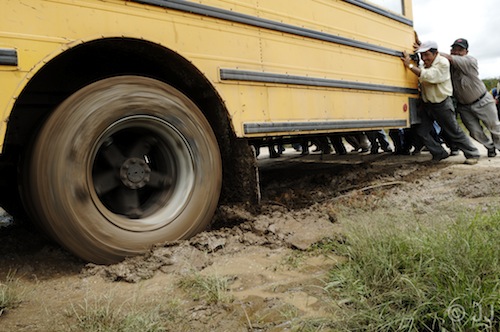 Jen: Have you considered expanding this idea to work with other independent photographers?

I'd like to see a revolution in media-making. The potential for it is so close: If every person that is a fan of JJ Tiziou Photography on Facebook contributed $5 a month, that would cover all of my operating expenses and even start to pay me a bit of a wage for this work. If people similarly invested in other independent media makers, we could have an explosion of exciting new media. 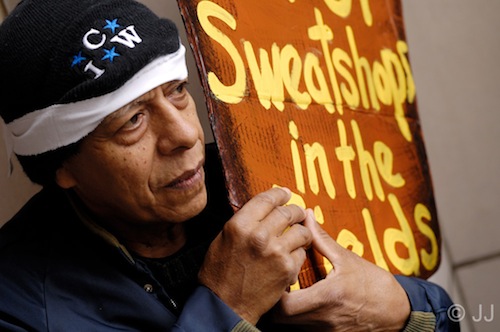 You can learn more about Tiziou's community-supported media initiative in the “my dream” section of his website.