Be Me: Black Men Engaged in Sharing and Community - Shareable
Skip to content 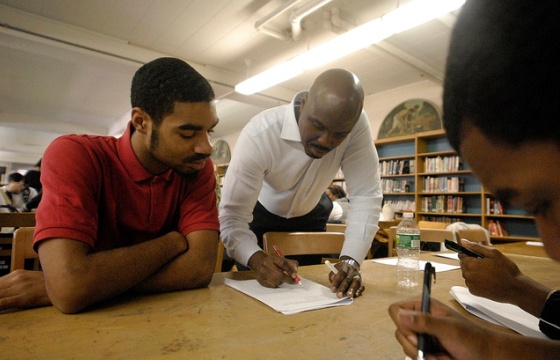 In 2011 BMe (pronounce “Be Me”) was launched by the John S. and James L. Knight Foundation and the Open Society Foundations. The foundations wanted to empower black men who were actively engaged and making a difference in their communities. Aware of the stories that are often shared interpersonally and in the media, the foundations sought to develop another narrative. The people behind BMe wanted to look at the positive actions of black men in urban environments instead of approaching them as a group that needed to be fixed. Members of the BMe team asked the question: What do you do to make your community stronger? In eight weeks they received and posted more than 2,000 answers from men in Philadelphia and Detroit.

“So many brothers are doing more than their fair share to make our communities stronger,” says Trabian Shorters, vice president of communities for the John S. and James L. Knight Foundation. “By providing funding, BMe hopes to both give them the boost they need to go further with their work, and bring more people into the growing ranks of engaged black men.”

The 2012 grant cycle awarded funding to 10 men in Detroit and 10 men in Philadelphia. Awards ranged from $5,000 to $40,000 for community projects including literacy programs, book clubs, and mentoring programs. Andre Dandridge, founder of New Young Fathers, received money to design and facilitate workshops in Detroit to help ensure that young men were more equipped for fatherhood. Alex Peay, who now serves as a member of BMe’s community engagement team, was granted funds to strengthen his organization, Rising Sons. The after school program arranges for college students and recent graduates to mentor high school students and then trains the high schoolers to mentor elementary school students in the area. Curtis Lipscomb’s grant enabled him to train 22 Detroit youth to become advocates of social issues facing the LGBT community in their city.

While previous grantees are hard at work utilizing their resources, BMe has started a new grant cycle with the theme, “Call for Community Impact.” Each chapter has up to $200,000 to give to programs and projects in their cities. If you are a black man living in Baltimore, Philadelphia or Detroit, are over the age of 18, and have uploaded a video to BMe’s site, then you’ve already met most of the criteria. While last year’s funding went to individuals, this year there is a particular emphasis on partnerships and collaboration. Hoping that BMe members will share ideas and build upon them together, as the founders of Philly’s Live & Let Live Coalition did, grants and future programming are being geared more towards collaborative efforts.

This year BMe will expand to Pittsburg, Pennsylvania and they are looking to establish chapters around the country, each operating with a “simple truth” at their core: “That black men are assets to our nation. That there are thousands of black males who – by example – inspire others to get involved, to persevere and to lead on issues and opportunities facing the community.”

Josh Rivers of BMe Philly shares his story about what he does for his community: