Collaborative Consumption: It's Not about the Money - Shareable
Skip to content 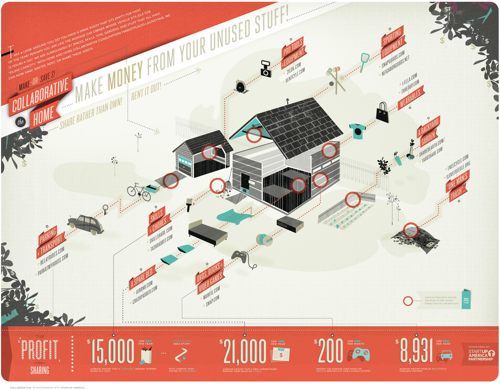 The Collaborative Home is an infographic by Collaborative Consumption that visualizes the many assets in our homes that can be shared or swapped for profit. Created in partnership with the Collaborative Fund and Start-Up America, the infographic draws attention to a number of Shareable’s favorite collaborative consumption startups, including AirBnB, Neighborgoods, Swap.com and RelayRides. It also illustrates the sort of money that users stand to make with some stunning statistics, including:

Of course, while infographics like these serve as effective viral marketing, they don’t tell the whole story. Focusing on the profit that users can reap from collaborative consumption makes for a good sales pitch, and these sort of numbers are convincing. But profit should not be the only benefit touted. To create lasting and significant change, the sharing economy must be more than another form of “happy capitalism”.

The sharing economy can make users some needed cash, and in an economy like this, you can’t ignore the potential impact of that. But when collaborative consumption frames relationships as ways to make money, we’re back to square one. Instead of corporations commodifying relationships, we’ll be doing the commodifying—small micro-corporate nodes in a retrofitted yet fundamentally flawed system.

The sharing economy is about more than transactions: it’s an opportunity to collaborate, and to borrow some words from Craig Newmark, “give each other a break”. It’s a way of diversifying income while building resilience and keeping money in your local economy. It extends the life cycle of products and lessens the burden of ownership. It builds social capital and fosters a collaborative mindset among citizens. And last but not least, it engenders better relationships among individuals and encourages new experiences. There’s a reason that AirBnB pitches their service with the tagline “travel like a human”.

Focusing on the profit motive reduces the scope of the sharing economy, from a transformative cultural movement to an easy way to make a quick buck. Sharing isn’t just a way to make startups profit and build a new economy of micro-entrepreneurs—it’s a cultural movement that has the power to build community, engagement and a new, more sustainable peer-to-peer economy, transforming how we define our interpersonal relationships in the process.