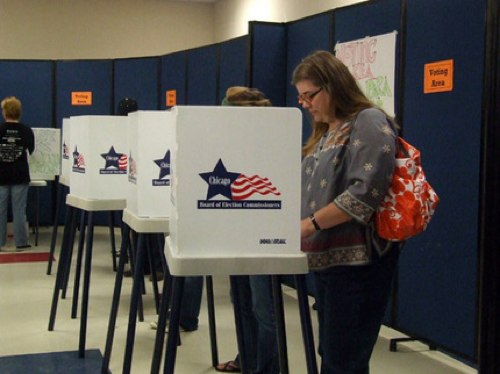 Last spring, Chicago’s 50 aldermen each received slightly more than $1.3 million to spend on infrastructure improvements in their jurisdictions, at their discretion. Known as “menu money,” this annual fund was established by the Chicago City Council in the mid-1990s to address the uneven distribution of infrastructure investment throughout the City. In 49 of the 50 wards, the alderman and his or her staff did business as usual: taking constituent requests, conducting needs assessments, and consulting their lists of supporters to decide how to spend their funds. In Rogers Park, the process was wholly different.

As 49th Ward Alderman Joe Moore tells the story, in 2007 he was at the U.S. Social Forum in Atlanta and attended a workshop on this “really cool process” called “participatory budgeting” (PB). The process allows citizens to decide directly how to allocate all or part of a public budget, typically through a series of meetings, work by community “delegates” or representatives, and ultimately a final vote. It was first implemented in the city of Porto Alegre, Brazil, in 1990, and has since spread throughout the developing world and parts of Europe and Canada. Activists and scholars generally champion PB as pro-poor, pro-democracy, and pro-“good governance.”

Upon hearing the presentation and learning that the process hadn’t yet reached the U.S., Alderman Moore thought it would be great if he were mayor and could try it out in Chicago—a city which, as well all know, is notorious for backdoor deals and money misuse. Then a light bulb went off: Moore realized that he could use the process to allocate his menu money, over which he has total discretion.

Faced with the difficulty of starting a fundamentally “bottom-up” process from the “top down,” Alderman Moore invited community leaders from diverse civic, religious, and political organizations in the ward to form a participatory budgeting steering committee. Throughout the spring and summer of 2008, the steering committee participated in a series of workshops led by “The Participatory Budgeting Project” to decide on the rules and procedures for the 49th Ward process. Though they made the broad governance decisions at the outset, the steering committee met continually throughout the process to further develop and adjust the procedures.

The 49th Ward participatory budgeting process began in November 2009 with a series of nine assemblies held throughout the ward—eight in different neighborhoods and one ward-wide meeting for Spanish-speaking constituents. Open to all residents, the neighborhood assemblies introduced the principles of PB, explained the menu money budget, and asked participants to brainstorm and discuss ideas for infrastructure projects in the ward. Ideas ranged from sidewalk repairs and speed humps to historical markers and dog parks.

At the conclusion of each neighborhood assembly, participants volunteered to serve as “community representatives” in the next phase of the process. From December 2009 through March 2010, over 60 community representatives met regularly in six thematic budget committees—Streets, Transportation, Public Safety, Traffic Safety, Parks & Environment, and Art & Other Projects. The committees researched, developed, and ultimately proposed projects for the ward-wide vote. Representatives used the ideas suggested at the neighborhood assemblies as starting points, but also contributed their own project ideas, assessed community needs, and met with technical “experts” and City bureaucrats to determine the feasibility of projects. Ultimately, the six committees put forth 36 project proposals on the participatory budgeting ballot.

The rest of Chicago will wait over a year for their next election; 16-year-olds will wait another two years; and undocumented immigrants will wait indefinitely. But all residents in the 49th Ward age 16 and over, regardless of legal status, were invited to come out and vote this April to decide their ward’s infrastructure budget. Over 1600 people showed up, thanks to a massive Get Out the Vote Campaign led by community representatives. Residents were asked to weigh street resurfacing against showers at the beach and murals against police cameras as they decided how to cast their eight votes (one vote per project, regardless of committee or price).

14 projects won the most votes up to $1.3 million, and thus will be funded. Winning projects run the gamut from the more traditional to the “sexy,” including, among others, ward-wide sidewalk repairs, bike lanes, artistic multifunctional bike racks, solar garbage containers, street resurfacing projects, and street lights. Most projects will be implemented in this year’s construction season. Some of the more involved and complex projects, like the dog park, might have to wait until next year.

Perhaps the most exciting aspect of the 49th Ward PBprocess was that it encouraged original and deep thinking about ward infrastructure among “ordinary” residents. Three women, for example, walked all of the sidewalks in the ward in the middle of Chicago winter. Representatives on the traffic safety committee developed a detailed system to prioritize the traffic intersections that posed the most serious safety risks, and deliberated over the course of three two-hour long meetings before making any decisions. The Streets Committee created a complex rating system to assess street deterioration, and the biking sub-committee on the Transportation Committee came up with a series of progressive bikeways proposals after researching successful models in other cities.

The creativity, profundity, and decency with which community representatives thought about ward infrastructure often seemed to contrast sharply with the City’s bureaucratic and at times arbitrary-seeming approaches; for some, begging the question of what qualifies one as an infrastructure “expert.” Given that participatory budgeting is simultaneously celebrated by some for its “empowering” and “transformative” potential and criticized by others for making people complicit, it is important to note that committees’ acceptance and resistance to the City’s rules varied significantly.

In several instances, committees challenged City bureaucrats outright about issues of project “feasibility” and pricing. Resistance rarely proves effective over the course of only four months, however. Ultimately, the representatives had to accept and play by the City’s rules this year. It remains to be seen whether those who have challenged the City will organize further and mount their resistance in future years, perhaps into successful campaigns.

Bike Lanes: A very active and activist sub-committee on the Transportation Committee focused exclusively on projects that would improve the biking infrastructure in the ward. After doing their research and thinking seriously about ways to make the streets safer and friendlier for bikers, the Committee members came up with a series of progressive project proposals that involved shifting the curb and designating bike-only streets. The Committee met with the City of Chicago “bikeways planner,” only to find that the City’s bikeways plans were much less ambitious than their own. The Committee proposed and argued for their ideas, but was told that plans of that nature were not “feasible” this year. After much debate, the Committee ended up proposing bike lanes of the City’s type on the final ballot, which won the second most votes of all projects.

Several of the committees did not challenge City bureaucrats or experts, and in fact took their guidance very seriously. The Public Safety Committee, for example, put on the ballot two police camera projects that were suggested to them specifically by the local police district. The Traffic Safety Committee had faith in the engineers who conducted traffic studies and adopted their recommendations for infrastructure changes in their project proposals.

While some representatives resisted the City’s rules and supposed-expertise, and others chose to abide by them, many opposed policies without challenging the “powers that be.” Representatives in several committees passionately discussed the infrastructure policies, rules, and operations of the menu money fund that they felt to be unfair, yet did not move forward with resistance efforts. Specifically, many expressed anger at what they believed were inflated prices and ill-devised systems for project procurement, taking issue with the fact that “menu money” projects could only be implemented by City agencies (where possible), and had no preference for local labor. Despite their discontent, these representatives did not challenge the City—at least, not this year.

For all of the interesting and exciting ways in which people have engaged with infrastructure in the 49th Ward participatory budgeting process, it’s important to note that participation has been disproportionately skewed towards middle or upper-middle class and disproportionately white residents. This experience runs contrary to the reputation of participatory budgeting, known as a process often run by and for the poor and marginalized in Brazil and elsewhere.

Some have suggested that the type of funds available to be allocated by the process—for infrastructure, rather than services or programs—presented a challenge. Thus far, no one has conducted a study on the topic, and discussion is based solely on speculation. Suggestions that low-income people and minorities don’t care enough about infrastructure to participate seem to run a bit counter to the evidence, however. Parks, for example, are heavily utilized by the poor. There is far more public art in minority neighborhoods in the City, such as Pilsen, than in many majority-white areas. Just a few years ago, a group of Latino mothers organized for a new traffic light in the 49th Ward.

In my opinion, participation, or lack thereof, was a reflection of initial outreach efforts. Most publicity for the neighborhood assemblies was done through flyering and email blasts from the Alderman. There was very little, if any organizing. Put quite simply, people didn’t know about the PB process, and those who did see the flyers weren’t taken in by the slogan “You Have a Date with Democracy.” In future years, more organizing is certainly needed. In a world of politics where “help” for the poor often means delivery of services, efforts may also have to be made to redefine or broaden the notion of infrastructure.

Next Steps in Participatory Budgeting in the 49th Ward

The 49th Ward is already planning for project implementation and working to transition the process through 2011. Community representatives and steering committee members continue to be involved in both aspects. The Art & Other Projects Committee, in particular, is working with the Ward Office to write requests for proposals for the mural and artistic bike rack projects, and organize another round of public voting to decide on the designs.

Beyond implementation, many of the committees have already discussed ways to stay involved in 49th Ward infrastructure issues. The biking sub-committee, for example, has requested to serve as Alderman Moore’s ongoing “bike advisory committee.” Yet the success of a participatory budgeting process should not be judged solely on its effects on one group of people during a single year. Success should be measured, at least in part, on the ability of the process to provide a consistent avenue for public participation in matters that are open and accessible to all. One likely challenge of the process next year will be to build on the knowledge and perspectives gained by the representatives and steering committee this year, while at the same time keeping the process open to new-comers. Will the experience gained by some crowd out the entrance of others? Will those who were involved last year turn into the participatory budgeting “elites”? Will process governance become as participatory as the process itself?

This article originally appeared in AREA Chicago, and is republished here with the permission of AREA.

"Time for Participatory Budgeting to Grow?" at Gapers Block