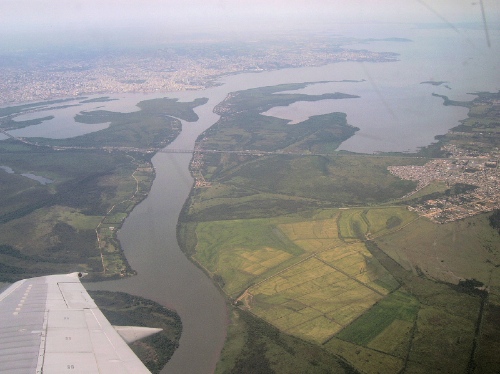 With many US city governments now declaring bankruptcy and cutting vital services, local officials may be wise to take the lead from Brazil and get their constituents directly involved in tough budgetary decisions. Brazil's example shows that a process called participatory budgeting can balance power in the budgeting process and ensure citizens get a fairer share of increasingly scarce public funds.

In the late 80s, long before the global finance crisis, residents of Porto Alegre, Brazil were having trouble getting essential services from their government. The city was bankrupt and residents were lacking proper sewage, clean water, and other necessary infrastructure due to rampant corruption. In order to more equitably and efficiently distribute scarce public funds, Porto Alegre became the first town to formally adopt a process called participatory budgeting. This process allows its residents to directly decide how public funds will be spent though open deliberation in budget assemblies and voting. Since 1989, when the program started, city-wide participation in budgetary decision-making increased from 1,000 to over 50,000, while doubling the town’s access to many essential services.

Yet this process remained largely unheard of in the U.S. until last year when it sprouted up in an unlikely place, Chicago’s 49th Ward, a community which speaks over 80 different languages within two square miles. Last year, residents of the ward, invited by their city representative Joe Moore, made proposals and voted on its $1.3 million discretionary budget for capital infrastructure. At a series of neighborhood assemblies, residents brainstormed project ideas and selected representatives who would transform those ideas into concrete proposals. Representatives split into six thematic issue committees to spend four months meeting with experts, conducting research, and developing budget proposals before the big vote. As Moore wrote in a letter to his constituents, it "exceeded even my wildest dreams. It was more than an election. It was a community celebration and an affirmation that people will participate in the civic affairs of their community if given real power to make real decisions." Now some candidates in Chicago’s other wards are running on a participatory budgeting platform.

Participatory budgeting as a model usually allows residents to propose, discuss, and vote on public spending projects. It is frequently initiated to address resource inequalities, as well as corruption in the budget allocation process and lack of transparency and accountability. It can also have the potent side effect of creating a more engaged and empowered citizenry through a taste of direct democracy.

In most cities, residents are allowed to decide on no more than 20% of the budget, and often it is only the discretionary portion of the budget (non-necessities) that is voted on. This limits the damage of uninformed mistakes, but the public may actually become more informed and make wise decisions about services that their lives depend on. As the community becomes more involved and the process refined, additional portions of the budgets may be included. A larger pot can encourage more participation. One town in Brazil puts 100% of its budget up for public discussion and vote after positive experiences.

While participatory budgeting can cost cash-strapped municipalities extra money to hold assemblies, publicize, vote and add staff to deal with the requests, residents often end up more motivated to fulfill their tax obligations, because they feel their money is better spent with less money going to pork barrel projects. Some participatory budgeting processes have also led to increased local employment through local hiring prioritization as selected projects are implemented, improving the overall local economy.

Another side effect of a good participatory budgeting process is greater social harmony. Government officials can less be blamed for corruption, and unequal allocation, and so community-government relations may be improved. And as residents of all walks of life come together to listen to each others’ needs and be heard in a fair venue, trust, understanding, and collective wisdom may blossom. The process is not about winning, but as a one participant mentioned, “It's more about being happy for someone else to be able to live a better life."

Participatory budgeting is not just for city-wide budgets, some nonprofit agencies are adopting it, too. Toronto Community Housing has given its capital budget ($9 million currently) up to its tenants since 2001. Tenants are encouraged to propose ideas for improving their community and democratically decide their priorities. The top ideas are pitched at voting events, where tenants from different buildings come together to listen to each other and view display boards that each buildings creates as part of their proposal. Using “dot-mocracy”, every building selects a delegate who gets sticker dots with which they vote for the best ideas. Listening to active tenants talk about their experience, you get the impression that this is a fun community bonding event and less of a democratic chore. Many of them being marginalized and low income, this is also one of the more empowering things they’ve done.

In New York, City Representative Joe Moore from Chicago is promoting the idea of participatory budgeting to universities such as CUNY (City University of New York), as they experience cuts from decreased public funding. Even in good times, budgets are often a source of conflict between college administrations and students. Students might be less frustrated and dissatisfied with their education if there was more transparency and they had some say over how their tuition is being spent, increasing student retention.