Bikenomics: How Bikes Can Revitalize Our Cities - Shareable
Skip to content 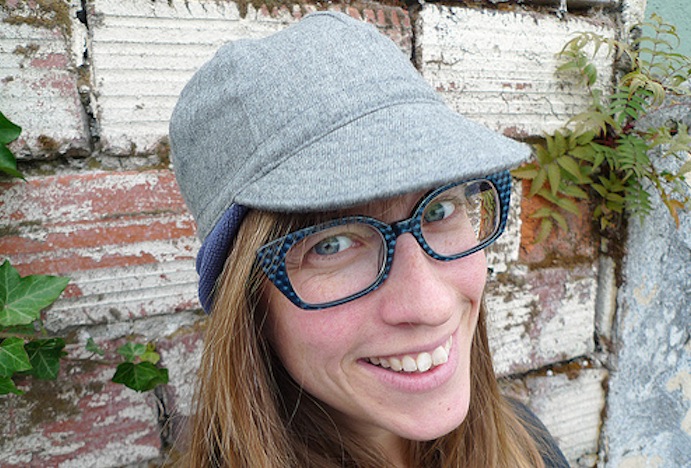 Elly Blue is no stranger to bicycling issues. A longtime cyclist, zinester and blogger, Blue has established herself as a leading voice of the urban cycling movement. In her new book Bikenomics: How Bicycling Can Save the Economy, she dispels some of the myths surrounding the cycling movement and provides numerous examples of how making streets bicycle-friendly is good for business.

Recently, Shareable chatted with Blue about the positive economic impact cyclists make on a community, the fine line between creating bike districts and gentrifying a neighborhood, and the importance of creating better cycling infrastructure.

Shareable: Nutshell it for us, Elly. How can bikes positively impact urban economies?

Elly Blue: Bicycles are the ideal vehicles for navigating sprawling, car-centric environments quickly, safely, and affordably. Also, riding a bicycle is both fun and healthy, and biking is an effective way people build community and create lasting, positive changes in our lives and the world around us.

In Bikenomics, you note that after Magnolia Street in Fort Worth, Texas was restriped to include bike lanes, restaurant revenue along the street rose significantly. Similar results were seen in Manhattan where, despite merchant outcry, sales income went up as much as 50% around the time that bike lanes were installed. What are some other stories that paint the picture that what’s good for cyclists is good for business?

The major outcry against urban bike projects comes from local business owners who are afraid that losing car parking will hurt their business, or who have the perception somehow that customers on bicycles don't carry the same kind of money or loyalty as customers in cars. But these are the same folks who tend to benefit the most—the results that you mention here are pretty much consistent every time. 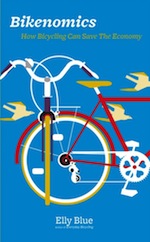 The story that needs to be told, and the one I try to tell in the book, is that the latent demand for bikeable streets is so tremendous that every time modern bike parking or bike lanes get put in—even when it's done badly—the result for the local business community is a boom. And that can actually be a problem—it isn't that bikes are bad for business, but rather than bikes can be so good for business that it creates upheaval. So when a city does a showcase bike district, property values go up, rents go up, lower-income residents and their local businesses get pushed out. It's important to build out cities for bikes all at once, and also to have plans to get ahead of the threat of gentrification in the neighborhoods that get bicycle treatment first.

You start the book off by dispelling the myth that cyclists don't pay for the roads they use. It’s a layered issue, but your argument is that we all pay for roads, regardless of how we use them. Why did you choose to kick off the book with this clarification?

There's this pervasive myth—that continues to be spread, I'm sorry to say, by pro-road interest groups who should know better—that every time you drive your car, your gas taxes and other expenses are 100% paying for the road you drive on. That hasn't been true since we began building Interstates in the 1950s; currently, drivers pay for half. That's it. The myth is so deeply embedded in our cultural assumptions that it really lends itself to this idea of ownership, that when you own a car you also own—not just the road, but the entire commons. So that's the first one that has to go.

You point out that while it’s nice to create urban bike infrastructure, that’s only part of the solution; that to really create a transportation revolution, the infrastructure needs to extend to outlying areas too. Can you expand on this? Are we seeing too many half measures?

Any amount of bike infrastructure is probably a good thing. Of course I want to see more places just bite the bullet and go all the way—Corvallis, Oregon, for instance, did this back in the 1970s, making sure that you can ride a bicycle on literally every road in the city. The cities that can do that first in this new era will be the ones that reap the biggest economic and publicity rewards as a result. But I know that sometimes it requires political miracles just to get one bike lane that's five feet wide instead of four on a main drag, never mind getting it out of the door zone and the rest of it.

I think it's important that people do what they can, even if it's small. That said, it seems to be much easier for a city planning department to heed demands for bike share, for instance, when they're coming from a rapidly gentrifying retail strip with condo developers throwing their weight around than when those same exact requests are coming from the neighborhood at the outer edge of the city that's populated mainly by immigrants.

City leaders need to step up and be bold—they'll be thanked in the next election even if not in the local paper—but activists and advocates also need to work together and listen to each other so that bicycling doesn't just become an amenity for people who can already afford to enjoy the economic benefits it brings. 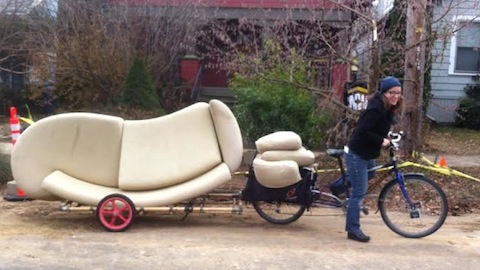 Move a sofa, you say? No problem. Photo by Ellee Thalheimer.

There are several success stories in the book about towns, including Long Beach and Memphis, that are embracing cycling and getting great results. What can other cities, despite geographic and demographic differences, learn from them?

The cities that are doing the most visionary things for bicycling now have all been learning from each other for years, behind the scenes, by various means. If your city isn't quick to embrace the idea of improving bicycling conditions, one of the best remedies for this can be to see if you can bring city leaders out on a bike ride. Or better yet, bring them to visit a similar city that is successfully moving forward with bikes, or bring leaders from that city to yours. Getting together in person and going on a bike ride is the best way to create meaningful activism at a grassroots level; it's also important for traditional leadership.

Not all businesses will see the immediate benefits of better cycling infrastructure. You’ve written about the adjustments that places like furniture stores or auto shops will have to make. How do you make a case to these businesses that prioritizing cycling is a good thing?

Safety is a big benefit. I'm not talking about bike safety, but of mitigating the threats posed to everyone in a community by streets designed to move car traffic quickly. Protected bike lanes are one way to do this really well—they can create an environment where injury rates for everyone, not just people bicycling, are cut in half.

That's a big part of the value—sure, you're attracting bicycling customers, who are shown to be loyal spenders, but you are also creating a situation where cars are going a bit slower, more people are walking, the neighborhood is more cohesive—this all adds up to eyes on the street, which just about every business relies on. Some will have to adjust more than others, but none of this is insurmountable.

In addition to showing how better bike infrastructure can revitalize urban economies, the book shows how cycling can address issues such as climate change, obesity, and social isolation. What are your hopes for this book project? What takeaways do you hope readers get?

The thing that blew me away while researching this topic—the thing that made me realize this book was necessary—is the vast and unsustainable cost of our national road infrastructure, and just how deeply invested we are in something that is constantly at the verge of collapse, both financial and physical. It isn't just roads; our agricultural system, our health care complex, the banks, the retail sector, sewer systems—we've come to absolutely rely on these systems that are too big to fail. Housing failed, and we're still living the impacts of that now.

Bikes are like the equivalent of the movement to move back into foreclosed houses, or to get back to small farms and backyard gardening. People have the power to get organized and take the basics back into our own hands—and that's what I hope my book inspires readers to do, whatever that means to them.