Are Bike Lanes Expressways to Gentrification? - Shareable
Skip to content 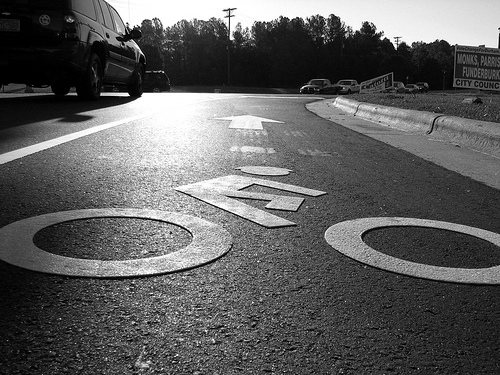 Paul M. Davis|August 30, 2011July 30, 2019
A plan to widen the bike lane on Portland’s N. Williams Avenue has reignited an ongoing debate over whether cyclists serve as the front line of gentrification. Jonathan Maus of Bike Portland reports that many in the neighborhood believe the attention given bicycle safety issues, in a community where pedestrian safety has long been ignored, represents a double standard. At a public meeting about the North Williams Traffic Safety Operations Project last month, Donna Maxey was among the attendees who raised these concerns:

"What is causing the anger and resentment is that it's only an issue of safety now that whites are the ones who are riding bicycles and walking on the streets. Because we have been in this community for years and it has not been an issue and now it's an issue. So that's the resentment you're hearing…years of people being told, you don't count, you don't matter…but now that there's a group of people who's coming in that look like the people who are the power brokers — now it's important. That's the anger. That's the hurt." 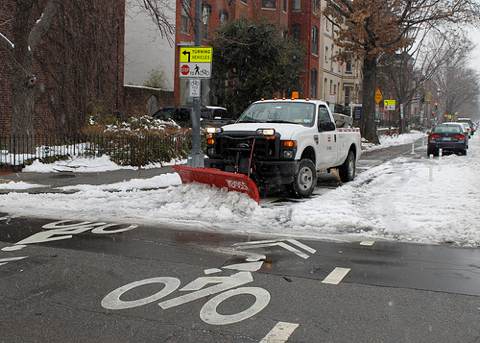 This is only the latest salvo in a debate taking place in many of the nation’s cities over bike lanes and how they affect disadvantaged communities. In Washington DC, where a 31% increase in white residents in the past decade has been met by an 11% decline in the black population, debates over gentrification have reached a fever pitch. As a recent New York Times article notes, in some DC neighborhoods bike lanes are seen to indicate the impending displacement of low-income communities:

Some of these poorer residents saw revitalization as code for efforts to drive them out, and the building of dog parks and bike and streetcar lanes as efforts by affluent whites to re-arrange spending priorities to suit themselves.

This echoes sentiments voiced in a 2009 Portland Mercury article:

"When initiatives for cycling come through, there are questions about who will benefit from bike lanes," says Paige Coleman, director of the Northeast Coalition of Neighborhoods. Coleman says conversations about biking being a "white thing" have come up often in recent years. "Some communities call the bike lanes the 'white stripes of gentrification,'" she adds.

As a white male who uses a bike as my primary mode of transportation, my initial reaction to these reports was one of reflexive defensiveness. After all, the health and environmental benefits of cycling are well-documented and universally beneficial. But it’s worth reconsidering our assumptions. The pet causes of affluent whites have long received more attention than immediate issues affecting those in disadvantaged communities. And while making bicyclists safer on the road might seem to benefit everyone, such city infrastructure initiatives have complex political, race and class components. 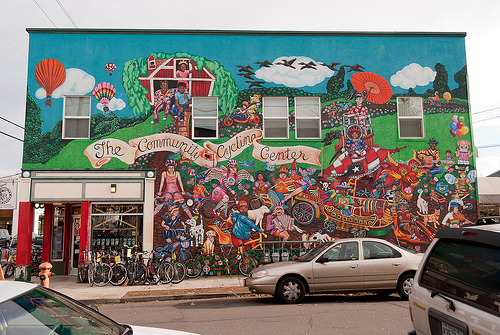 In Portland, the Community Cycling Center (CCC) is researching the resistance to cycling in low-income and non-white communities, and opening a dialogue that gives all stakeholders a place at the table. Operating under the slogan “the bicycle is a tool for empowerment and a vehicle for change,” one of the CCC’s primary initiatives is the Understanding Barriers to Bicycling project. The project’s 2010 interim report provides a limited but compelling look at bicycle usage in the city’s African American, Hispanic and African communities in north and northeast Portland. Though 52% of the respondents to the surveys conducted at six neighborhood events stated that they rode a bicycle, the survey revealed disparities in the attitudes toward bicycling between the three groups. Cost was considered to be a major barrier for a majority of Hispanic and African respondents, while African-American respondents were more likely to be concerned about their lack of knowledge about bicycling laws and rights and the feasibility of traveling with children.

Some people of color who attended Graves' workshops were nervous about biking because they feared the police will racially profile them and pull them over, says Graves. In September, African American Portlander Robert James tried to fight a drug charge on the grounds that the arresting officer may have racially profiled him for ostensibly rolling through a stop sign on his bike.

Many of the comments to the original Bike Portland post indicate that this discussion has inspired the same reflexive defensiveness among some cyclists that I experienced. But institutional racism exists whether or not you choose to acknowledge it, and evading the issue only continues the cycle of disenfranchising the poor and minorities from city planning processes. Angie Schmitt at Streetsblog eloquently articulates what’s at stake:

Changes to our streets are often the most visible signals of government power in most of our lives. As such, infrastructure decisions are inherently political, and those with greater resources have always held an advantage in seeing their wishes enshrined in concrete and pavement, or whatever the case may be. 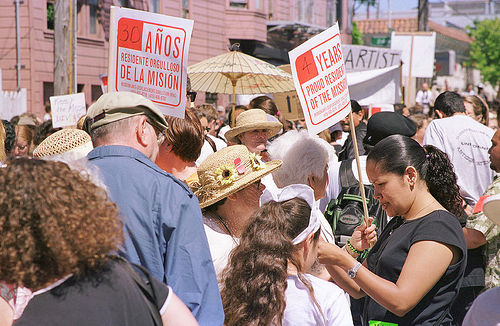 Photo of a demonstration organized by San Francisco's Mission Anti-Displacement Coalition by Bringo on Flickr.

Improvements such as bike lanes increase the perceived “livability” of a neighborhood, serving as a sign to developers and housing speculators that a neighborhood is open for business. In this way, bike lanes play at least an indirect role in making neighborhoods too expensive for low income residents. In addition to discussing these issues, there must be serious consideration of alternative housing models that reduce the displacement of low-income communities. Commons-based housing models such as limited equity cooperative housing and community land trusts could serve as a corrective to real estate speculation and help preserve the character, culture and diversity of these communities.

Gentrification is a significant problem in our nation’s cities, one that relatively affluent white people are complicit in, no matter their intentions. This is an ongoing conversation that we must make space for, and not mistake bike-centric urban development to be a universally-beneficial effort lacking racial or class components. Bernie Foster, publisher of Portland’s African American newspaper The Skanner, urged his readers to get involved in the discussion, writing “often the squeaky wheels are the ones that get the grease.” It’s a sentiment that will sound familiar to cycling advocates, who have struggled for decades to be included in infrastructure decisions. In this case, they’re the ones who must listen.