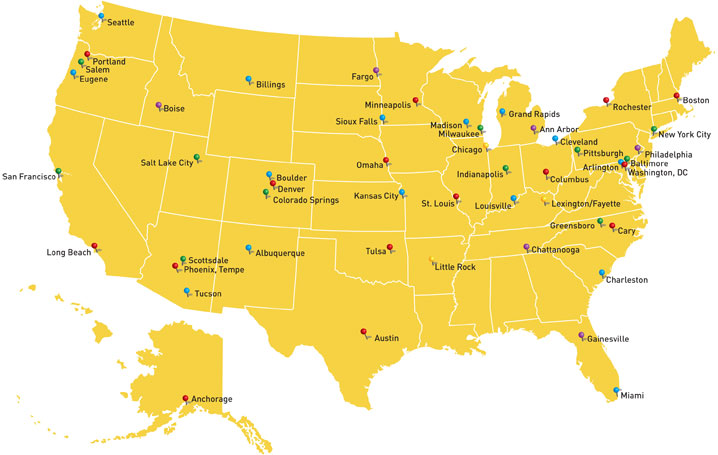 Bicycling magazine has released its list of top 50 most bike-friendly cities.

I am required, by unwritten journalistic law, to note that lists like this one are arbitrary; elements of their criteria are subjective, and Bicycling doesn’t have the resources to truly and objectively evaluate the bike-ability of every city in the United States.

The point of such lists is to highlight what is working; a good list includes many different kinds of cities–hilly, flat, car-centric, transit-heavy, etc.–and reveals what successful steps they have taken so that bicyclists can safely get from point A to point B. For example, Boston comes in at no. 26, basically getting an A for effort:

Boston was one of the worst cities for cycling for years. Now, former Olympic cyclist Nicole Freedman serves as its bike coordinator. In the last few years, the city has come along impressively, adding bike lanes and racks, and promoting educational programs.

OK, fair enough. I’ve lived and biked in Boston, as well as three other cities on the list: San Francisco (no. 6); Gainesville, Florida (no. 16); and Miami (no. 44), another former "worst city" that made the list because of the recent strides it has made.

Take my word for it, those are four very different places; and oddly enough–because I tend to quarrel with lists like this one–I would put them in the same order Bicycling did, with San Francisco first and Miami last.

In some ways, there’s no comparing San Francisco and Miami. San Francisco is compact, hilly, chilly, and politically liberal; Miami is sprawling, flat, hotter than hell, and relatively conservative. San Francisco offers many options for public transit; in Miami, you need a car to get around.

Back in November, I discussed a report that named four Florida cities, including Miami, as the most dangerous cities for pedestrians (and bikers) in the country. John Classe, a Florida engineer and builder, told me that, "Not many people walk to work in Florida. One big reason is that it is hot for a long period of time… Plus, there is not much residential within walking distance of employment."

Which is why Miami is the more interesting case. In some ways, it’s most valid to compare Miami to another large city with difficult weather: Minneapolis, which came in no. 1 on Bicycling’s list.

Minneapolis is cold and icy during the winter, which can be even more off-putting to cyclists than Miami’s sunny and humid climate. And yet Minneapolis has taken steps to mitigate the effects of weather, by adding "120 miles of on- and off-street bicycle facilities, plus indoor bike parking and other cycling-friendly facilities."

So I have questions for you: What is working in your city to get people out of cars and onto bikes? Do you live in one of the cities on Bicycling’s list? If so, would you argue with its ranking?