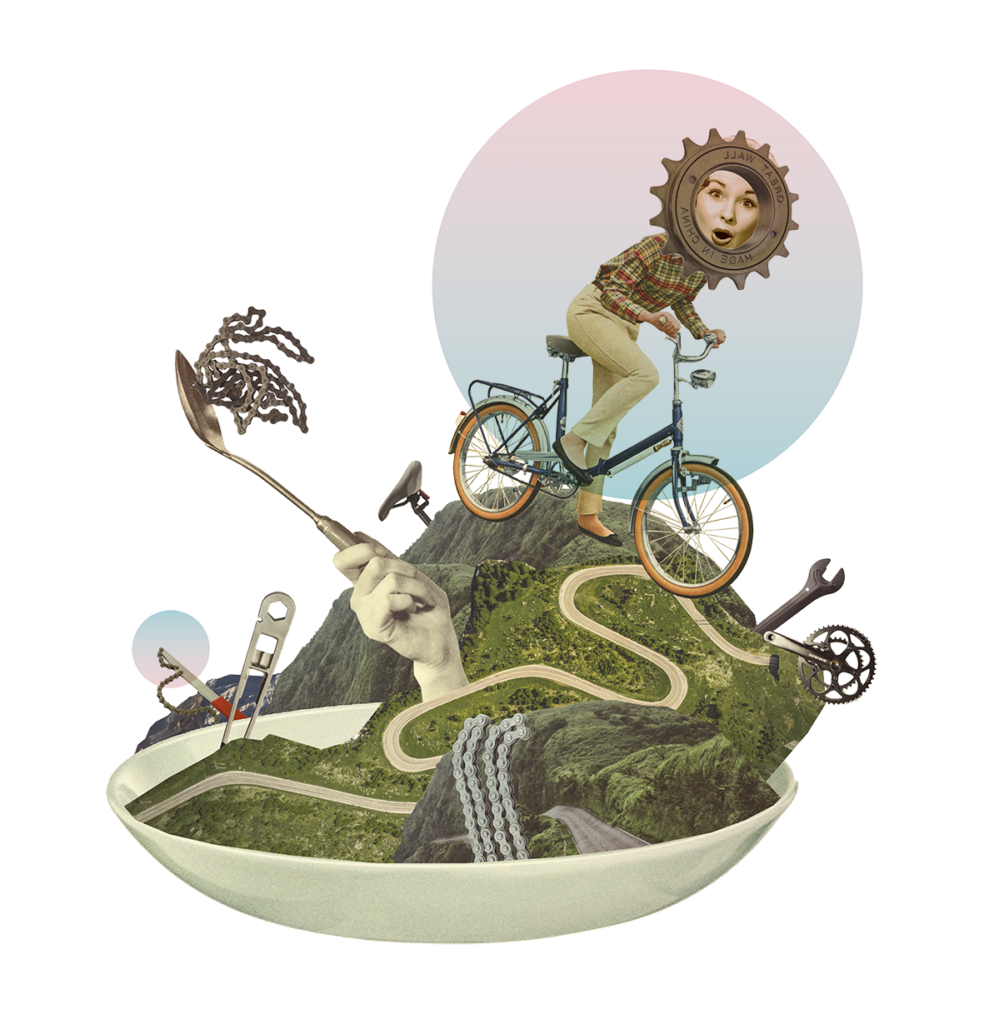 In 2011, a group of cycling enthusiasts in Bratislava, Slovakia, founded the Bike Kitchen, a cooperative self-help bike repair workshop where people come together to cook and organize events. From day one, the group’s aim has been to promote bike culture and to fight for cycling infrastructure in a city that is dominated by cars. In 2014, they developed a bike-sharing system, the White Bikes, which rents bikes for free through an open-source software they designed themselves. We talked to Tomas Peciar, one of the project initiators, about how bikes and food can act as connecting elements between communities.

Tomas describes it this way: “Our project started with three or four people. In the beginning, we were basically just doing flea markets with bicycles. We repaired old bikes and did one-day events with film screenings or concerts. During that period, we had a very small space. Then, through the participatory budget in Bratislava, we had the possibility to use some space in a building owned by the municipality. After we moved into this space, things became more formalized: we started to meet every Wednesday, to invite friends and to cook together, and to repair bicycles, of course.” As the co-op formalized, word began to spread and the initiative began to grow. It was spurred on in part by the large number of exchange students in the city.

“What really empowered us was the connection with the students in Bratislava. They wanted to move around by bike and didn’t want to spend money on public transportation. They were used to cycling, especially the Germans and people from other developed cycling countries. They came to us and we said, OK, we have some bikes, and we can repair your bikes, but you have to cook dinner for us. And so, in return for repairing or lending them bikes, they cooked really great specialties from all around the world for us.” The Bike Kitchen provided a way to connect community and mobility in a new way which felt very natural to the initiators. “For us, the connection between food and bicycles is very obvious, because the first thing you really need in this world is food and the second one is a bike, right? Food really connects communities – it’s inclusive – and so are bikes,” Tomas said.

For us, the connection between food and bicycles is very obvious, because the first thing you really need in this world is food and the second one is a bike, right? Food really connects communities – it’s inclusive – and so are bikes.

As interest began to grow, so did the Bike Kitchen. In 2014, the initiators started the White Bikes program, a cooperative bike sharing platform based around an open source software and a credit system. What started as a group of friends sharing 50 bikes around the city has now grown to more than 800 users. Over time, they have developed a nearly self-sustaining system. “When somebody wants to join the White Bikes, we have a face-to-face meeting and decide if it fits,” said Tomas. “We do 20 minutes of training with new users and we ask them what kind of support they can offer for improving the system, or for helping the cycling community or environmental community in Bratislava.” These users’ potential contributions are fed into a database of volunteers: “The database is categorized by the possible types of support. So, if we are organizing an event and need a graphic designer, we look at the list of graphic designers and illustrators and ask them who can help. If someone doesn’t know what kind of support he or she can offer us, it’s also fine. We always need people who can carry stuff or who have a driver’s license or who can bring food for breakfast on cycling days.”

Unlike many for-pay bike-sharing systems, the White Bikes are nearly self-sustaining, a result of design choices baked into the sharing system. “We have virtual credit: When you start to use the White Bikes, you get a credit of, let’s say, 20 points, and if you use the bike for more than one hour then you lose one point, so you have 19 credit points left. If the user doesn’t bring back the bike or locks it badly or whatever, we subtract extra credit points. When that person has zero credit points, he or she is not able to rent anymore. Of course, they get a notification before. It’s possible to earn new credit points by cleaning bikes or riding them back to where they are needed, for example. This makes the system almost self-sustainable, which is very rare,” Tomas said.

Cooperation has always played an important role in their project and is a central theme in everything they do. The members and volunteers cooperate to engage in advocacy for bike mobility and cyclist safety and to support events and keep the project going. Bike Kitchen Bratislava as a project is active in a range of initiatives and NGOs in Slovakia that focus on environmental or urban topics, in particular the largest national NGO on cycling, Cycling Coalition Bratislava. Cooperation also allowed them to start the White Bikes program because the bikes were a donation from the Dutch National Park through a local arm of the Rotary Club.

The project faces a range of challenges from limited-term leases on their space to a lack of strong support from the municipality. However, as Tomas points out, these challenges also serve to help bolster motivation among the project’s members. Despite these challenges, the Bike Kitchen has a significant impact both locally and nationally. Locally, they organize protests and events around cycling and discussions about transport and mobility during mayoral election years to help keep the topic current and visible. But they see their main impact on a national scale: “I would call our project the center of the cycling movement for all of Slovakia. This is the place where you find all the information and all the inspiration and all the motivation for pushing the cycling culture forward. So I think the impact is really, really big. Our initiative connects everything,” said Tomas.

In the end, Tomas attributes the Bike Kitchen’s success to its concentration on its core values, such as anti-racism and anti-homophobia. “Values hold a community together. We are always presenting ours to the outside so that everybody knows what kind of people we are. That connects us and at the same time keeps away those people who are not so into the community stuff. We never hide our values; they are always our top priority,” he concluded.

Values hold a community together. We never hide our values; they are always our top priority.

This article is part of our series on the Urban Commons Cookbook.

Dr. Mary Dellenbaugh-Losse is an urban researcher, consultant, and author focusing on the development of equitable, co-produced cities. Her work spans a diverse range of topics, including urban commons, cultural

Dr. Mary Dellenbaugh-Losse is an urban researcher, consultant, and author focusing on the development of equitable, co-produced cities. Her work spans a diverse range of topics, including urban commons, cultural and creative industries, intermediate and adaptive reuse of vacant buildings, participation of underrepresented groups, and the political, symbolic, and normative aspects of architecture and urban planning.