Are Cooperatives Better at Surviving a Crisis? - Shareable
Skip to content 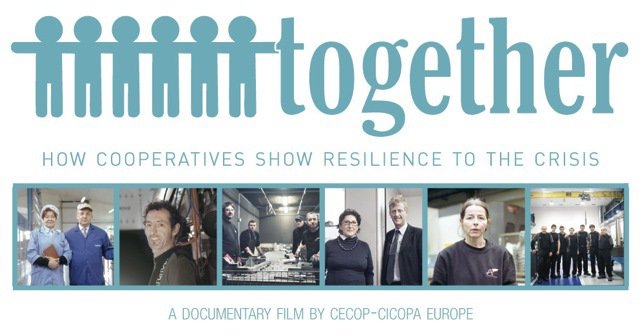 There is a growing body of evidence that worker-cooperatives are not only more just to the workers, but are more resilient in the face of economic crisis. A documentary by CECOP-CICOPA Europe (The European Confederation of Workers’ Cooperatives, Social Cooperatives and Social and Participative Enterprises—a real mouthful) called Together demonstrates the ways that four different cooperatives, in cities across Europe, are handling the crisis. I’ve embedded it below.

The documentary is unabashedly pro-cooperative, and it spends most of its running time speaking with higher-ups from the four cooperatives. Still, it’s much more informative than just a marketing video for the cooperative movement (though at times it leans that way). The four cooperatives it focuses on are Muszynianka, a mineral water cooperative in Poland; Fonderie de l’Aisne, a metal shop in Dormans, France that was taken over by workers after a crisis-driven liquidation in 2009; Consorzio SIS, a social services, health and employment integration in Milano, Italy; and Mondragon, perhaps the most famous coop in the world, whose 84,000 employees work in a variety of fields, and is based in the Basque region of Spain.

Together argues that co-ops, driven and owned as they are by the workers, don’t see liquidation or buy-outs as desirable reactions to the crisis, nor do they favor layoffs. Their democratic control allows them to respond more fluidly to the crisis. Fonderie de l’Aisne was, when it was a traditional factory, focused exclusively on car manufacturing, but that industry took a big hit—so the workers expanded horizontally into other fields that required metal work. Similarly, Mondragon took some big hits, and had 500 workers who would traditionally be laid-off, but who, in Mondragon’s case, just got transferred to other coops, protecting their jobs (if forcing them to relocate) without damaging the company.

Another point of interest, although it’s one that they only hint at in the film, is brought up during the Muszynianka segment. Under the soviet regime, of course, many factories were organized in a cooperative fashion, and as a Muszynianka worker points out, much of that infrastructure and solidarity was destroyed during the collapse of the Soviet Union and the invasion thereof by big western capital and the rise of the Russian oligarchs. I would love to learn more about the history of worker ownership and organization in the transition out of the USSR.

All this information is unfortunately put over a soundtrack which consists of only like two bars of music, which just repeat over and over again. This major technical flaw aside, Together provides rare insight into the state of the European cooperative movement, and cooperative’s capacity to survive economic crisis.