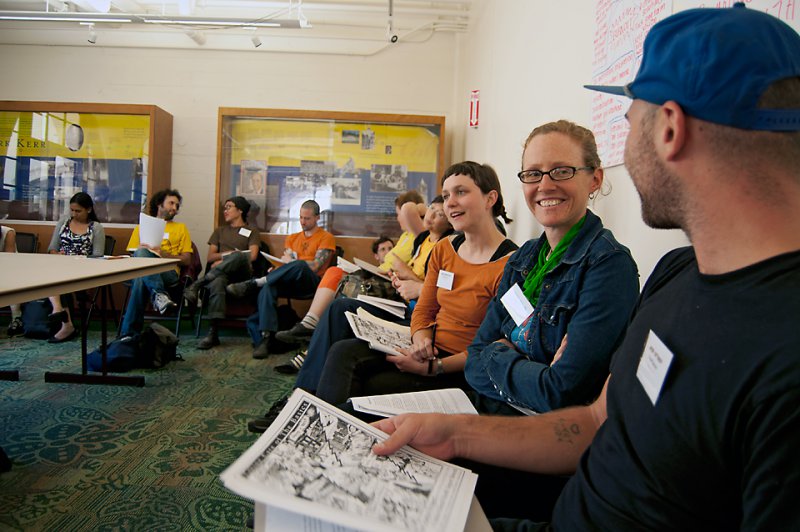 Worker-owned cooperatives are growing as an alternative business model that puts workers in control. And they are getting a lot more organized than in the recent past, turning local networks into regional and national organizations. With the Bay Area still grappling with high unemployment rates and a weak economy, co-op advocates say they have a solution that is gaining momentum. Membership in the United States Federation of Worker Cooperatives has grown 25 percent a year for the past two years, said Melissa Hoover, executive director of the San Francisco-based group, which recently hosted a national conference for co-op businesses in Berkeley.

Hoover sees the majority of growth in worker cooperatives developed to meet social, economic and community needs, and that the dire nature of the economy and  limited government intervention available to help distressed workers have left people looking for grassroots solutions. Whereas the co-op movement of the 1960s and 1970s had a more utopian, separatist bent,  increasingly what she sees are workers excited about cooperatives as a way to be a part of the economy on their own terms. “People are really open to new ideas,” Hoover said, “and they’re looking for hope,” Hoover said.

Though this represents a tiny fraction of the Bay Area economy, some national organizations have produced numbers that demonstrate growth. The largest 100 cooperative businesses in the country earned $209 billion in 2008, an increase of 157 percent from 1991, according to a report from NCB, formerly National Cooperative Bank. The bank noted that cooperatives have diverted much of that profit to their communities, raising millions for charitable works such as fighting hunger and building homes in New Orleans.

While cooperatives represent a sliver of the economic pie, they have drawn increasing interest. The United Nations has declared 2012 the International Year of Cooperatives; Michael Moore made co-ops the heroes of his 2009 film, “Capitalism: A Love Story”; and Naomi Klein produced a documentary in 2004, “The Take,” about spontaneously formed factory cooperatives in financially chaotic Argentina.

“There are some huge gaps that capitalism has created and that the government has let get larger,” Hoover said. “Cooperatives can meet a lot of those needs.”

In Hoover's estimation, cooperatives have weathered the economic downturn better than conventional businesses because they tend to provide essential goods and services, such as groceries, bikes, books or house cleaning. Also, they are inclined to be more conservative with their money and borrow infrequently. Borrowing to finance expansion, mergers and acquisitions caused many corporate businesses to fail in the late 2000s.

A number of Bay Area businesses have shown staying power in sustaining an alternative economic model that involves traditionally poor, disenfranchised workers. Worker-owners from across the country convened in July at the U.C. Berkeley Clark Kerr Campus for the third National Worker Cooperative Conference, bringing together co-op advocates eager to talk about social and economic justice and present big plans for the future of the movement.

The aim of the conference was to address weaknesses in existing cooperatives and to teach workers how to start their own businesses. Veterans of older cooperatives combined with younger members to impart decades of experience. The cooperative model was appealing increasingly to new demographic groups, Hoover said, “Over 25 percent of the attendees here are Spanish-speaking primarily, and coming from social justice organizations.”

John Curl is a historian of cooperatives and communalism, and author of “Memories of Drop City” and “For All the People: Uncovering the Hidden History of Cooperation, Cooperative Movements, and Communalism in America.” He said workplace activism has become more important in the co-op movement:  “Nonprofit organizations which have a social justice mission have been turning more and more to funding and promoting and organizing worker cooperatives.”

Curl, who is as a woodworker and a member of the Heartwood Cooperative Woodshop in Berkeley, cited two nonprofit groups started in the last three years as incubators designed to combat high local rates of unemployment and poverty: the Green Worker Co-ops in the South Bronx and the Evergreen Cooperatives in Cleveland.

La Colectiva has launched an ambitious media campaign telling the stories of historically undervalued and underpaid workers who are often exposed to toxic chemicals (among other occupational hazards) and not given access to safety training or medical care. Some 81 percent of domestic laborers do not make enough money to meet basic family living expenses, even though more than half are primary earners, according to a 2002 study of immigrant women produced by Mujeres Unidas Activas and the San Francisco Day Labor Program Women’s Collective of La Raza Centro Legal. A slew of billboards, leaflets, bus ads, radio interviews and marches have all served to herald the cleaners as professionals deserving respect.

Natural Home Cleaning members have on average doubled their earnings, increasing their family incomes by 72 percent, according to a WAGES study comparing members’ 2009 income with their earnings prior to joining. Home Green Home, launched in 2009 at the depths of the recession, had sales 30 percent higher than any other previous WAGES startup.

The conversation at the Berkeley conference diverged significantly from the movement’s utopian origins. Much of the discussion surrounded the tough work of surviving under the pressures of an economic model often ignored by financial institutions. One workshop focused on addressing burnout, another on how to talk to a lender. Others covered large-group conflict resolution, how to read a balance sheet and preventing oppression within the workplace. Similar to many nonprofit organizations, co-op members tend to work longer hours and be highly invested in their work. Despite the displays of optimism, some participants struggled to express the mental overload they were experiencing on the job.

Unlike other worker-owned cooperative advocates, Dan Thomases of Box Dog Bikes and the Bay Area network said co-ops are far from reaching the mainstream. He pointed out that many co-op businesses are by nature self-limiting, especially in a weak economy.

Hilary Abell of WAGES sees it as a sign of strength that, rather than growing larger, many cooperatives are more likely to start a new business, thus creating more jobs and spreading the wealth among the community.

“I think that being a worker cooperative we’re trying to think a little bit more clearheadedly about how we grow and if we grow,” Thomases said. “Are we really serving the communities? And does that mean growing or does that mean providing human needs at a rate that’s more sustainable?”

Thanks to SF Public Press, where this article originally appeared

Mineko is interested in issues relating to social justice, underserved populations and local grassroots movements. She has a B.A. from UC Berkeley in English and Anthropology, and currently studies journalism,

Mineko is interested in issues relating to social justice, underserved populations and local grassroots movements. She has a B.A. from UC Berkeley in English and Anthropology, and currently studies journalism, photo and video at the City College of San Francisco.