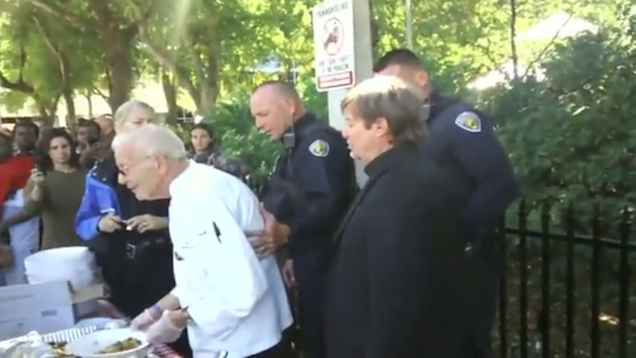 Last Sunday In Fort Lauderdale, Florida, a 90-year-old homeless advocate and two priests were arrested for feedling the homeless in Stranahan Park because their actions ran afoul of a new city ordinance that went into effect on October 31. The men face up to 60 days in jail and a $500 fine.

The law limits permissable feeding areas, requires the propery owner's permission, and forces groups to provide portable toilets. Cited for willfully violating this city ordinance and served with notices to appear in court, Arnold Abbott, head of Love Thy Neighbor, along with the Rev. Mark Sims from St. Mary Magdalene Episcopal Church in Coral Springs and the Rev. Dwayne Black of Fort Lauderdale's Sanctuary Church, had just begun serving a few of the 300 meals they had prepared when police approached.

Abbott, who has been feeding Fort Lauderdale's homeless for 20 years, took his story to Facebook on Monday:

As contemplated on Sunday, I was arrested for feeding the homeless and received a citation to appear in court. However, only 4 people were fed before an officer told me to, "Drop that plate immediately!" As though it were a weapon I was holding, and to go with him to the police car. After a time I was allowed to get the food back on the van and we were able to find a small churches driveway, where we set up, and fed the people who followed us over.

On Wednesday at 5:30 we will feed on the beach. When confronted by the police, which I expect will happen, I will present them with a copy of the court order of 1999 which allowed us to feed on the beach, without interference from the city.

It is my hope that they will honor that agreement but it is possible that they won't, alluding to the new agreement which scrapped the old one, and I could be arrested again.

This is an ongoing issue in the Sunshine State. Back in 2011, more than 20 activists from Food Not Bombs were arrested in Orlando, Florida, under a similar statute. And, as he noted, this was not Abbott's first run-in with the law, either. Back in 1999, he was arrested for feeding the homeless on a Fort Lauderdale beach, but challenged the city in court… and won. He plans to sue again: "I’m going to have to go to court again and sue the city of Fort Lauderdale — a beautiful city," Abbott told KHON. "These are the poorest of the poor, they have nothing, they don't have a roof over their heads. How do you turn them away?"