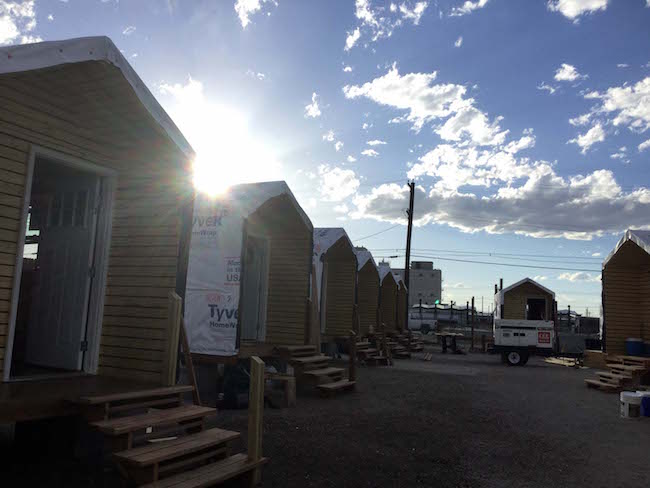 This month, fourteen Denver residents will be moving into their newly-built tiny homes as members of the Beloved Community Village. They will move into their new houses after approximately four years of hard work, from advocates for the homeless population of Denver. The Beloved Community Village consists of 11 tiny homes, with each two-person unit measuring just 8-foot-by-12-foot. Also on site is a community space, shared shower facilities, and shared restrooms.

This village will house people who otherwise wouldn't be safe or even allowed in a shelter. Many members of the homeless community find they "have no other option than sleeping on the streets," Benjamin Dunning, co-founder of Denver Homeless Out Loud, says. Couples are not allowed to stay at shelters together, and pets are not allowed either. Further, most homeless shelters split men and women up, leaving no clear, safe place for transgender individuals.

Residents for the village were chosen in two different stages — in April 2017, the Colorado Village Collaborative told members of the homeless community about the project and invited them to apply for a space. Dunning says the organization received around 30 applications out of which six were selected. These six future residents formed the Village Council and were tasked with the decision-making process. Giving residents the power to self-govern the village is one of the key aspects of the pilot program. "This will not be a shelter provider situation where people tell people how to lead their lives," Terese Howard, a member of Denver Homeless Out Loud, told the Denver Post. "They will be independent." 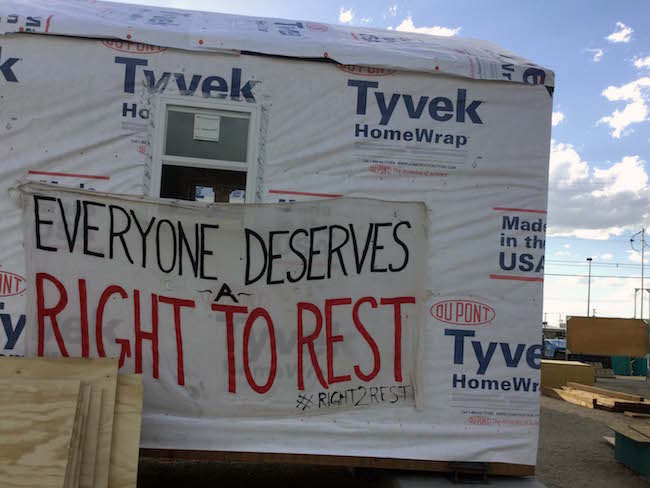 The process to get to the completed village wasn't an easy one. Not only did the team at the Colorado Village Collaborative need to find funding for the village, they also needed to find available land and work with the city to get approval for zoning permits. Building the homes was the last step in a long and complicated process.

Located in Denver's eclectic and innovative River North Art district and only steps away from a light rail stop, the village is currently in an ideal location. In an interview with Unicorn Riot Future, incoming resident Jamiah Rawls stated that the most intriguing part of living in the village is "having my own space and [living in] a multicultural neighborhood. I didn't want to live in a segregated neighborhood, I wanted to live somewhere where there's diversity."

The village's prime location is not permanent. The Beloved Community Village is only a pilot program that will last for 180 days. After six months, the homes will need to be moved from the current spot.

"The homes are built on land [owned by the Urban Land Conservancy] that is slated for a different project," Dunning says. When asked about the village's next location, Dunning says that "we have a few different options but nothing has been decided yet." And as to whether or not the next location will also be temporary, he says that this is also up in the air. According to Dunning, the city has initially approved a six-month zoning permit. The hope is that the pilot program will prove successful and the zoning permits will become permanent.

Over the past few years, the city of Denver seems to have lost its way with the issue of homelessness, criminalizing the homeless population when they camp out in public spaces. The city has enacted "sweeps" of areas heavily used by homeless people. Police officers force anyone sleeping outside to move, while taking their property. This has prompted a class action lawsuit against the city for constitutional rights violations.

In order to help solve the problem of increased homelessness in Denver, the Alternative Solutions Advocacy Project was formed and the team quickly formed a subcommittee called the Colorado Village Collaborative. The group consists of many Denver homeless advocacy groups such as Denver Homeless Out Loud, the Interfaith Alliance of Colorado, Beloved Community Mennonite Church, among others according to Denver Homeless Out Loud.

While tiny house villages may be a wonderful way to house the homeless population, they are not a long-term solution. The cost of the building the village is $140,000 — with each home costing $7,500. With 5,500 people in need of homes, almost 370 villages would need to be built to provide a home for everyone at a cost of over $52 million.

This project may come with some difficulties and unexpected delays but overall, it is a significant step forward for the homeless community in Denver. In fact, plans for the second village are already underway.

All photos of Beloved Community Village by Courtney Pankrat