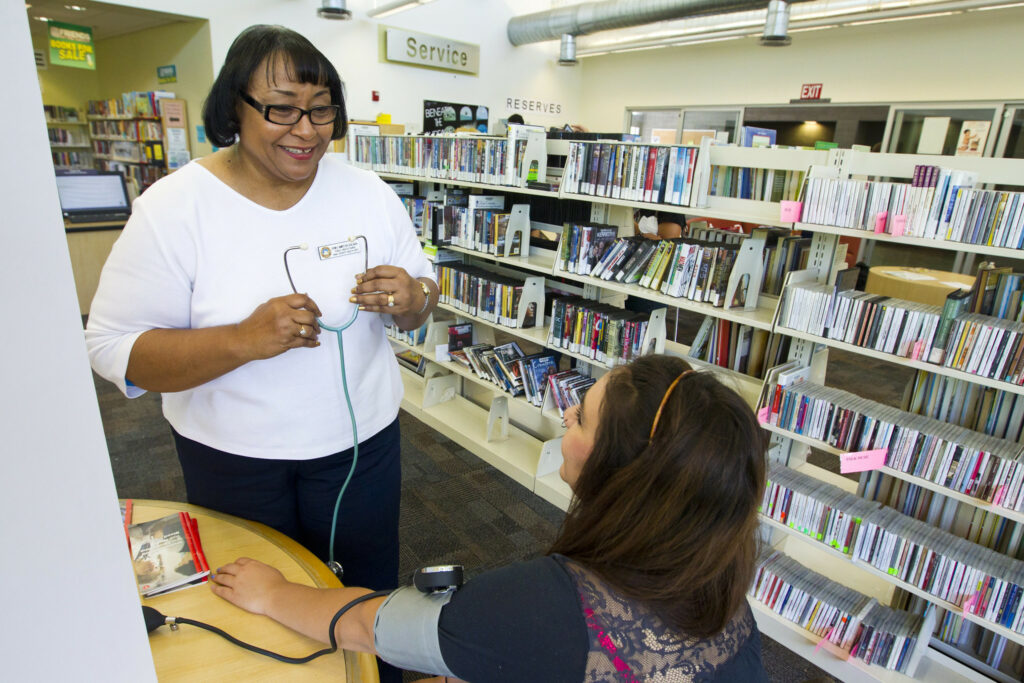 When you walk into your local public library, you expect to receive help from a reference librarian, a circulation desk librarian, or perhaps a children’s librarian, depending on your needs.

However, many libraries are starting to employ people in new, non-librarian roles to better meet the changing needs of the communities they serve. The below nine cutting-edge jobs within libraries showcase the evolving role of this uniquely flexible public institution, an institution whose value as social infrastructure only seems to grow as crisis after crisis rocks society.

In Arizona, the Pima County Public Library has forged a partnership with the Pima County Health Department in which a team of public health nurses provides services to library patrons from Tucson and the surrounding area. One nurse works full-time in the library, and they’re all dedicated to ensuring the physical and mental well-being of patrons. These nurses educate patrons on nutrition, perform blood pressure screenings, engage in case management, and refer patrons to outside services if needed.

Many unhoused individuals rely on libraries for a safe place to stay during the day, a computer to use for job hunting or email, and a sense of community. Libraries recognize this growing cohort of library patrons and are responding to their needs. In Dallas, Texas, a full-time homeless coordinator works at the Dallas Public Library’s Central Library. In San Francisco, a full-time psychiatric social worker coordinates services for the homeless. And in both Tucson and Dallas, library patrons with a personal connection to the cause are also taking up the torch to help those currently experiencing homelessness. The San Francisco library employs a team of formerly homeless patrons as health and safety associates, known as HASAs. These staff members seek out those in need of help and connect with them on a personal level. And in Tucson, a team of unhoused individuals volunteer at the help desk and help run the homeless engagement programs.

When you think of libraries, you don’t usually think of food; after all, eating is typically forbidden in libraries! In North Carolina, however, the High Point Public Library is the site of the local farmers market, which runs from April to October. During those months, the High Point Farmers Market is open every Saturday from 8:30 a.m. to 1 p.m. and features healthy, fresh produce, herbs, and even crafts from local vendors.

Lee Gann, a city contractor, is the farmers market manager at the library. The grandson of tenant farmers, he was involved in farming until age 17, when he went off to college. Upon graduation, he worked in corporate America for 20 years until the Great Recession of 2008 led his company to downsize. That’s when he decided to return to his roots. He works land owned by his uncle and sells cucumbers, watermelon, cantaloupe, and corn. His farm is just one of five farms and eighteen stalls represented at the market, which accepts government food payouts to help reduce food insecurity among low-income individuals and improve access to healthy, local food to curb the obesity crisis.

Gann is also involved in other initiatives and serves on the board of Growing High Point, which helps residents working in urban gardens to sell their produce at the library. Gann says the city has been a strong supporter of the library and the farmers market. “We do the best we can to improve High Point,” he says, including services like blood pressure screenings, which have also been performed inside the building. According to Library Director Mary Sizemore, who is heavily involved in the farmers market and is there most Saturdays: “Everything that we do in the farmers market was just the same thing that we were doing inside the building. We’re just taking it outside.”

In Canada, the Calgary Public Library has made great strides in honoring the Indigenous communities within the Treaty 7 area of southern Alberta. At the heart of this initiative is the idea of Indigenous placemaking. Livia Manywounds, a former reporter for the CBC, recently became the library’s program coordinator for Indigenous placemaking. According to Manywounds: “Through Indigenous placemaking, the Library welcomes Indigenous artists from or connected to the diverse nations and communities within Treaty 7 territory to create permanent artwork installations for Library locations. The creation of these works inspires collaboration among artists of all disciplines, backgrounds, and experience levels.”

Starting in 2017, with a goal of “making Indigenous visual and oral storytelling more prominent in Library locations,” the library and the members of the Indigenous Place Making Council of Canada received input from Stoney Nation, Siksika Nation, Tsuu’tina Nation, Métis Nation of Alberta, and the Aboriginal Friendship Center of Calgary. Three branches of the Calgary library system now feature art by Indigenous artists.

At the Long Branch Free Public Library in New Jersey, David Perez is the only full-time, library-based social worker in the state, according to NPR. Library social workers teach technology courses, help job seekers find employment, connect patrons to mental health and legal services, and refer homeless patrons to local social services. (Patrons in need often feel more comfortable asking for help from library-based social workers, because there is no stigma attached to entering a library.) The role of social workers in libraries continues to evolve. For example, the Long Beach Free Public Library even carries two doses of Narcan to treat opioid overdoses in an emergency.  As community needs shift, many libraries are striving to meet patrons where they are.

Libraries have long prioritized children’s programming, from story hour to summer reading initiatives to personalized book recommendations. However, there are only 50 librarians nationwide who specifically work at state libraries on statewide initiatives to support children. Beth Crist, youth & family services consultant at the Colorado State Library, is one of them.

“The Colorado State Library is the third state library I’ve worked for, actually, and it’s a niche I really enjoy. The position requires a lot of project management, training, and collaboration,” says Crist. “I have the wonderful opportunity to work with library staff from all the public and military libraries across Colorado that work with kids and teens, and I’m constantly inspired by their dedication to kids, their communities, and the highest level of customer service; their creativity and resourcefulness; their enthusiasm for sharing with their colleagues; and their true passion for kids and librarianship.”

Crist is particularly proud of two initiatives. The first is Check Out Colorado State Parks. Crist explains: “With our amazing partner Colorado Parks and Wildlife, another state agency, we provide state park passes and nature backpacks with binoculars, four field guides, a Leave No Trace outdoor ethics card, a fishing basics guide, and a state park brochure to libraries statewide.” Each participating library can circulate these materials to their patrons for a week at a time.

Another initiative, Colorado Libraries for Early Literacy, supports local librarians serving children 6 years old and younger. The program includes recorded songs and rhymes appropriate for early childhood pre-literacy development and are available in 10 languages. “I enjoy the state-level perspective of this role,” Crist says, “and really getting to know the libraries across the state and engaging with their staff.”

The Tampa Bay area is home to nearly 350,000 deaf or hard of hearing individuals—the largest such community in Florida, according to the Florida Association of the Deaf. To better serve this population, the Pinellas Public Library Cooperative houses the Deaf Literacy Center.

The program first began as an initiative in the city of Safety Harbor and eventually spread to the rest of Pinellas County. Why is the Deaf Literacy Center important? A history of language deprivation means that deaf individuals often have lower reading levels than hearing peers. To address this, Deaf Literacy Coordinator Rosa Rodriguez and a team of four staff members coordinate programming, which includes American Sign Language classes, an Optimist Club, a deaf-art workshops, a deaf summer camp, and a “Deaf Battle of the Books,” according to Deaf Literacy Center Program Assistant Jessica Rottloff.

The Deaf Literacy Center provides services so that deaf patrons can not only access the library’s offerings, but can also thrive within the library setting.

At the Kansas City Public Library, Amanda Landayan, the Library’s health and wellness librarian, is dedicated to helping patrons reach their health and wellness goals, according to Northeast News. The Northeast Branch of the library offers a variety of fitness classes, from cardio kickboxing to tai chi, all facilitated by a personal fitness trainer. In Nashville, the Be Well at NPL initiative, coordinated by Elizabeth Roth, is also focused on library patrons’ physical health. At the Roseland Free Public Library in New Jersey, Sandra Michelson, the cataloguing specialist, is also a certified mindfulness instructor and has a second role as the library’s health and wellness coordinator. While the library has long been a place to exercise your mind, these jobs prove that libraries are expanding their role to include physical exercise and mental health too.

What is driving this new trend among libraries? According to Noah Lenstra, assistant professor of library and Information science at the University of North Carolina Greensboro, “the trend driving this movement is the turn of public libraries towards community-centered needs.” The next time you walk into your local library, don’t be surprised by the wide variety of staff working there.