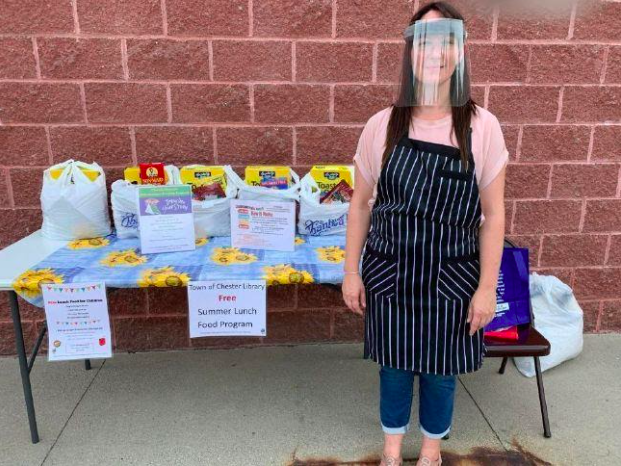 Across America, in major cities you’ve heard of and in countless places you most likely have never considered, public librarians are working with local, state, and national partners to bring food to those who need it during the COVID-19 Pandemic.

Yes indeed. And, when librarians distribute food, they do more than merely give it away.

They also use the library’s myriad educational and lifelong learning resources to confront the food insecurity that all too many Americans struggle with every day.

This library was ready

In fact, libraries have a long history of food provision, from the victory gardens of World War I and II to today’s bumper crop of community gardens at libraries across North America.

But the story runs deeper still.

In rural Wilkes County, North Carolina, in the foothills of the Appalachian Mountains, food insecurity is so bad that, as of 2015, only about 16 percent of children who are eligible for free summer meals actually received them.

They started out with plans to give away just 45 meals to local kids, but the program was so popular that it quickly became the largest summer food distribution site in the entire county.

The library supplemented the meals it received from a local school district with meals prepared by local businesses, who were encouraged to utilize fresh produce donated by local farmers.

In subsequent years the program expanded. The library not only distributes free meals and snacks, but also Market Bucks, provided by the county health department, which families can redeem for free food at the local farmer’s market.

So when COVID-19 hit, the Wilkes County Library was ready.

The library’s youth services manager Elizabeth Lee told me that among the first things she did, when the statewide stay-at-home order went into effect in late March, was create a list of places in Wilkes County where people could go for free food.

She kept that list up-to-date and made sure it was pinned to the top of the library’s social media, so that it was among the first things patrons saw when they engaged the library online.

The library’s usual summer feeding program was cancelled due to the pandemic, but they kept distributing Market Bucks as part of its curbside summer-reading program. All told, Lee said, about 70 families picked up Market Bucks from the library in summer 2020.

Since 2008, the number of public libraries in the United States feeding children and families during the summer months has skyrocketed. Innovative programs are flourishing from coast to coast.

As these initiatives proliferate, funders, scholars, and policy makers take note. California’s Lunch at the Library inspired a series of peer-reviewed studies in the journal Public Health Nutrition, and received $1 million in supplementary funding from Governor Gavin Newsom in 2019 to expand the program.

My research showed that in 2017, at least 1,546 public libraries distributed summer meals as part of the U.S. Department of Agriculture’s Summer Feeding Program. Two years later, in 2019, data from the agency’s Food and Nutrition Service show that by 2019 the number of libraries serving summer meals had grown to above 2,000.

Over the last three years, the Denver Public Library has worked with service groups and the local school district to provide summer meals at library branches in communities that are food deserts, or which are dealing with safety issues.

In 2020 alone, with whole households disrupted by COVID-19, Denver’s library system has served 5,000 breakfast and lunch meals to both youth and their parents or guardians.

Many of these summer feeding efforts at libraries are morphing into year-round food distribution programs.

In Cleveland, Julie Boxler of the Cuyahoga County Public Library is part of a statewide advocacy network, organized by Children’s Defense Fund Ohio, in which library branches with summer food programs are now working with local food banks to offer services such as year-round produce distribution.

Elsewhere, Shane Hoffman of Ohio’s Plain City Public Library has helped organize Team Vittles, a librarian-led collective that advocates for libraries to support food distribution during the pandemic, and beyond.

In California, the California Library Association received a grant from the California Department of Social Services to help libraries promote “early learning, nutrition and food access for young children.”

Patrice Chamberlain of the California Library Association said that food programs at libraries serve an additional, and critical, role in connecting young children with a wider array of services.

“Library early-childhood programs are a great opportunity to partner with local health departments, master gardeners, etc.,” she said in an email, “to promote nutrition, physical activity, and encourage healthy habits.”

She said that these programs even help young children try new food.

Bigger picture, Chamberlain said, promoting nutrition and literacy together can open the door for better partnerships between libraries and community health services of all sorts.

This includes a “building healthy habits” program she’s developing with support from the USDA to create bilingual English-Spanish activity kits for kids and their caregivers. The kits integrate nutrition, physical activity, gardening — and sometimes even include a book to read.

A critical factor, she said, is that libraries are not doing this work alone. Instead, they’re sharing resources to strengthen the work of multiple organizations locally, statewide, and at the federal level.

In High Point, North Carolina, the library is the official host and sponsor of the city’s Farmers Market. When the pandemic first swept into the state, one of the first things the library did was work with vendors and the city to figure out how to safely open the market.

Library staff also did outreach to ensure that low-income residents know they can use USDA supplemental nutrition  benefits at the market.

The need these libraries are serving seems bottomless, and all across the country, they’re meeting the challenge with grassroots innovation.

In Ohio, the Brown County Public Library offered meals with a grab-and-go-option at all four of its branches.

The Grafton-Midview Public Library worked with the local Boys and Girls Club to offer free summer lunches — 634 total, in fact.

“Under normal circumstances,” Grafton library staffer Kari Mariner wrote in an email, “we serve hot lunches five days a week and follow the lunches with an activity or small program.”

The Perry Cook Memorial Public Library in Mt. Gilead, Ohio, serves as both a pickup site for weekly meals, and as well as a distribution point for “super snacks” provided by the Children’s Hunger Alliance.

In Paducah, Kentucky, the school district’s mobile meals van set up shop in the library’s parking lot. The library there also hosts a Little Free Pantry, one of many libraries across the U.S. that do so (PDF).

In Pilot Mountain, North Carolina, population 1,500, the local free outdoors pantry is called the Blessing Box. It was installed with the help of a local Girl Scouts troop. Staff at the library report that every week the box is emptied and refilled by community members in need — and with food items to share.

In Bucyrus, Ohio, one children’s librarian said that the COVID closure saw them collaborating with the local food bank to pack food bags that were distributed along with free lunches. The library used a “grab-and-go” format instead of serving meals in the building’s community room; in June and July of this year that added up to more than 1,000 meals per month.

The library in McAllen, Texas, rolled its summer food program into a “free meal bundle” that provides breakfast and lunch, plus a snack, for grade school students for the Fall 2020 school year.

The Globe, Arizona, public library started its summer meal program early, in March 2020, right at the start of the pandemic. According to library director Adria Ricke, the library was asked on March 15 to act as a food serving site amid COVID-19 school closures: “We jumped at the opportunity and began serving food by March 17.”

In Woodstock, Illinois, in early February, the library “started a small food pantry,” and when the pandemic hit, staffers moved the pantry outdoors.

This includes offering access to coolers stocked with fresh food gleaned from local farms; giving away free produce monthly during the farmers market; teaming up with local food banks and hosting food trucks; receiving grants to provide grab and go lunches; and lining up carts full of free produce.

In California, Coaching Corps and the California Library Association teamed up to redistribute produce boxes from the USDA’s Farmers to Families program, which, before the pandemic, would have been purchased by  restaurants and hotels. Instead, Coaching Corps diverted its volunteers to bring this extra produce in the national food system to the library and other locations. Over six weeks, according to the Library Association’s Patrice Chamberlain, libraries statewide distributed more than 100,000 pounds of produce to community members.

Participating libraries in California were also able to boost summer meal programs, promote their resources, and distribute books to kids.

The library in Eugene, Oregon, also handed out books at summer meal sites.

One of the most touching stories about food distribution by librarians during COVID-19 comes out of the Erie City Public Library in Neosho County, Kansas.

In a late July posting emailed to her peers in the Association for Rural and Small Libraries, library director Julie Kent described a seed-sharing program that, five months into the pandemic, has gone from a few tomato plants at the shuttered library building to a community-wide home gardening movement.

In addition to tomato-plant seedlings, she wrote, ”we passed out bags of seeds, onions, and potatoes to families,” and on one day alone handed out 100 plants with planting instructions to about 35 families.

By summer, she wrote, participating families began bringing in produce they grew at home, including  nectarines, red Anjou pears, green peppers, corn and squash, “for anyone to pick up.”

Public libraries are idiosyncratically local institutions, and each food-sharing program grew up from the grassroots, with support from local partners. While some draw support from federal and state governments, others don’t.

If you want to start a similar program where you live, the first step is to reach out to your local librarian.

Then let Shareable know what you develop together!

Dr. Noah Lenstra launched Let's Move in Libraries in 2016 at the University of North Carolina at Greensboro's School of Education, where he is an assistant professor of

Dr. Noah Lenstra launched Let's Move in Libraries in 2016 at the University of North Carolina at Greensboro's School of Education, where he is an assistant professor of library and information science. He writes and researches on how public libraries weave themselves into their communities. He is currently working on an Institute of Museum & Library Services grant-funded project (LG-18-19-0015-19) that will answer the question "How do small and rural public libraries address health and wellness through public programs?" Learn more at NoahLenstra.com