Libraries on the Front Lines of the Homelessness Crisis in the U.S. - Shareable
Skip to content 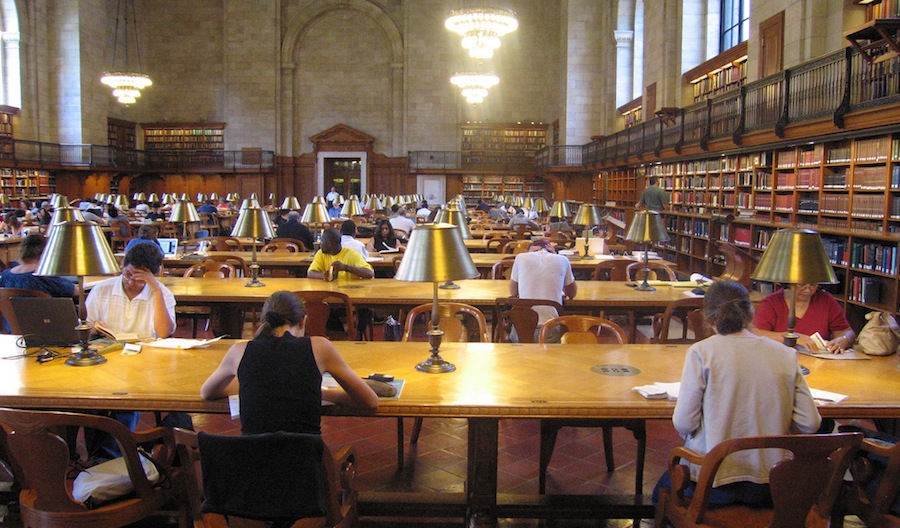 Libraries are increasingly a sanctuary for people who are homeless or mentally ill. We wondered how libraries function on the front lines of social service provision.

Prevalence of homelessness in the United States

On any given night in 2014, over half a million people in the United States found themselves without a home. While the majority of these people (69%) secured shelter for the night, many shelters do not provide daytime accommodations for their patrons. This leaves many in search of daytime activity and protection from the elements.

Unfortunately, many homeless are also living with debilitating mental illnesses. The intimate relationship between homelessness and mental illness is well-established. Almost all psychiatric conditions are overrepresented in homeless populations.

The transition from inpatient to outpatient psychiatric treatment that began in the 1960s, including the closure of state-run psychiatric hospitals, may contribute to the prevalence of mental illness among the homeless. Today, adjusting for changes in population size, US state mental hospitals house only about 10% the number of patients they once did.

So it is no surprise that libraries are coping with a large number of patrons who are homeless or have mental illnesses. Public libraries are, after all, designed to be welcoming spaces for all.

This can leave libraries struggling with how to serve a population with very diverse needs.

This is an issue we know that librarians at a metropolitan public library we visited are grappling with. We became aware of this issue in speaking informally with librarians who work there. To our surprise, we learned that the library serves a large number of homeless and mentally ill patrons.

The librarians told us about some of these patrons. There is Big Bob, a large man in his 40’s who frequently regales the librarians with accounts of his exploits as a member of special ops forces in the military. There is John, a reclusive man always attired in combat fatigues and heavy-duty army boots who turned out, in the bitterest cold of winter, to be suffering from severe frostbite. And there is Jane, a young woman who, when it emerged that she was temporarily living in her car, turned the tables on the librarians by saying, “Shh,” so no one else would learn of her plight.

Some of these library patrons are homeless. Others have been diagnosed with a mental illness, such as bipolar disorder, schizophrenia, depression, or substance dependence. Tragically, many are experiencing both.

They come to the library for all sorts of reasons: to seek warmth and shelter, to use the restroom, to access the internet, to meet friends, and yes, even to read books and newspapers. One librarian estimates that about half of the library’s regular patrons are either mentally ill or homeless.

The library’s long-term employees report that the mentally ill were not always such a prominent component of its clientele. Their presence increased dramatically 20 years ago, with the closure of a local mental hospital.

Helping homeless and mentally ill clients is a challenge that libraries all over the country are grappling with, but library science curricula don’t seem to have caught up.

According to one newly minted librarian who received her master’s degree in library science a few years ago, contemporary library education typically includes no coursework in mental illness. It focuses on the techniques and technology of library services, especially meeting the needs of patrons for access to information.

Learning strategies to assist mentally ill and homeless patrons might not be on library curricula, but the American Library Association has long had policies in place emphasizing equal access to library services for the poor, and in 1996 formed the Hunger, Homelessness, and Poverty Task Force.

Across the country, libraries have developed helpful strategies for serving homeless and mentally ill patrons. One, at least for large libraries with sufficient numbers of personnel, is to designate a member of the staff as a specialist in these matters, who serves as a resource person for other employees.

At the metropolitan library we visited, one of the more civically oriented librarians acts as a liaison between various local mental health agencies and homeless shelters. She has cultivated a relationship with a mental health crisis clinician at the county hospital, who has organized workshops to educate the library staff about mental health and substance abuse.

This librarian’s work with homeless and mentally ill library patrons is currently supported by the library’s budget, but much of her progress was driven by her personal commitment. As she looks toward retirement, she worries that these services will fade when she leaves.

However, there are signs that libraries are embracing their role as a safety net. Libraries in San Francisco, Washington DC and Philadelphia are hiring social workers to assist with the needs of homeless and mentally ill patrons. Others in Queens, New York and Denver, Colorado have outreach programs that bring training services to homeless shelters and educate residents about library services. The Denver program even provides the bus fare to visit the library.

The librarians we talked to take their role as surrogate mental health workers in stride, and many regard their mentally ill patrons with a sense of mission.

Said one librarian who has worked at the downtown library for more than 30 years:

The library often serves as a destination for people who have no place to go. They can always come here, to be warm, safe, and entertained. At first, I didn’t know how important the library is to them, but one day before a holiday, a patron came up to me and said, ‘You guys will really be missed tomorrow.’ Some may resent the presence of the mentally ill in the library, but as far as I am concerned, everyone deserves a chance to use it.

The Conversation is an independent platform for analysis and commentary written by scholars, edited by journalists, and aimed at the general public.

The Conversation is an independent platform for analysis and commentary written by scholars, edited by journalists, and aimed at the general public.