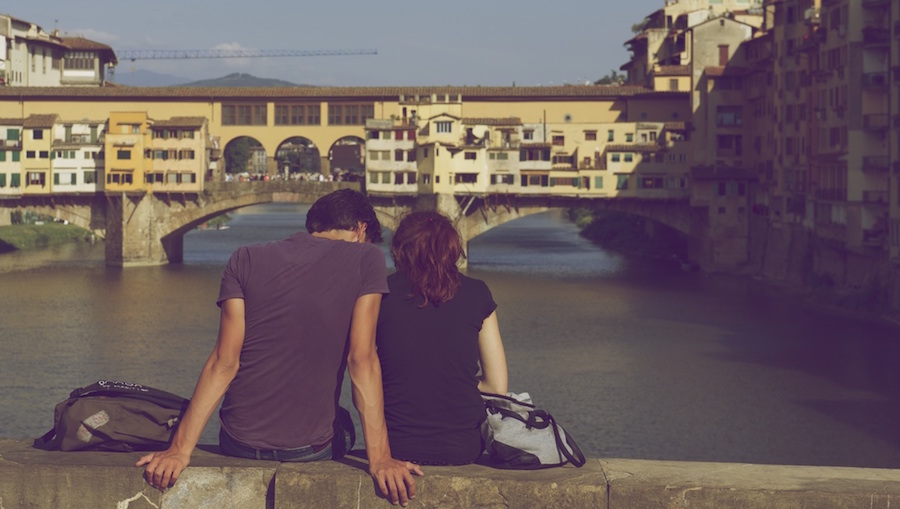 There is hope for "sharing monopoly" malcontents who have discovered that some peer-to-peer accommodation sites can be more like forced labor than a cultural awakening, regardless of whether it's for free or to earn some extra cash. The web is now flooded with horror stories about monoliths like Airbnb, with dedicated websites (like AirbnbHell) for sharing these tales.

Couchsurfing isn't without critics either, and just because it's free doesn't mean it doesn't cost you anything. On Airbnb, "regular hosts" must now improve their game in order to compete with a growing number of professional hosts, while increasingly demanding guests become more difficult to deal with, and all the while the company valuation keeps going up.

Below you will find a list of platforms that part ways with the mainstream consumerist tendencies that have subsumed the once innocuous accommodation networks. In addition, you will find alternatives that cater to travelers of different ages and even sexual orientations, though racial discrimination still plays an issue in the sharing economy, a challenge which hasn’t seen an effective response to date. A more critical analysis of the issue of race in the sharing economy is available here, where researchers have demonstrated the bias in hosting across ethnicities. One example shows how a host in Tunisia, after having numerous European guests at his home, could not find anyone to host him in Europe. People of other non-European nationalities echoed the similar experiences, leaving them disillusioned about the "New World" that technology is creating, which doesn't appear much different from the old one.

BeWelcome was was created in 2007 by some of the volunteers from one of the first online accommodation platforms, Hospitality Club (which is still in existence). It didn’t start to gain widespread popularity until Couchsurfing, its main competitor, changed from a non-profit to a for-profit entity. At that point many key community members started an exodus that temporarily crippled Couchsurfing’s reputation among many backpackers, sojourners, and vagabonds.

Now the BeWelcome community is just as reliable and widely used as Couchsurfing and it seems far less datey as well (one criticism of Couchsurfing is that people confuse it for a dating site). It shares the same ethos of offering a bed to travellers without money changing hands, but the BeWelcome organization is governed much like Wikipedia, so it’s more democratic and they don’t harvest your data like Couchsurfing does. In fact, everything BeWelcome does is open source. 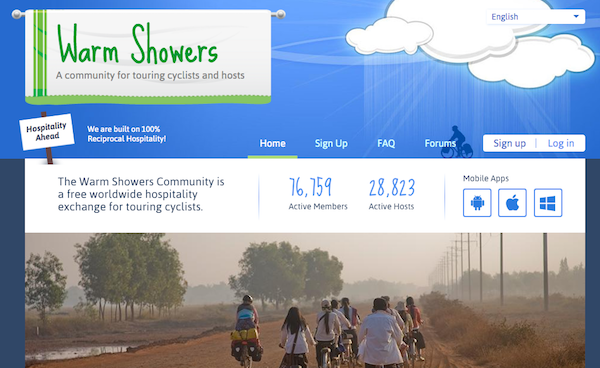 Much like BeWelcome, Warm Showers offers free accommodation, but members should arrive to their host’s place by bicycle. Warm Showers was created for cyclists that are on long distance journeys and need a place to stay (and wash themselves) along the way. The site also has a nifty app that you can download with a mapping feature to plan your route based on where you happen to find accommodation. Not only have I used this site while cycling across Europe, but it has also been used by other Shareable writers in the past. If you cycle through Athens, look me up. 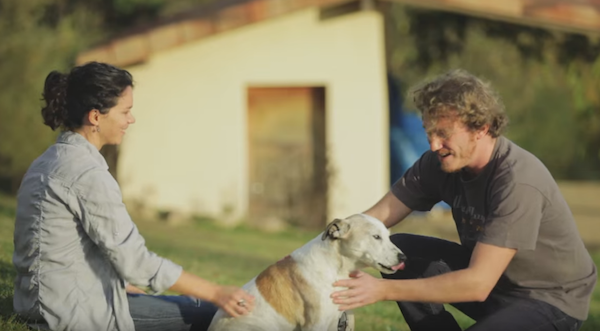 TrustedHousesitters has also been recommended by Shareable, and is for travelers who are partial to animals. There is a membership fee that you pay to the site, but the actual housesitting has no cost. I used this site to housesit on an organic farm on the island of Chios for a month while surrounded by nine cats, four dogs, and two kittens. It was almost more than I could handle, but it's not always like that. Mostly people ask you to look after their dog, horse, goose, or even a fish and in exchange you get to stay in some really nice houses or even in tropical locations; all you have to pay for is your own food (not the animal's). Another housesitting site worth mentioning is Normador, which has a similar structure.

Along the same lines, but with more labor involved, is WWOOFing, which has also been covered by Shareable in the past. WWOOFing hosts expect you to stay a minimum of two weeks but WWOOFers often stay for much longer periods. The exchange is that you do work on the farm, and you get a place to stay and, in most cases, food as well.

In my own WWOOFing experience I was given the task of erecting a massive fence on a corral alongside a Swiss cowboy who might have liked horses more than people. There are travellers that spend years WWOOFing, going from one farm to the next, and there is no shortage of farms to choose from, there is even WWOOFing in Africa. Also of note are the sites WorkAway, HOVOS, and HelpX. 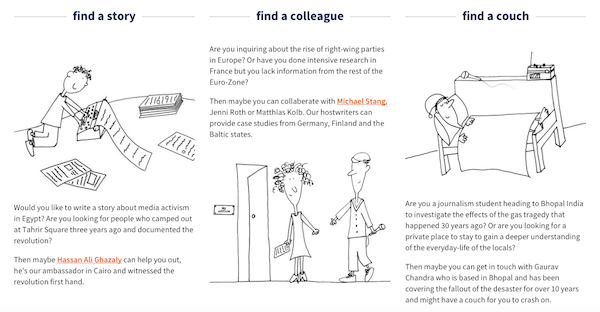 If you are a writer or journalist, there's a platform especially for you called Hostwriter. If you are covering a protest or going to collect interviews, you can often find a fellow journalist to host you in your location of choice. The site also actively encourages cross-border journalistic projects by offering prizes and rewards to writing teams that apply.

Teachers can find accommodation in exotic places using the platform TeachSurfing. There are many opportunities to choose from, almost anywhere in the world, and there are different needs that might surprise you. TeachSurfing really opens up the world of teaching beyond what you might think—there are requests for everything from choir teachers to IT trainers to sculpture. Often all the necessities are taken care of, just show up and teach.

Though not limited to hitchhikers, Trustroots is especially popular among them and has been recommended by Moneyless.org. Their brief manifesto (below) is simple, and sums up the ethos quite succinctly. You might also want to check out GFL, or the Global Freeloaders Network, which is also quite active. GFL has a great list of resources for independent travellers as well.

Trustroots Manifesto: We want a world that encourages trust, adventure and intercultural connections. Our willingness to help each other should not be monetized. Trustroots is completely free to use and will remain so forever. We believe in beauty, simplicity and transparency. We emphasize community.

Trampolinn has changed their format recently but the basic concept remains: you use a virtual currency (points) to pay for you accommodation. When you host someone you earn points, when you want to travel you spend your points. The site seems to be struggling to survive and they introduced some small booking fees in order to make it sustainable because when it first launched it was completely free.

I've accumulated over 4,000 points on the platform but haven't had the chance to spend them yet since the requests I make while travelling are often ignored, despite the fact that there are a plethora of listings. I wouldn't give up on this site though, it's a good idea and there is a large community behind it. Again there are many people from Hospitality Club in the community. 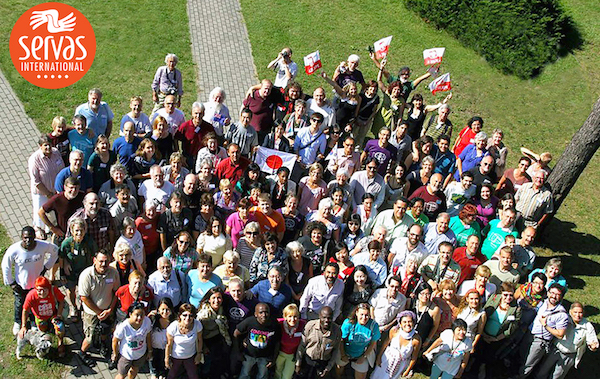 When discussing international accommodation SERVAS cannot be overlooked as it predates the internet and in some countries even the telephone. It started in the 1950s to build "world peace, goodwill and understanding by providing opportunities for personal contacts among people of different cultures, backgrounds and nationalities." For decades, SERVAS hosts and travelers communicated by letters. Some still do. I met some really amazing people on SERVAS, who expect you to stick around long enough to really get to know the place and the people, so it's not exactly suited for backpackers trying to fit 30 cities into 3 months. When you find a place you'd like to know better, then maybe it's time for SERVAS. 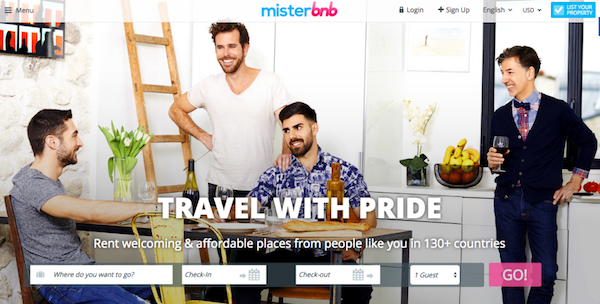 For gay travellers there is a gay version of AirBnB called MisterBnB, where you can find hosts that are gay or gay friendly, so you don't have to explain anything about yourself to anyone. This site is a pay site but if you are interested in the gay version of Couchsurfing for men which requires no money, there is this site. For men and women see LGHEI, which is like a gay version of SERVAS and is older than many of the other sites listed here. Couchsurfing and Hospitality Club also have groups for gay, lesbian and bisexual members.

11. Can I Stay with You While I Rent My Place on Airbnb

In the event you rent our your house out and have no place to stay, there is a growing network called Can I Stay With You While I Rent My Place on AirBnB, or CISWYWIRMPOA for short—though when I signed up I never got a response so it might not exist… yet.

The Evergreen Club is a low cost hospitality network for people over 50. Evergreen members have been creating a pool of spare rooms for "considerate" travelers. Currently, there are over 2,000 Evergreen home-stays throughout North America. The cost of the accommodation never exceeds $25 a night. Another popular arrangement for older people in the UK is Homesharing, which is for longer term accommodation but partners older people who have a spare room with younger people in need of housing.

For direct home exchange—by far the best option possible—there are many options out there, and it's hard to differentiate between them, so I'll name two of the more well known ones. Diggsville has been around since 1999 and is a free network with a huge variety of listings. HomeExchange has a one time fee to join and has about 65,000 homes to choose from, many of which are in the US and Europe.

Nightswapping appears to be mix of the attributes of many accommodation sites. You swap houses, though not necessarily at the same time, and you might choose to share the space with your guests or hosts, or not. It seems quite family oriented and the "currency" is a night for a night; kind of like a timebank for vacationers. 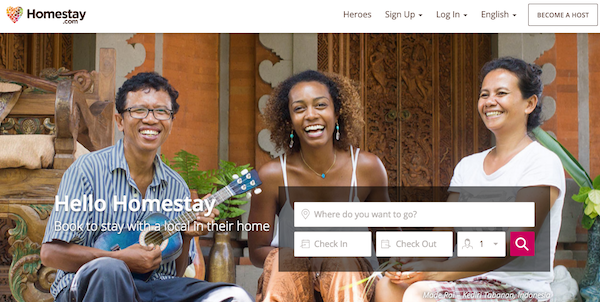 Another hybrid is Homestay, which allows you to get to know a local and their home. Unlike Hospitality Club and SERVAS, however, you pay them for this service, so it's like hiring a guide to go along with your accommodation and food. Shareable published an extensive article on this service two years ago.

So the next time your house gets rented to delinquents or you are spending more time on the phone haranguing the online staff or trying to quell your guests, remember that there are dozens of alternatives to the almost "standard" accommodation portals that you probably know by now. That way you can actually enjoy your self-imposed exile from your house and relax and learn like you deserve to!