Yes We Camp: A Global Fight for Radical Democracy - Shareable
Skip to content 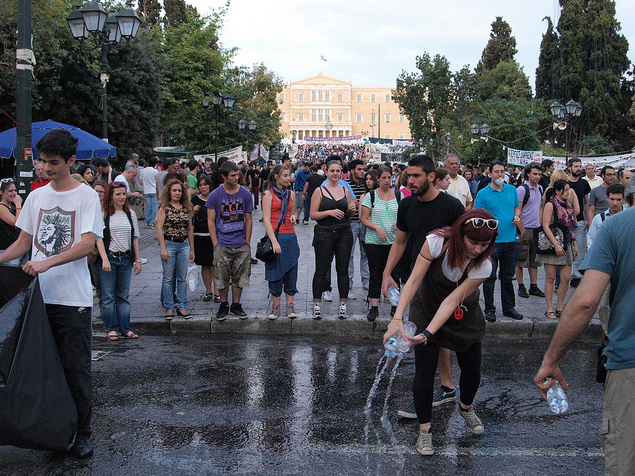 Millenials all over the world have received a brutal political education. The lucky few of us paid far more and will get far less for our college degrees than any generation before, we have watched with dismay as our parents squabble over light bulbs while the seas boil, and we have witnessed the steady erosion of public space, individual rights, the fourth estate, and checks on executive power. America has been at war for basically the entire adult lives of everyone under 30. The financial collapse of 2008 seemed to catch Baby Boomers by surprise, but for us, it was just another news story, a predictable event in a world spinning out of control. We have also grown up with racial and sexual tolerance as the norm (if not the rule), with communication and information constantly at our fingertips, and in a world where, though crises are shared globally, so is community.

We have seen the house of cards start to tremble, we have watched our future sold to the lowest bidder, and we see it happening everywhere at once.

Out of this potentially nihilistic morass a serious movement for change is emerging. Though it would be disingenuous to call it a youth movement – it’s too big for that – Millenials have been at the vanguard in Tunisia, Egypt, Syria, Greece, Ireland, Iceland, and Spain. We have developed new tactics, new ideologies, new ideas, and we’ve done it fast. Though strategies and expressions have varied to match cultural and national contexts, the movements share striking similarities. These movements have no leaders, no major political parties, no rigid ideologies and no demands beyond total, real, democracy.

“Yes We Camp,” one of the witty twitter hashtags of Spain’s 15 May movement, sums things up well. Inspired by the Arab Spring, galvanized by crisis, unemployment and austerity, fed up with the ineffective, corrupt, and often misanthropic political process, we are leaving our homes and moving to the street. In a blend of last-chance desperation and optimistic empowerment, we are building autonomous, totally democratic camps in city centers across the world. In these camps total inclusive democracy is praxis, everything is shared, and we build revolutionary consciousness everyday.

Perhaps no country is better suited to the radical democratic camps than Spain. A relatively young democracy, Spain has a rich political history of autonomous revolt and a strong cultural tradition of shared outdoor space. With unemployment hovering around 25 percent, and youth unemployment above 40 percent, a decade long housing bubble as dramatic as that in the US, and a series of dramatic cuts to social services being pushed by the EU and the ‘socialist’ Zapatero government, Los Indignados have over 60 percent popular support. I’ve discussed the history of the movement and life in the camps for Shareable before, but I’d like to zero in on the political methods and practices I witnessed (and took part in, to a limited extent) in Barcelona’s Placa Catalunya.

The camp is fundamentally organized around the principle of the General Assembly. If you’ve been in any kind of leftist meeting you have an idea of how it works: someone volunteers to be meeting facilitator, and people raise their hands to get on the ‘stack’. The facilitator calls on people in the order they volunteered, and only one person speaks at a time. They seek consensus rather than majority rule: all of the meetings I witnessed ended with dissenters agreeing to proposals and accepting the decision of the group. In a majority vote, voters are presented with a yes/no question and 51 percent carries the day, but in General Assembly proposals are built during conversation and debate, and as such actually reflect the desires of the group as a whole.

From the general assembly Los Indignados formed commissions, which focus on specific issues and questions within the camp, such as communication, international press, infrastructure, and food. These commissions set up their own booths and tents, where they work and remain available 24 hours a day, seven days a week to speak with the public walking through the square. Commissions all have their own assemblies, following the same methods. As such, all actions, choices, and movements are formed from the bottom up, not the top down.

Campers at Bloombergville in New York (courtesy of author)

This means, of course, a lot of meetings: it can be boring, and slow, and sometimes frustrating. But everyone takes part in the decision process, and everyone’s voice is listened to, not just heard. During a general assembly on Tuesday the 21st, a group of eleven and twelve year olds marched into the square chanting, to general applause. The assembly was paused to allow the kids to come up on stage and address the camp. What is lost in ideological rigidity you gain in respect, actualization, and consciousness. Democracy is messy, but efficiency is capitalism’s catch-phrase.

The camps also serve as action and information centers: people form actions large and small from the centralized point, allowing for a fluidity and speed of organization unavailable to other forms of organization. It also allows for simple scalability of involvement: core revolutionaries sleep and live in the camp, some people spend a couple days a week there, others only show up for major protests. This improvisational form of occupation creates a strong but fluid movement open to all and run by the people.

This is a practice of total democracy, of real, revolutionary tolerance. Los Indignados are 100 percent against violence, but they define violence to include homelessness, unemployment, hate speech and other forms of injustice. To quote the popular chant: this is what democracy looks like!

Similarly organized camps can be found throughout Spain, in Athens, and of course Egypt and Tunisia. Smaller camps have been springing up all over the world: England, Iceland, Italy, and France, throughout South America, even some in Japan and South Korea. 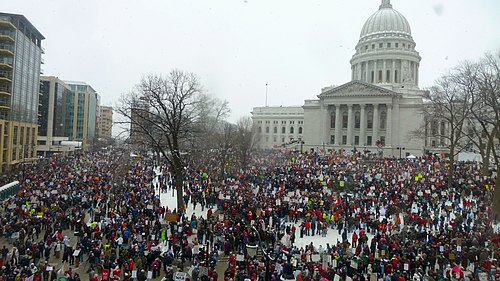 Walkerville in Wisconsin (via wikimedia)

They’ve been appearing here in the US too. After the people were kicked out of the capitol building in Madison, they spontaneously organized Walkerville, an anti-Walker camp and protest space. I am writing these words from Bloombergville, the New York City encampment built to fight Bloomberg’s 2012 budget. A camp sprung up in San Jose this week, and Boston last week. A group called “American Spring” has planned camps for next month in Pheonix, San Fransisco, San Jose, and across the Southwest, and a major anti-war encampment is planned for Washington D.C, slated to start on October 6.

It’s not clear whether all of these camps can succeed in their goals, but it is totally clear that this method is capable of transforming consciousness (particularly among millenials) and making a better future seem not only possible, but plausible. This is the new method of resistance, revolt and democracy developed by a generation with nothing to lose and everything to gain. We will be seeing many more of these camps before this crisis is over, and one may well be coming to your city. If it’s not, get your friends together, find points of unity, and grab your sleeping bags.