WTF is Wrong with Americans? [Infographic] - Shareable
Skip to content 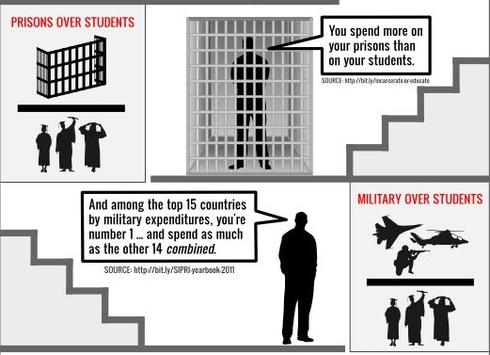 Our generation has been bought and sold. Told that college is the only way to have a stable future, we were convinced at 18 to agree to hundreds of thousands of dollars in debt on which we could never default. But we were assured that it would pay off. State college costs have increased at the same speed as private colleges, and the explosion of heavily advertised for-profit colleges which give the least ‘return on investment’ has been encouraged by a financial industry happy to give exorbitant loans, knowing that they’re guaranteed by the government, which is de facto selling the young into indentured-servitude.

But we were told not to worry, we’d be fine. Or at least better off than those who couldn’t afford college, for whom the best strategy was joining the army. We’d be better off than the millions of our cohort who, excluded from the ‘real’ economy of jobs and wages, work in the murky, informal and illegal economies of drugs and crime and who, snapped up by the state, are kept in the worst and most expensive form of ‘social care’, prison.

The largest employment and financial crisis in 80 years has revealed the mendacity of this system, has laid bare the lies of a government and a system that throws its young into the arms of loan sharks, un-paid “internships”, precarious employment without benefits or career advancement, and the military-industrial and prison-industrial complexes. We need to stand up and fight.

A number of these issues are addressed and confronted in the Shareable book Share or Die: Voices of the Get Lost Generation, which features many essays on our generation's plight. And the conflict between education, prison, and the military is attacked head-on in a new comic which wonders WTF is Wrong With Americans? And though I don't agree with focusing the blame on the entireity of the American people (as opposed to the heads of state and corporate bosses who have designed the system), I think there are many valuable points about the decisions and priorities of the American state.