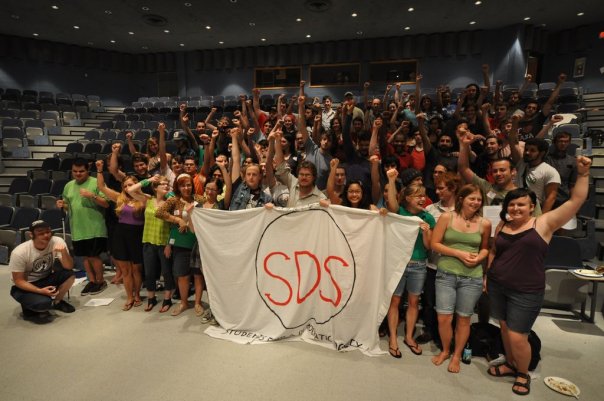 When I was in college a few years ago, I was part of a reborn activist organization called Students for a democratic Society. In the 60's SdS was a central student group for the white student left. In the early 2000s, it re-formed in some major US cities. As a freshman at the University of Maryland, I and some friends helped organize a chapter, linking us to the couple-dozen other universities and cities from Olympia, Washington to Gainsville, Florida.

At the time, the financial crisis hadn't hit yet and a lot of politically engaged students were getting excited about a (relatively) young senator from Illinois. It seemed a bit crazy to think about revolution or the end of capitalism, most were just looking forward to the end of the Bush administration. But SdS was an outlet, a real substantial place where student radicals could get together every week and discuss and put their theories to work.

Over a few years, we organized petitions and banner drops, panels and campaigns. But the most lasting thing we did was put together and attend regional and national conferences. Even though we spent a lot of our official time together arguing without mercy about which committees should be organized and debating in which order the facilitators should recognize raised hands, making connections with semi-like-minded activists from around the country was the real goal. The parties after the day's meetings and workshops where people tested out just-read theories on new friends, smoked way too many cigarettes, and danced till early in the morning were far more imporant as sites of nascent consciousness and ideology.

Housing was always an issue because we were almost totally broke college kids and it's not like schools were springing for hotels or something. These were not debate team trips. So local activists stashed comrades wherever they could fit. In my sophomore year, College Park hosted the national SdS convention, and the house where I lived with some other members must have hosted a good couple-dozen scruffy radicals for a weekend. We pitched tents in the backyard, stretched out sleeping mats on every inch of floor-space. Wherever we could wedge another skinny anarchist, we did. It was crammed, but it made for a great party and some lasting friendships.

It's different meeting someone in these kinds of activist situations. There are folks I remember from SdS that I haven't seen or spoken with in years, but I wouldn't hesitate to have them crash on my couch or pause before calling them to crash on theirs. I built up enough couch karma during those days that now, in my early post-school 20s when I might be doing a bit of bopping around on the cheap, I have places to crash in most big US cities and around Europe. People move around, but with social media, it's easier than ever to keep track of where they end up. Since moving to New York, I've reconnected with tons of people from SdS, and some of those relationships were crucially important to the Occupy Wall Street activism I've done.

The takeaway message is this: I've gone through a couple cycles of the activism-disillusionment when you go from a bit too idealistic ("We're going to change the world all at once right now forever!") to the excessively disappointed ("That was all a stupid waste of time, we were just a bunch of stupid kids.") Maybe the second is more accurate per se, but the real work we were doing was building the roots of a network for the coming years. The media likes to think Occupy Wall Street emerged out of nowhere, but my involvement couldn't have happened without those parties, which wouldn't have happened without those meetings. So maybe they weren't such a waste of time after all.