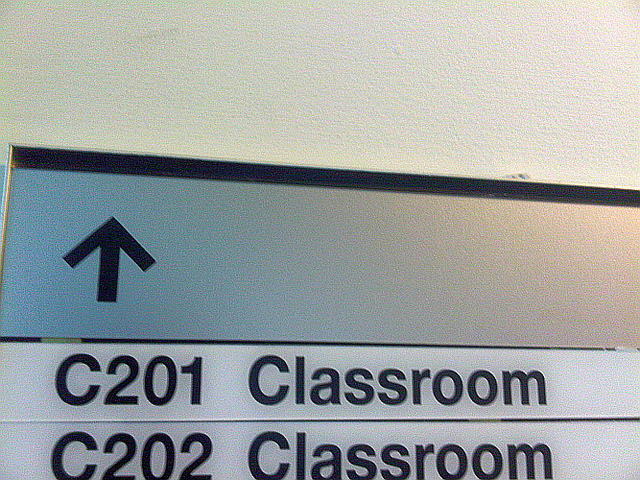 In addition to my Hollywood-fabulous careers in freelance writing and cartooning, I’m also a college teacher.  I’ve been involved in academics and teaching for a little while now, and I love it.

One of the things I love about it so much is that one of the tenets of my mission as an educator, something that more than a few of my bosses and deans have brought up, is that I actively foster communities in my classrooms.  It’s great, I get to enjoy creating environments where students not only feel safe, they feel a sense of wanting to come and learn.

There are both pluses and minuses to the newer faces of higher education these days. On a negative side, which I’ve experienced firsthand when I was in college, larger and commuter/part-time student bodies have slowly eroded the original community-building nature of a college and “the college experience.”

It was when I was in college, also working full-time and basically going back and forth from campus to my office and back, several times a day every day of the week.  Meeting new people and forming connections that lasted beyond a single semester was practically impossible.  And even though attempts were made by my college to create those sorts of relationships through shared class groups for incoming freshmen based on predicted career paths, it really wasn’t enough.  Only later on, well into my work and academic careers did I eventually begin to become part of those communities of fellow students, writers, editors, college administrators (I was an administrative assistant for years as a job in college).  It took a lot of time and luck, and still isn’t as extensive as I’d have liked it to be.

It’s a common enough problem, one that’s easily facilitated thanks to the influx of part-time students, students in colleges from varying generations and social backgrounds, and overlapping schedules composed of both work as well as learning.  The concept of a college student as being fresh out of high school and dedicating 4 years of their lives to getting that degree before entering the workforce is rapidly becoming a thing of the past in my experience, which means that the ease that young people of the same generation feel in creating connections is now rapidly evaporating.

Is there something though that can be done?  Is there some way that educators and administrators can work around that and bring back that sense that a college, however large or small, is a place to form communities and to share ideas and support structures?

I think that there is.  I honestly do think that we can bring the community aspect back to higher-ed life, and that it won’t necessarily take moving mountains and rewriting tenure in order to do it.  By viewing our roles in the academic community as not just facilitators of learning but also as leaders and community organizers, teachers and administrators can create places where students both learn and network, garner the skills they need for the job market and make the friends and connections in their new fields post-graduation that they’ll need for support.

At one of the schools I teach, we’re a small technical college focusing on general education and either electronics, accounting, or health care support.  And despite that, faculty are encouraged to do more.  We’re encouraged to do better, to create an environment where students not only learn, but feel safe and comfortable to learn in.  Classrooms are not just places for consistent “skill-and-drill” (as my dean puts it) exercises to enforce skills and lessons, but rather testbeds for all types of educational tools.  I just had a meeting a few weeks ago about alternatives to conventional lessons and utilizing groupwork to help students rely not only on themselves but how to work with each other and form working relationships.

This sort of stuff, from tricks for learning to allowing myself as a teacher to joke and laugh with them when I can tell that the burden of copying stuff off the board gets too much, that makes them want to come back consistently.  Retention (a consistent maintenance of the same number of students from semester to semester) leads to longer-lasting relationships and a comfort level that grows exponentially with the campus.  Comfort with being around fellow students and being on campus then leads to participation in activities like “family of student” BBQ’s and picnics, student literature readings, and even weekly poetry slams in the library.

Our graduates go on to take the practical skills and education they’ve garnered and apply them in amazing ways, with a recent pharmacist graduate returning to his home country of Ghana to help modernize the country’s pharmaceutical distribution and training system.

I’ll admit, it’s not much.  Especially in comparison to a larger college with thousands of incoming students every semester. And yet, I really do think that this sort of example from a smaller college could greatly help larger institutions. After all, the best routes to large-scale change often begin with the smallest steps in the smallest of places before ripping outward to affect larger-scale change.

Higher education is a place that definitely does focus on creating ideal learning environments. It’s up to students to make the commitments to their education and, for that period of time that they’re in school, work their lives around that schooling.  It makes being in college hard sometimes, leaving students with seemingly little support structure to make the time sacrifice worth it at all.

But they also can be places for communities to grow, helping students optimize their educational experience.  It’s something schools should strive for, and that in the future, I think will become more and more widespread.

Things I share: Skills & techniques (as a teacher), thoughts and ideas (with my writing), art and humor (through my comics).