The Most Sustainable College in America? - Shareable
Skip to content 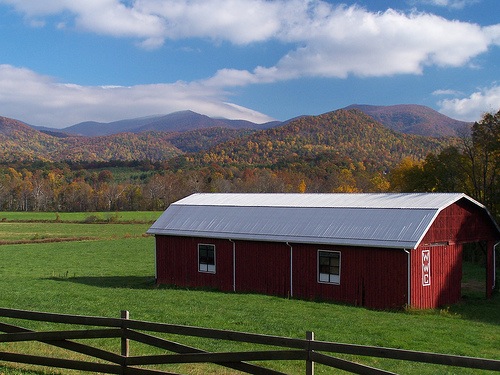 Tucked in a mountain valley on the outskirts of Asheville, North Carolina, Warren Wilson College has earned a reputation as a college whose graduates are well-versed in the practical realities of ecological work and life. Boasting a 300-acre livestock and field crop farm that produces 90 percent of the beef and pork consumed on campus, ten acres of orchards, and the state's largest solar array, the school might seem more like a self-supporting village than typical college campus.

But is it for real? These days, every college has a showcase program they trot out to prove their green cred. What makes Warren Wilson unique in the sea of self-avowed sustainability?

In part, the school stands out because they're not new to the game. Immersed in hardy Appalachian culture since its founding in 1894 as a mountain farm school, Warren Wilson never had to be sold on the concept of doing-it-yourself. Over the years, the college has developed an infrastructure that makes it an exciting model for a modern-day, low-impact local economy.

In addition to its beef and cattle farm, the college has a six-acre organic garden, operated by students, that produces 2,500 pounds of produce every year for the campus eateries. With its farming and gardening programs, the college is able to provide 6-20 percent of its own produce needs, depending on the season–impressive for a garden that's geared towards experimentation and education, not high production. They'll be able to raise that percentage this year with the addition of a large-hoop house to augment winter food production.

What the school can't produce itself, they try to source within 500 miles. One-third of the campus buildings were constructed by students, and students provide maintenance and management for all of the buildings. An in-vessel compost system breaks down over 50 tons of food waste a year.

A hallmark of the college is its work program: students form the core work force for the community through their activity on over 100 peer-led crews. Every student spends at least 15 hours a week on this day-to-day work, which in turn reduces room and board fees. Crews range from the popular Farm, Garden, Recycling, Forestry, and Local Foods, to the less popular (but necessary) work such as Heavy Duty (deep cleaning) and Dining (plenty of dishwashing).

What attraction does a rootsy college in a rural setting–with a hefty work requirement–hold for plugged-in twenty-first-century students? Turns out it is precisely its groundedness that makes the college appealing. Jeremy Lekich, a 2010 graduate who recently moved back to his hometown to open Nashville Foodscapes, an edible landscaping business, says, "Many students are tired of the traditional system of education in this country. WWC offers an opportunity to take what is learned in the classroom and apply it in a working environment. Youth are realizing this and moving towards an education that involves more than sitting-on-the butt learning."

Margo Flood, the college's Chief Sustainability Official, agrees that the most important learning environment is the campus itself: "Since our earliest days as the Asheville Farm School in the late 1800’s, students have come to Warren Wilson to learn by doing. Learning about self-sufficiency and sustainability by studying and then practicing the principles forms an unparalleled experience." 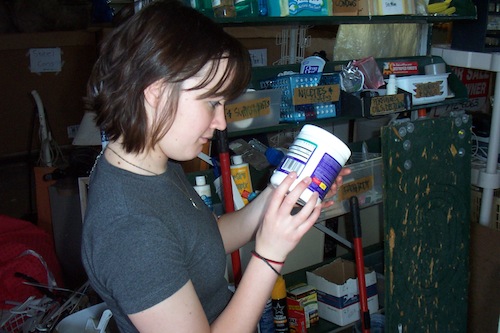 Through its work program and openness to student innovations, the college has created not just a hands-on educational environment, but an internal economy based on a shared commons. Students construct dorm furniture which remains after they leave. There is a well-stocked free store that contains everything from lighting to clothing to art supplies–all discarded materials being kept from the landfill. The blacksmith shop, a project pioneered by students, uses cordwood sourced sustainably from adjacent forestland (as do many of the buildings on campus). Students have created a Fiber Arts crew that manufactures rugs, scarves, and handbags, using yarn scraps and old clothing from the recycling program. There's even a student-run barbershop. The down home vibe carries over into social activities, which are more on the order of bonfires, skinny-dipping and contra dancing than blowout parties.

All this cooperation gives students a sense of responsibility that other academic environments might have a more difficult time rousing. There's a story about the late sixties at Warren Wilson: these were the years when more than a few college campuses across the United States were going up in flames due to student unrest. Though many Warren Wilson students shared these concerns, they said setting fire to their buildings was unimaginable, because they had constructed them.

Asheville resident Nicole Accordino graduated from Warren Wilson in 2007, with a major in Environmental Studies, and has lived in the area since. She is now in her second year as Garden Coordinator at Vance Elementary School in West Asheville, where her goal is to incorporate garden activities into the curriculum of every classroom. She explains, "Coming out of Warren Wilson–academically it was maybe mediocre–what I pulled out of that experience was hard work and being engaged in community. The people I spent time with here have the expectation to be involved in something and challenged. The college produces some really hard workers and determined folk that are willing to get sweaty and dirty. People are going with their passions–they are struggling a lot but are also determined." 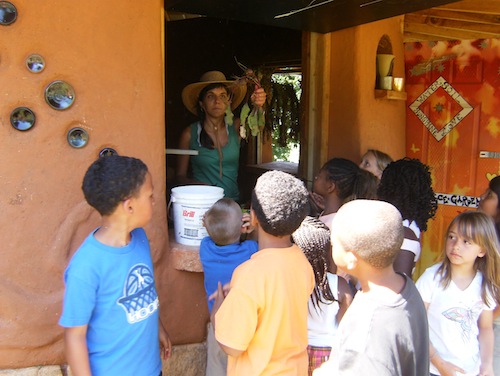 Nicole Accordino with students from Vance Elementary (no credit).

More important than any one project is the general attitude and commitment that the college holds towards using experimentation to move ever closer to, and measure, real sustainability. Innovation is encouraged through a grant program which funds student proposals. Flood says, "Many of our best practices originated as student proposals first developed in academic courses and then implemented by work crews or through service learning."

Students spurred projects such as a Leed Platinum-certified EcoDorm, the vegan Cowpie Cafe that sources most of its produce from the garden, and the use of biodiesel and solar-run vehicles. Back in the 1980's the recycling program, the first in the region, was created by a student who took a class paper to the administration. Lekich says, "Students are really the inventors and passion behind the school. They are the main driving force behind creativity and sustainability at WWC. Faculty and staff give support that in many ways allow the innovations to become reality."

All this encouragement notwithstanding, one drawback students describe is that the administration can sometimes lag behind in terms of putting their money where their mouth is. And speaking of money, the college's $30,000 price tag places it out of the reach of many prospectives these days–certainly most of the local youth in the immediate area. Although 90 percent of students receive some assistance, major financial aid packages are lacking. Perhaps this economic divide contributes to the students' description of their college as sometimes isolated and insular.

Accordino explains that Warren Wilson can feel separated from the surrounding area because, like many small liberal-arts schools, most of the students live on campus. "It's hard to understand how Asheville works and the dynamics of it. I didn't understand until my first year living in Asheville." Like her, many students decide to stay in the area after graduation because of their involvement in community work. 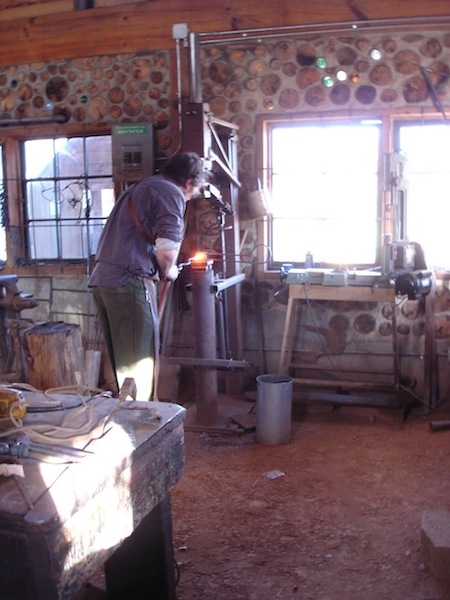 Indeed, it is primarily through the work of graduates who remain nearby that the Warren Wilson culture seeds itself in the community. One way the college encourages graduates to settle in the area is by providing grants for courses at Mountain Biz Works, a local nonprofit that provides training and loans to small business entrepreneurs. Looking into the origins of many small businesses, farms and community gardens in the area, there are often a couple of Warren Wilson graduates at the helm.

Many of the mainstays of the local community, usually projects that promote relocalization, directly evolved from the college. There's Hickory Nut Gap Farm, a grass-fed meats operation, run by a couple that started the farm with a plan created as a school project. Bluebird Farm, which produces pork, chicken and vegetables, was recently founded by two students who moved back home and have become representatives of the local food movement in their farming community an hour east of the campus. The nation's first "edible" park in downtown Asheville was created in a rubble-filled lot 12 years ago by Wilson graduates. Among the bounty there are multiple fruit and nut trees, medicinal herbs and, more recently, annual vegetables, all free to the public.

Can other colleges interested in becoming more self-sustainable look to Warren Wilson for pointers? In Lekich's opinion, "The first and most important step a school can take is to purchase foods locally. There are many great farmers out there in almost every area of the country. The school can find out where the farms are and then create a purchasing plan to use seasonal produce. Then, if a school can start some small-scale food production, that would be great. Eventually it would cost the school less then the food they purchase elsewhere."

Of course, every college is not lucky enough to have the natural setting that Warren Wilson enjoys. Flood acknowledges, "We are fortunate to have abundant natural capital, a legacy of strong ties to the land, and a commitment to live sustainably. Other schools that do not have such extensive natural resources might take smaller steps, and as an example, whether in an urban or rural setting, start a community garden as a collaboration between disciplines."

One option that seems within the reach of most schools is creating a work requirement for every student, not just those receiving financial aid. Any academic environment can benefit from the sense of connectedness a work program engenders–and if it can reduce student costs, so much the better.

In general, schools would do well to recognize that there is a growing attraction to simple, meaningful work: many young people are interested in not just sitting behind a desk, but closing the textbooks, getting their hands dirty and learning what it means to sustain their own communities.

Amy Hamilton lives in Asheville, NC where she gardens, dances and writes.

Amy Hamilton lives in Asheville, NC where she gardens, dances and writes.