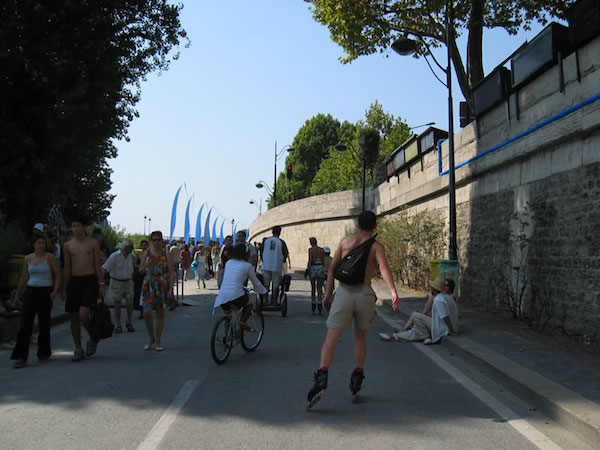 The Paris Plage along the Seine, pictured above, is an ideal public space.

So often we see cities as a stage upon which we can rehearse ideas of technology, economics, and placemaking, yet we usually forget to consider what I call a social urbanism. What I mean by this is simple. Many urbanists, including Edward Glaeser and Charles Montgomery, rightly observe that the city is made out of people, not buildings. But what does this really mean? And how should this view radically alter our ideas of who the city is for, what the terms of belonging might be, and how to become a citizen?

I was reminded of the importance of social urbanism last summer when I heard the story of Erdem Gunduz, the young protestor who, on the evening of Monday, June 17, walked onto Taksim Square, put down his rucksack, and turned to face the Ataturk Cultural Centre at the end of the square. There he stayed for the next eight hours, saying and doing nothing except occupying the space where he stood. In that moment he reclaimed not just the power of that public place–which was contested at that time–but also his right to be there, to be a citizen.

It is surprising how often we forget that we are meant to be together and that coming together brings out our best selves. In its 9,000-year history, the city has been the place where strangers have come together for multifarious reasons; but in that coming together, the city has become greater than the sum of its parts. This is what Jane Jacobs was describing when she talked about the ‘Ballet of Hudson Street.’ In an unforgettable description of what she saw and heard on an ordinary day standing outside 555 Hudson Street, Jacobs followed the traces of the complex city as it interwove in front of her doorway. What she discovered in is the genius of the city: connections and networks. 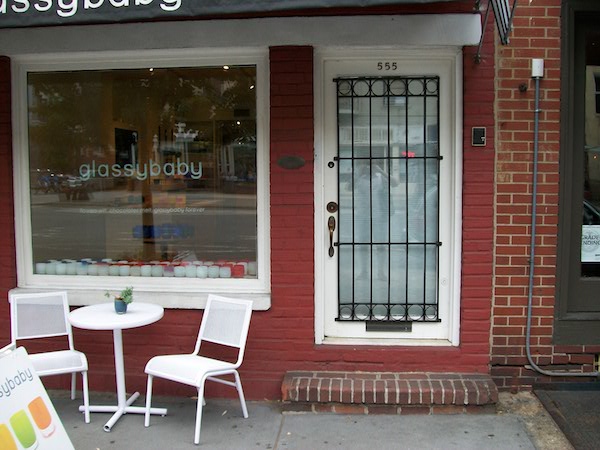 Jane Jacobs was also the first urban thinker to talk about the city as a complex place. The city exists on the edge of chaos, but displays extraordinary emergent characteristics. As a self-organizing system, it grows strength from its connections, its densifying weft and waft. This natural complexity, which economists now try to model in order to understand why cities are so productive, drives the thinking behind why the city is so super-charged. And it is with this fabric that technologists wish to second-guess human relations with the ‘internet of things.’

The theoretical physicist Geoffrey West and his team at the Santa Fe Institute unearthed the strange power of urban metabolism in a brilliant series of speculations that explained how cities become more productive, creative, and sustainable as a population grows. In fact, the city grows at a super-linear scale so that as it doubles, it increases these measures by 115%.

In addition to West’s calculations, other studies have shown that we are clearly meant to be together. Charm Offensive, a 2011 study by the Young Foundation, recorded levels of civility in three different parts of the UK: a market place in one of the poorest boroughs of London, a new town in Cambridgeshire, and a selection of villages in rural Wiltshire. The study found that politeness is not a question of wealth or homogeneity, but of proximity and interaction. The marketplace in the East End of London, despite being a place of huge diversity, was also the place where everyone was willing to muddle along. There was equality amongst stallholders and shoppers to make this a good public space.

This seems to align with Richard Sennett’s mantra that we need good public spaces in order to learn the rules of coming together. For despite our deep desire to be together, we are not equipped at birth with the necessary tools for being the true social animals that our instincts tell us we are. Without these genuine public spaces, we cannot learn the language and conduct of civility—and we cannot become citizens.

Yet all around us public spaces are under threat. Closed-circuit television equipment has been installed to monitor our movement, for example, and now drones with face recognition software can identify us from 1000s of feet overhead. Here’s another example: it recently became clear that bins installed by the REnew company were picking up information from the smart phones of passersby in the City of London. Gated communities, or the idea behind defensible space, also compromise the promise of true public space.

These kinds of modern, privatized spaces reduce the many different relationships the city can offer to consumer and producer, watcher and observed, landlord and tenant. In addition, inequality creates a geography of difference, which turns formerly public places into forbidden and foreboding spaces. This is what happens to a city that is owned and governed, not shared.

But what are we to do about this? The assumption that the city was held in common at some point in time distorts the debate. However much we might want it to be true, it is not. The pursuit of a more equal and shared city is a hope for the future rather than a nostalgia for some lost past. Public space has always been contested, but this should give us courage to act.

There is something important that occurs when we occupy public space. Not only does the action itself reclaim the urban place for the benefit of all, but it creates citizens, like Erdem Gunduz. Thus the idea of a truly social urbanism is one that combines place, action, and citizenship. The space can only be public because it has been reclaimed.

This calls for constant vigilance, as well as a new set of values that rewires the way we think about the city. These values might include trust, equality, and the right to the city for all. The relationship between trust and equality is indelibly interlinked. There can be no trust when there is “us and them,” the “haves and the have-nots”; trust is the glue that brings the city together and allows the nurture of civility.

In The Moral Foundations of Trust, the American thinker Eric M. Uslander posits an alternative to the proposals of Robert Putnam or Francis Fukuyama. Where Fukuyama suggests that trust evolves out of the deal, and Putnam sees trust emerging from participation, Uslander suggests that we are instinctive trusters. Rather than A trusts B because of C, A just trusts.

But what breaks this trust is inequality, the loss of empathy, which we can see all around us in the contemporary city—and it is getting worse. Today, American cities display unprecedented levels of inequality in parallel to some of most stricken developing nations. By addressing inequality, the steps we need to take to revive and rediscover the power of public spaces, and reclaim the city for all will become clear. For if the city is not for everyone, it benefits no one. 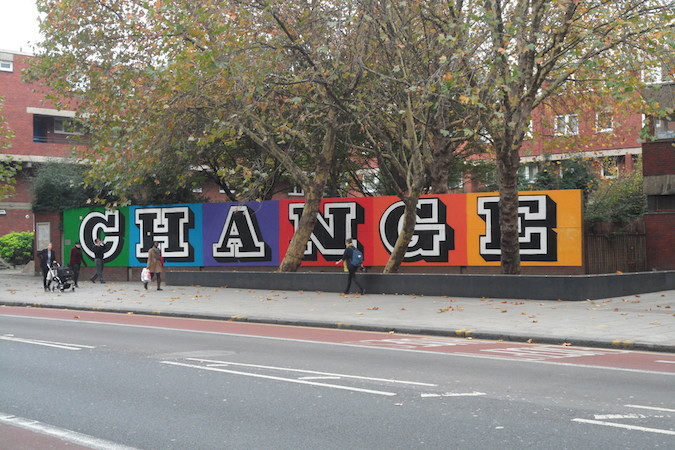 A billboard in Shoreditch, east London, calling for change.

Leo Hollis was born in London in 1972. He read History at university and is the author of two books on the history of London: The Phoenix: The Men Who Made

Leo Hollis was born in London in 1972. He read History at university and is the author of two books on the history of London: The Phoenix: The Men Who Made Modern London and The Stones of London: A History Through Twelve Buildings. He writes regularly for the New Statesman, and the Guardian. His latest book CITIES ARE GOOD FOR YOU: THE GENIUS OF THE METROPOLIS was published in 2013 and was described by Michael Sorkin as a  'wide-ranging and acute observation of the interactions of the social and the formal that maps an optimistic and incisive vision of an emergent - and indispensable - urbanism predicated on sustainability, equity, imagination and trust.' He lives in London. His blog can be found at www.citiesaregoodforyou.com.