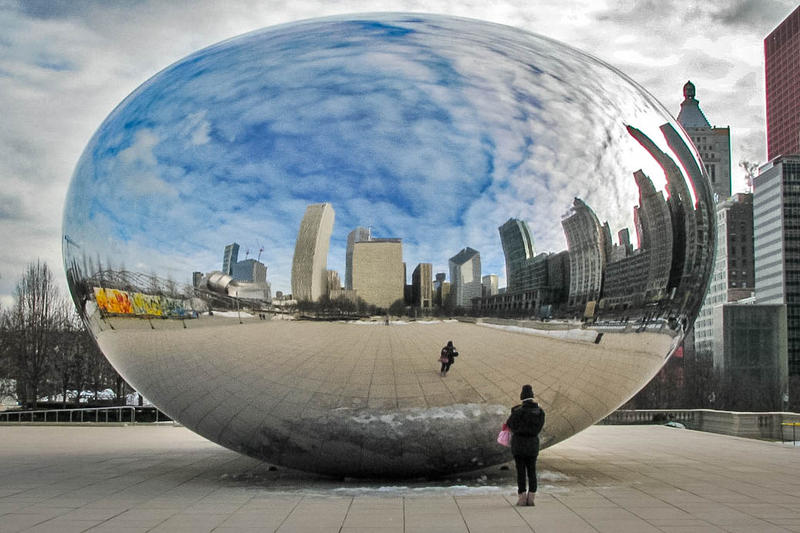 People like to move. Hundreds of millions of people around the world pack up and hit the road at some point: seeking greener pastures, finding work, following family members, escaping strife, and just going someplace. Human migration has been a part of our nature since we populated Pangaea. And though modern borders and immigration policies slow the ebb and flow of human movement, decreased racial and cultural boundaries are allowing disparate cultures to intermix, particularly in modern cities.

In 2010, 214 million people – 3.1 percent of the world’s 6.1 billion human occupants – were living outside of their native countries as immigrants. The majority of those people traveled to more developed areas. Cities everywhere are growing, fast.

With the world’s fastest-growing cities spread literally around the globe, it’s an exciting and important moment for civic strategists. The current wave of migration will reinvent many cities as we know them, making them dramatically more diverse than in the past. The effects will be magical and, in some cases, intensely dangerous.

President Barack Obama touched on this topic when calling for immigration reform in last week’s State of the Union address. "Our country is stronger when we harness the talents and ingenuity of striving, hopeful immigrants," Obama said. Immigrants bring economic activity, ambition and a diversity of thought and behavior – but when new populations aren’t successfully integrated, the result can be xenophobia, segregation, poverty and violence. Even in the United States – one of the world’s more immigrant-friendly nations – it’s common to see ethnically segregated neighborhoods, churches, schools and their associated opportunities. Left unchecked, segregation can escalate to crime and brutality, race riots and even ethnic cleansing.

“Government works best—most responsibly and responsively—when it is closest to the people it serves and the needs it addresses,” wrote urbanist Jane Jacobs. While immigration is always a national issue, the mechanics of integration happen at the civic level. So how can modern cities be sure they’re welcoming immigrants – reaping the benefits of diversity instead of creating tension and danger? Cities of Migration has the answers.

A showcase of successful integration projects from cities around the globe, Cities of Migration hopes to provide not just inspiration but a set of tools that any city government can use to build a strong, diverse community. Some of solutions go well beyond what you’d expect, with surprising effectiveness.

Cities are hubs of skill and innovation – and increasingly, modern cities are seeing immigrants as sources of potential and opportunity. But “It’s not enough to attract international skill and talent,” Turner says. “The secret is to attract and retain.  People need to feel welcome, included, be able to participate and develop a sense of belonging – maybe even a path to citizenship.”

When newcomers feel welcome and have a reasonable financial foundation, they stay and contribute. Major cities are starting to advocate for immigration reform because it’s just good for business. Chicago is spearheading a national movement in the US, with a sweeping new initiative called the New Americans Plan. Mayor Rahm Emanuel says the goal is to make Chicago the most immigrant-friendly city in America.

“I want our city to be the first destination for immigrants because they are going to create the jobs, create the new companies, the businesses of the future,” Emanuel says. “We have to be the most welcoming cities we can be.”

In real terms, that means a top-down initiative run by the newly-created Office of New Americansand advised by 50 local leaders representing all the major communities in Chicago. 27 initiativeswere launched in late 2012, including business incubators, pop-up city services, education programs, support for undocumented children, and significant community outreach and engagement. It’s a massive undertaking with a good chance of success: Chicago is one of the most diverse cities in the United States, and rebranding it as an immigrant-friendly destination will undoubtedly bring in new residents while improving cultural dynamics.

Chicago isn’t alone; the Council of Europe and New York mayor Michael Bloomberg are also advocating for integration. City initiatives in Londonand San Franciscoare actively working to help immigrants gain their financial footing so they can contribute to the local economy. 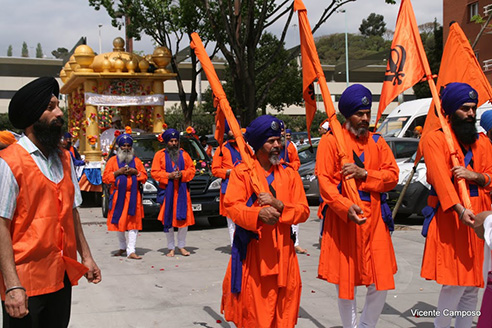 Community-Based Change: Taking it To the Streets

How do you get to know your neighbors? By walking through your neighborhood. Cities worldwide are encouraging community integration simply by getting people onto the sidewalks.

The Hague and Toronto both organize walking tours of immigrant neighborhoods, markets and places of worship. The Hague focuses on tourism, capitalizing on its emerging reputation as a multicultural city. Toronto invites teachers on its tours, giving them insight and awareness into the lives of their students.

Meanwhile, the City of Auckland takes a different approach: the Walking School Bus gives students safe routes to school by organizing them along more than 300 routes, with set departure and drop-off times. Students and parents walk together in groups, staying safe and getting to know each other in the process.

Badalona, a city of 200,000 on the outskirts of Barcelona, had a different problem: a rapidly growing Sikh population that was not integrating with the native Spanish residents. When the Sikh temple wanted to host a religious procession, Badalona officials gave them a condition: They would need to go through a mediation and facilitation process with the local neighborhood association. Once the two groups started talking successfully, the parade was approved and some native residents even joined in. 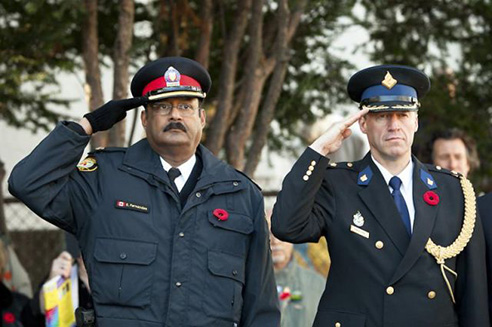 Police Ambassadors: Beyond Keeping the Peace

It can take decades for a migrant population to gain acceptance in a new community without help from civic leaders. In 2008, the Netherlands realized it had a problem with its police force: Namely, high numbers of women and ethnic minorities joining the force only to drop out. With a growing immigrant population, the country took action to improve its police force’s intercultural awareness. Police Commissioner Patrick Voss relocated to Toronto for two months, to see how its police work toward cultural peacekeeping in a highly diverse city.

Voss shadowed Superintendent Sam Fernandes, spending every day with a different group of Torontonians. “We talked about the importance of multicultural experiences; getting outside your comfort zone every day and seeing the world with a different perspective,” Voss wrote in his blog of the visit. “This, according to him (and me, in all modesty) is a prerequisite for leadership in this complex world and virtually every police force in the world.”

Voss’ cultural training is just one of many experiments police forces are undertaking. Their role is ever more challenging, and in many cases they do act as ambassadors between communities that might not see eye to eye. Other successful experiments helping police connect with local populations: 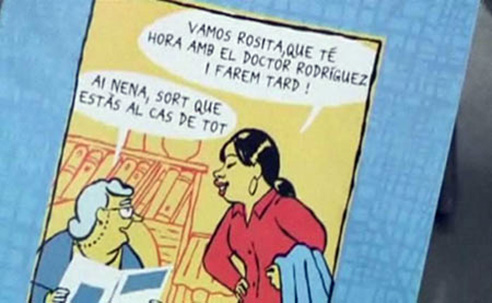 No matter what a city does from an organizational level, it can be difficult for an existing population to welcome a wave of newcomers. Cultures and religions easily clash. Language barriers and foreign clothing styles may cause uneasiness, particularly when the either or both groups feel threatened or overlooked. In most cases, there’s a significant amount of community outreach to be done – and the best way to do it is by unblocking cultural channels.

Visual Art: Barcelona’s Anti-Rumor Campaign aims to open the conversation with humor. The City Council worked with a local artist to create a comic book about an elderly Spanish señora and her Peruvian helper, breaking down stereotypes by sending its characters through a variety of quotidian adventures. The “Did You Know?” video campaign is a series of humorous videos, such as this one poking fun at the stereotype that immigration endangers cultural identity:

Libraries and Education: Since 1977, the Queens Public Library in New York has been working to become a center for knowledge, culture and language exchange. 55 percent of the population of Queens speaks a language other than English at home, and the library performs a crucial function for the diverse and often lower-income population. In fact, it’s the nation’s most active library, circulating more than 23 million items in 70 languages. But its cultural resources aren’t limited to providing information on American culture to immigrants; it also maintains an extensive international collection and conducts programs to share literature, performance and folk art from throughout the world.

“When I remember what happened to me I feel bitterness in my soul,” Fayhaa Abdulwahab told Cities of Migration. “But when I see people listening and sympathizing, it helps remove it. I feel that there’s hope in humanity.” The museum also incorporated language sessions and live performance to help visitors connect with the diverse cultures being represented.

Our Cities, Our Future

“As cities adjust to changing economic conditions, they also remain central to the social integration of immigrants across all areas of everyday life,” Turner says. “Unlike business enterprises, cities and towns must also seek approaches that are sustainable, inclusive, ecologically sensitive and globally responsible.”

Our global culture is continuously shifting, even more rapidly now that technology connects us across great distances. Good ideas for improving cultural relationships abound, both from cities and from community organizations. What can you do in your own city to increase diversity?