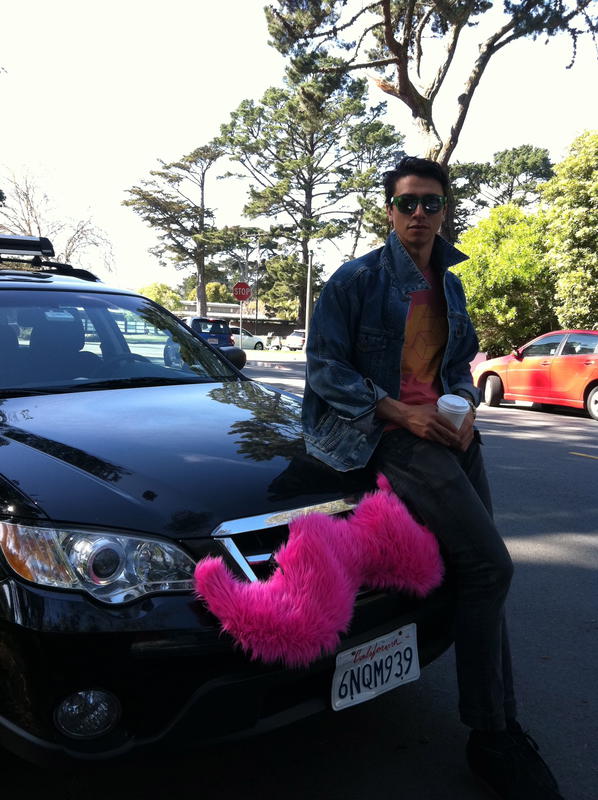 Tonight I’m driving for Lyft—the conspicuously stylish, pink mustachioed ride-sharing service based in San Francisco, my current home. That in itself is unremarkable; there are many people like me living parallel lives: I have a car (a Subaru Outback). I live in The City, where I regularly and graciously receive $62 parking tickets for not having a J permit. I pay an increasingly onerous amount on rent for a room that curiously shares the qualities of a diorama. And, like many 20-somethings with a degree in political science, I am woefully under-employed in my field. My dad’s response, which has become a refrain: “as long as you’re on a path…”

What’s remarkable is that I haven’t driven for Lyft in almost two months. Though drivers are encouraged to spend time on the road each week (approximately 10 hours), this “minimum” is more a friendly suggestion than a rule. Many drivers I’ve talked with, like me, slip in and out of Lyft’s network as their day jobs, schooling or passions fluctuate. According to Lyft, the company has hundreds of drivers in its network. But only a fraction of which can be seen driving on a given night.

That kind of as-needed convenience has obvious benefits. For ride-sharing companies such as Lyft, flexibility helps attract, empower and retain drivers. And for me, and myriads of artists, freelancers, do-gooders, people in search of work, recent graduates of the humanities, and the under-stimulated, it means an on-demand revenue stream and the opportunity to find meaning on life’s winding road. The latter of which is a true rarity and a real boon.

I signed up to be a driver in a fever panic. It was late December 2012. The fog had rolled into my sleepy Inner Sunset neighborhood and had, like a bad houseguest, decided to stay “just a few more weeks.” Lyft had been operating for the better half of the year. And, as was my custom, I was broke, without having done my Christmas shopping. I was starting to imagine the look on my dad’s face as he opened the festive envelope—“Honey, Nick sent limericks again… nice font though.”

I was working from home at the time, doing research and providing editorial assistance for a book project on social entrepreneurship. Loved-ones could find me in my room with the shades drawn or at UCSF’s library posing as a med student, sitting in the writer’s position for hours on end, waiting for lightning to strike. I’d often find myself drifting off into a world away from screens while drooling into mine. Then I’d come to and realize that I couldn’t bill the last hour of work. At 25, I was becoming crotchety, donning sweatpants and Crocs. My socks rarely matched. These are the pitfalls of working from home.

I had heard about Lyft through a friend who moonlighted as a driver while attending the College of Traditional Chinese Medicine by day. She had spoken glowingly but with a poetic vagueness about her experience chauffeuring strangers in the middle of the night. So I Googled the pink mustache and founds answers.

“Would you rather be a fruit or a vegetable?” an enthusiastic voice asked during the phone interview to become a driver. “Definitely a fruit, more specifically a tomato so I could pose as a vegetable,” I fired back without a touch of irony.

I was nervously pacing in my bedroom/home office.  The voice in my head said, “That was definitely too corny and weird for someone who’s supposed to be trusted   driving strangers.”

I stopped pacing and exhaled.

In the seven months since becoming a Lyft driver, my computer work has become much more manageable, even pleasant. Long periods of not talking to people are now punctuated with an hour of driving interesting and fun folks of all stripes during the day. Writer’s block is now something to look forward to. Before Lyft, my response to arrested creativity was to sit in my garden and pout, maybe cry. Now I can hop in my car and earn some money instead of idling my day away.

But perhaps most crucial to the casual soul searcher, Lyft allows its drivers to experience real human interaction with people outside their circles and themselves. ­Forced interaction—having to sit next to a complete stranger for up to 20 minutes at a time, in traffic—is where serendipity exists and magic happens. While driving, I’ve met people who grew up in my neighborhood and share my friends in D.C. I’ve gotten leads on tech-companies and the colorful people behind them, sometimes breaking their story before TechCrunch. I’ve had the pleasure of driving strippers to North Beach, ravers to warehouses, cooks to their kitchens, climbers to the gym, and CTO’s to their very important and esoteric meetings. Nearly every pick up yielded a candid window into an unfamiliar life, which helped inform my own.

A steering wheel and a pink mustache for a journalist—much like a stethoscope for a doctor—offers an air of legitimacy, turning an ordinary, inquisitive dude into a symbol of trust. When a person hops into my mostly-clean car they’ll first look at me to see if I’m crazy. If everything checks out, they’ll then start opening up, like old friends at their high school reunion. “So then my landlord’s mom said to me I should just…”—nowhere have I had better conversations with strangers than in the comfort of my car.

I’ve come to find that given the right prompting questions, every passenger has a story to tell. Many won’t fall under the 24-hour news cycle but most are newsworthy, if not ridiculous or inspiring. Like the guy who, after a painful divorce, moved in with a bunch of post-grad punks, quit his desk job and started perfecting pork belly burger recipes with all his free time. I saw him just a couple months later operating a successful pork belly pop-up on Dolores Street. Stories of creative destruction abound in this city.

Keeping busy without having to focus on a single project has been a breath of fresh air. So is driving with the windows down. With the extra income from Lyft, I’ve been able to take on work-trades and pursue otherwise-impossible learning opportunities. I was able to finance some trips, too. On one of such trips—a road trip to the Yukon—I got lucky and met Wade Davis, explorer in residence at the National Geographic Society, who gave me this little piece of advice: “A career is not a coat that you just put on. It’s a patchwork that’s woven around you.” I couldn’t agree more: write, intern, learn, drive.

Nick Hiebert is a freelance writer based in San Francisco. While not at the HUB SF, helping launch its media lab, Nick can be found in his bedroom/home-office, researching and

Nick Hiebert is a freelance writer based in San Francisco. While not at the HUB SF, helping launch its media lab, Nick can be found in his bedroom/home-office, researching and writing about the changemaker economy for Deloitte and Bay Area publications, or at Ocean Beach, catching wonky surf.