Rider's Delight: How Two Lyft Drivers Bring the Party to the People - Shareable
Skip to content 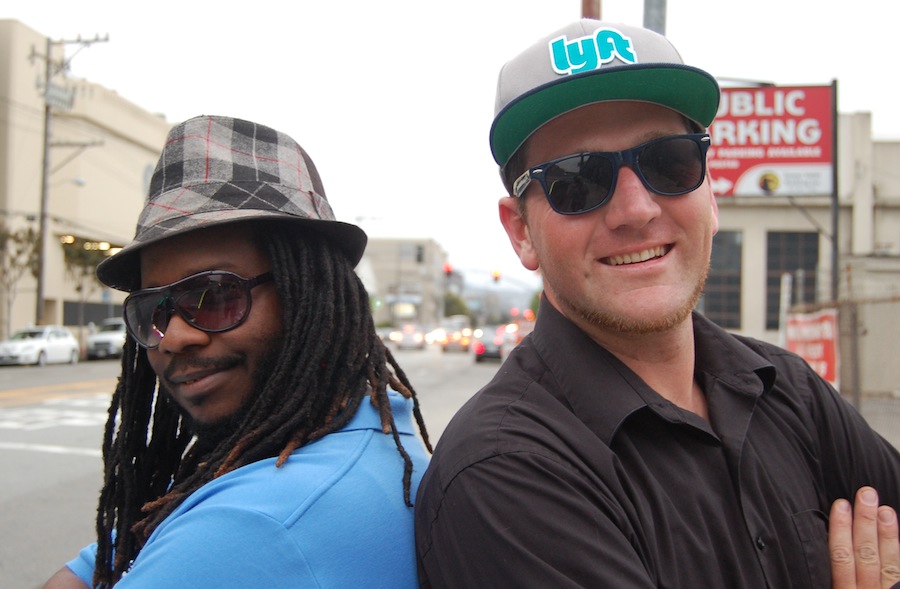 While there are plenty of Lyft drivers who simply transport passengers from point A to point B, DJ DiscoLyft and HipHopLyft turn a cross-town ride into an event.

“I’ve heard about you,” hollers a young guy driving a car with a giant pink mustache on the grill. “You’re like an inspiration for the rest of us. I was starting to think you were a myth!”

I’m sitting with Matthew Earnest, a.k.a. DJ DiscoLyft. We’re parked in his tricked-out, LED light-strewn Prius, affectionately known as the DiscoLyft, outside of Lyft headquarters in San Francisco. He’s telling me about his experience as one of the ridesharing app's most high-profile drivers, and he’s drawing attention.

“HipHopLyft is right here,” Earnest hollers back, pointing behind us to where Deco Carter is standing on the sidewalk. “We’re having a summit,” he adds with a laugh, “a superhero summit.”

Earnest invites the guy, whose name we’ve learned is Jeff, to a Lyft drivers' dinner the next week and off Jeff goes, now certain that the DiscoLyft is indeed real.

So it goes in the world of DJ DiscoLyft and HipHopLyft, where friends are made by the minute and the party is always on. While there are plenty of Lyft drivers who simply transport passengers from point A to point B, these two turn a cross-town ride into an event.

DJ DiscoLyft, who also DJs under the name DJ Domes, has customized the DiscoLyft with a discoball (of course), a DJ setup, a karaoke microphone, a smoke machine, a veritable light show and more. HipHopLyft, who used to be an MC in a Bay Area rap group, has taken his love of classic hip-hop and created a Lyft experience of his own that includes curated hip-hop playlists and a friendly game of hip-hop trivia, complete with prizes. 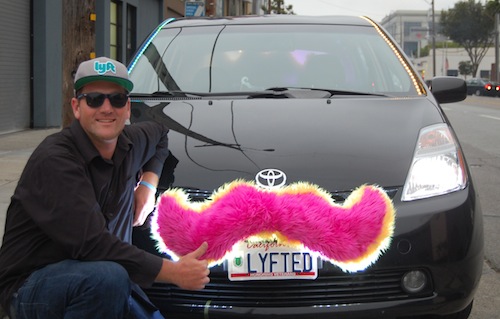 This level of personalization is one of the ways that the peer-to-peer movement flips the old economy on its head. These guys work for themselves; they work when they want to work; and they trick their cars out in any old way they like. They’re also part of an ever-growing community of Lyft drivers that, independent of Lyft officials, is growing itself from the ground up.

I learn that the San Francisco drivers have pop-up street parties, underground dance-offs, monthly dinners and recently even had a camping trip where Northern and Southern California Lyft drivers met at a campground to spend some time relaxing together in the great outdoors.

“This is all community stuff that the drivers are doing,” says Earnest. “We’re doing our own team-building stuff; just connecting and keeping people boosted about the community. If you lose that essence of community when Lyft expands, it’s just going to turn into another driving service.” 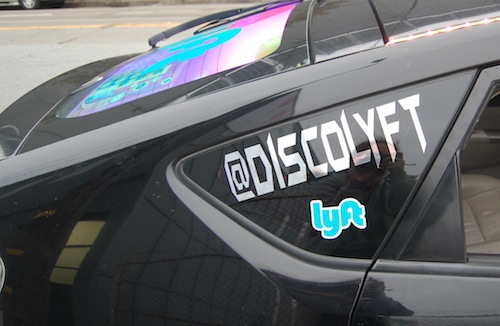 The DiscoLyft: a car with its own Twitter handle

When Earnest is in other cities, he throws parties for Lyft drivers, connects with the local community and hooks up hard-working drivers with LED mustaches for their cars. He does this all out of his own pocket. He says it’s his way of giving back.

“I left a dead end job, came and did something new, cutting edge and revolutionary, and made a lot of friends in the process,” he says. “I actually owe a lot of my happiness and what not to Lyft.”

While Earnest isn’t driving full time anymore, he’s still a key part of the thriving Lyft community. In fact, he made such an impression on Lyft that they hired him, so now he’s focused on his new position rather than driving. But he has five other Lyft drivers on his insurance so the DiscoLyft is still in action. 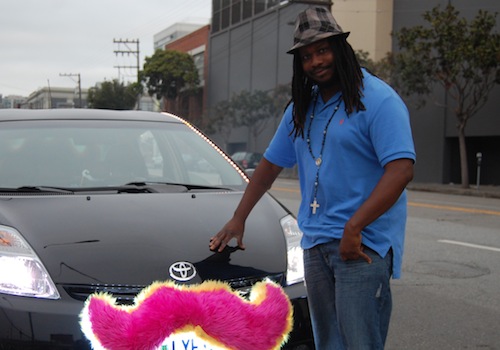 As it turns from dusk to dark, Earnest gets out of the driver's seat and in hops Carter, who normally drives his own car, but he’s one of the drivers covered on Earnest’s insurance and is taking the DiscoLyft out tonight.

Carter opens the Lyft app on his phone, changes his driver’s status to available and within about four seconds we get pinged that there’s a ride request nearby. He accepts it, turns on the GPS, puts “Rapper’s Delight” on the soundsystem—this car does not have a stereo, it has a soundsystem, complete with a mixer, parking lot-filling speakers, and at times, a DJ setup in the trunk—and off we go.

For the next hour, I ride around San Francisco with Carter. Like Earnest, he’s warm, easy-going and funny. He puts riders immediately at ease with the standard Lyft fistbump and a contagious laugh. If riders are down for a round of hip-hop trivia, Carter switches the music to match the questions and asks away. If riders don’t know an answer he cooly plays it off. If they do know an answer, he hypes up the fact that they’re doing great. 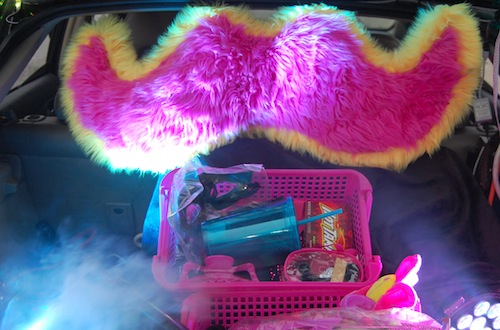 A fan of old-school hip-hop, Carter asks questions about classic album covers, Tupac's death, Snoop Dogg's new name and more. The questions get progressively harder but in the end, everyone who plays along gets to choose a prize from a basket in the trunk stocked with candy and toys.

As people on the sidewalks notice the DiscoLyft, now glowing bright in the night, they have a variety of responses. Some point and smile; some grab their friends saying, “There’s a Lyft car”; and more than a few people say excitedly, “There’s DiscoLyft!” To say I’m having a good time is an understatement. We’re having a ball and I’m feeling like I’m part of something that's so cool, so innovative and so neighborly that it makes the dense city feel friendly and connected.

At its essence, Lyft provides rides to people who need them and income to drivers. Some drivers work during the day while others supplement their day job by driving nights and weekends. That’s the beauty of the arrangement: drivers can drive whenever they want for as long as they want. Earnest and Carter both stress that it’s this freedom that makes Lyft such a good thing for them.

In between riders, Carter tells me that, as a stay-at-home dad, being able to drive for Lyft at night has changed his life. He’s currently saving up to take his family to Disneyland.

“It’s so cool,” he says. “It’s funding my whole Disneyland trip and I’m having fun doing it. It’s not breaking my back, I’m not stressed out about it and I’ll be able to do this for my kids.”

We pick up and drop off several riders in the next hour. Some of them just want to talk about hip-hop, others try their hand at a round of trivia. One rider who is particularly knowledgeable about hip-hop answers all the questions correctly. Carter’s excitement about the perfect score has us all laughing and talking about hip-hop’s good old days, feeling like friends out for a drive. When we arrive at our destination Carter pops the trunk to reveal the prizes, which are accompanied by a fuzzy pink mustache and lots of lights. Our winner chooses a box of Hot Tamales. 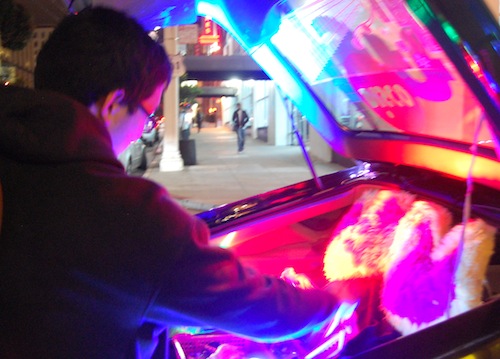 When Carter and I get back in the car, he looks over, smiles, and says, “That’s how I do it.”

I just shake my head, marvelling at how much of himself he gives to his job, how fun he makes it for his passengers, and what a great time he has doing it.

“I took to it like a duck to water,” he says. “I definitely found my calling.” He points out that, for a lot of people, getting a ride around San Francisco is not easy and that this is a way for him to give back. “It’s a wonderful feeling,” he says, “that I’m actually making a difference.”

At the end of my ride, Carter takes me back to Lyft headquarters and gives me a HipHopLyft business card. We fistbump, I step out, and off he rolls into the night.