Many critics of the sharing economy remain skeptical of one of the movement's core premises: that bikesharing, peer-to-peer accommodation rentals, clothing swaps, and the like represent a fundamental departure from consumer-capitalist business as usual. Instead, they posit the inverse. The high aims espoused by advocates of collaborative consumption, the critics argue, are nothing more than sheep's clothing for the same wolfish desires (for money, status, etc.) that fuel the economic status quo.

In other words, one of the central debates concerning the meaning of the sharing economy revolves around motivation. What do users of sharing services really want? A group of researchers from the Palo Alto Research Center, Penn State, and UC Santa Cruz recently posed this question in "A Muddle of Models of Motivation for Using Peer-to-Peer Economy Systems," which they will present before the upcoming CHI 2015 conference on human computer interaction. Through a series of interviews with peer-to-peer (P2P) service users and providers, the report's authors–Victoria Bellotti, Alexander Ambard, Daniel Turner, Christina Gossmann, Kamila Demková, and John M. Carroll–uncovered a notable mismatch between users' expressed motivations and providers' understanding of the same. 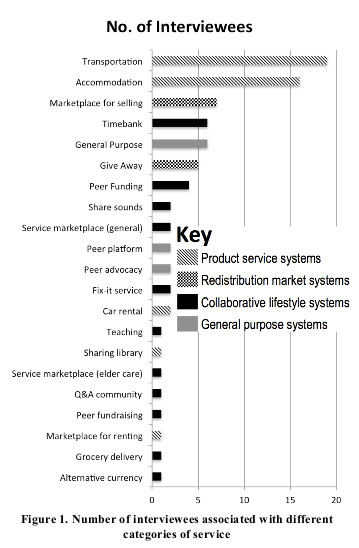 The first of its kind to capture the P2P service provider's point of view, the study was grounded in 68 "semi-structured" interviews with users and providers representing 43 different services, including both for-profit and non-profit organizations. The user group of 45 individuals included those at both ends of the exchange (accommodation-rental hosts, for instance, as well as renters). The researchers pulled relevant quotes from the transcribed interviews, then coded them according to the source's role in the P2P system and the "psychological root" of the motivation expressed. These psychological categories (of which more than one could be assigned to each quote) included value/morality, social influence, status/power, empathetic/altruistic, social connection, intrinsic/autotelic, safety, and instrumental.

The results suggest that users' primary motivations for entering the P2P marketplace are not what providers believe them to be—nor are they what P2P platforms are designed to highlight. Both for-profit and non-profit providers most often ascribed motives classed as "society/community/utopia" (within the broader category of value/morality) to their target customers. Yet the customers themselves cited more material concerns. User-providers, such as individuals renting their personal vehicles via a P2P carsharing service, were most strongly motivated by financial gain ("payment"). User-receivers, meanwhile, most often cited "getting a service/thing" or "increasing value" as motivating factors. 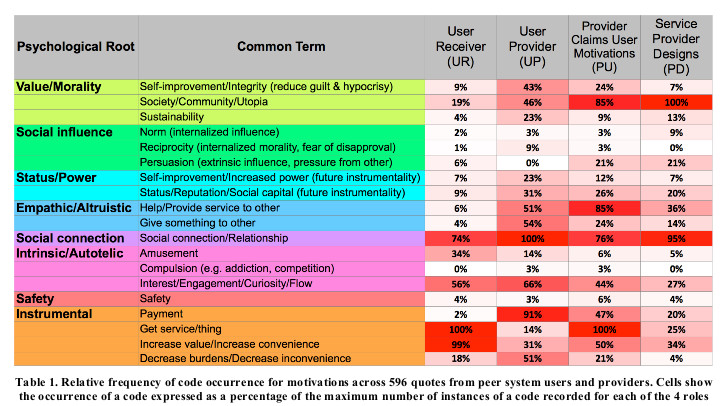 The results evidence a mismatch between users' motivations and providers' understanding of the same. (Bellotti et al., "A Muddle of Models of Motivation for Using Peer-to-Peer Economy Systems")

The researchers did find several points of full or partial agreement among sharing service providers and users. Both P2P providers and users frequently articulated motivations within the "social connection" category. (This was especially true for providers and users of the non-profit organizations and/or companies that offer "altruistic" rather than "instrumental" rewards for participation.) In addition, the interview data suggests that users (both user-providers and user-receivers) are motivated by high-level concerns. Unlike in the providers' conception, however, these tend toward the personal rather than the universal: moral self-improvement, for example, in place of contributing to a more moral society.

The researchers suggest design implications corresponding to each finding. Most importantly, P2P systems should foreground how the service offered fulfills fundamental needs. "[W]hile users may resonate with the ideals of a more egalitarian, helpful, and sustainable world," they write, "a user's motivation to use a peer service will often hinge upon its ability to satisfy basic needs…more effectively than the competition."

So who is right: the sharing-economy promoter who suggests that the movement is about creating a better world; or the sharing-economy critic who maintains that the new model is plain-old consumerism dressed in politically-correct clothes? According to the above, both perspectives contain at least a grain of truth. For advocates of collaborative consumption (and the report's authors place themselves squarely in this camp), perhaps the most important lesson the study offers is that the disconnect between service providers and users only fuels the pessimists—and may endanger the long-term prospects of the sharing economy. In the researchers' words: "a muddle of models will remain in play unless providers embrace what really motivates users." 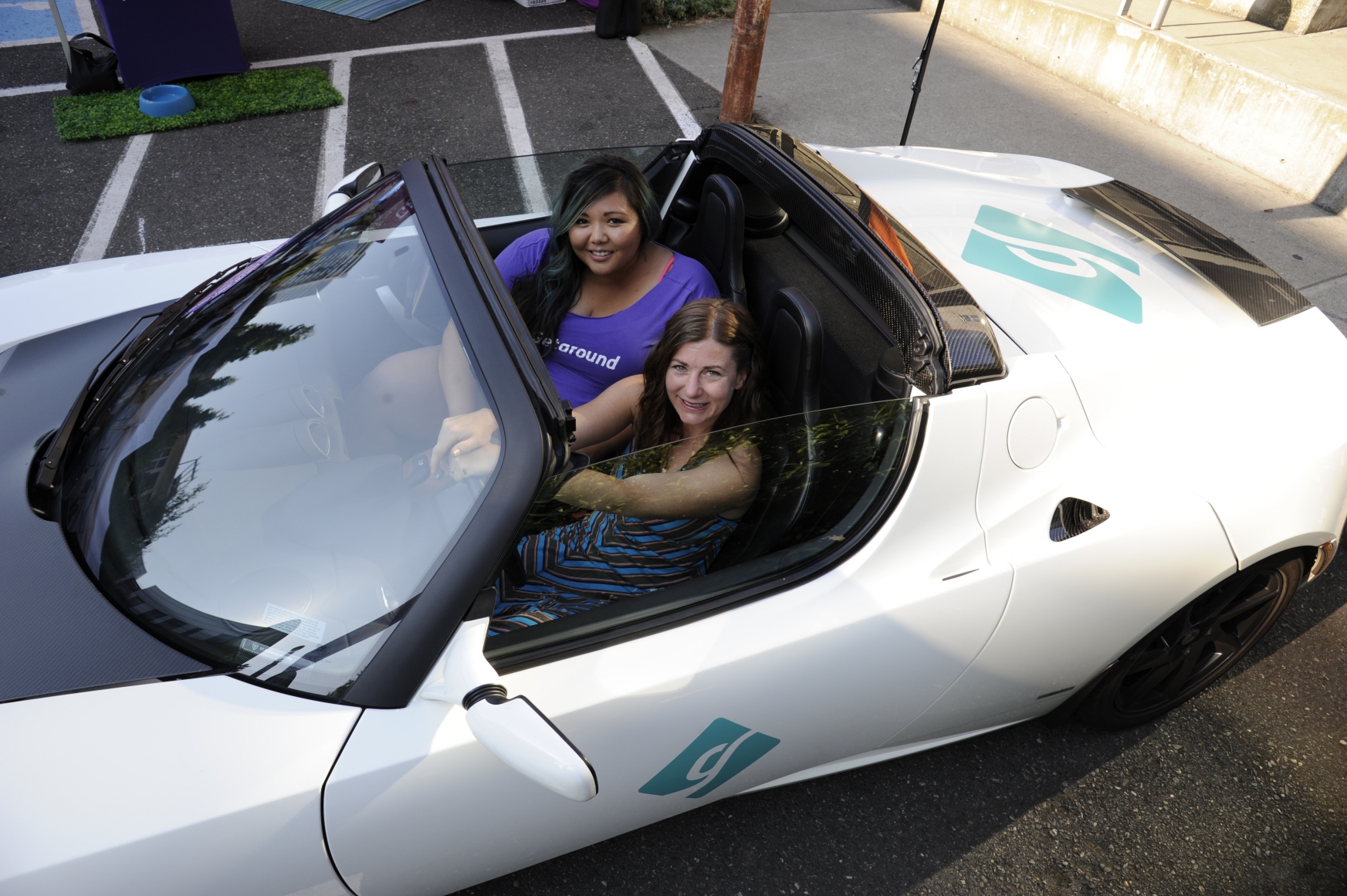