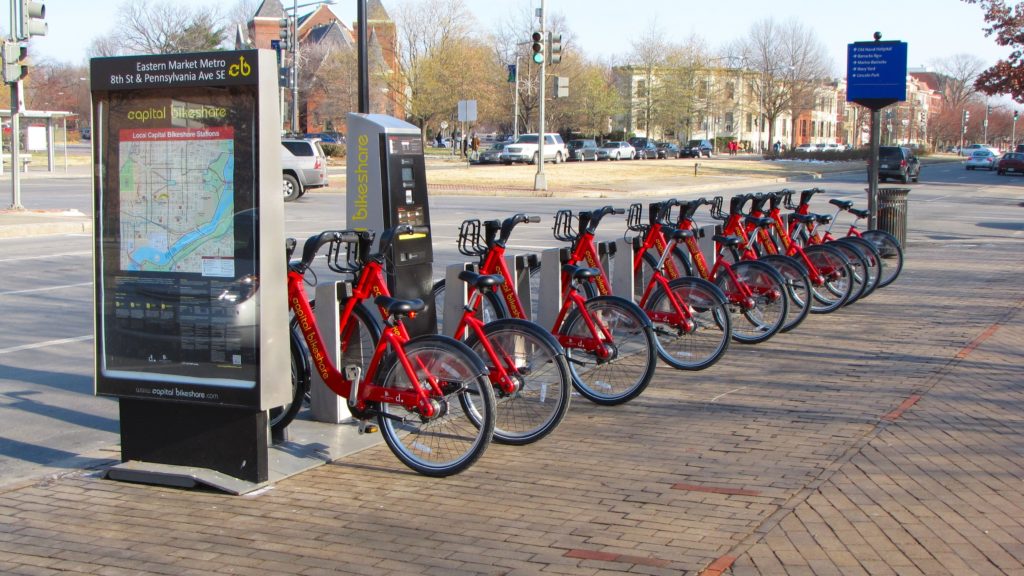 As business in the for-profit sharing sector booms—see Uber’s February 2015 valuation at $41.2 billion—executives helming conventional organizations in the auto, retail, hospitality, and other industries grow increasingly nervous. Revenue-generating sharing services appear to be here to stay, leaving existing businesses with a choice between adaptation or a reduced bottom line. A new report from PricewaterhouseCoopers (PwC) aims to provide some clarity to company leaders grappling with the implications of the sharing trend. Based on a consumer survey, interviews with sharing economy experts and business executives, and social media analyses, the document provides an overview of the for-profit sharing economy and its users, and offers industry-specific advice to concerned parties.

Significantly, the PwC report defines the sharing economy explicitly in terms of profit generation: “Sharing economies allow individuals and groups to make money from underused assets.” Thus its findings are unlikely to directly reflect or apply to the experience of providers and users of extra-market services, such as toy swaps or tool libraries. The report’s authors further limited their focus to four industries: automotive; retail; hospitality; and entertainment, media, and communications. 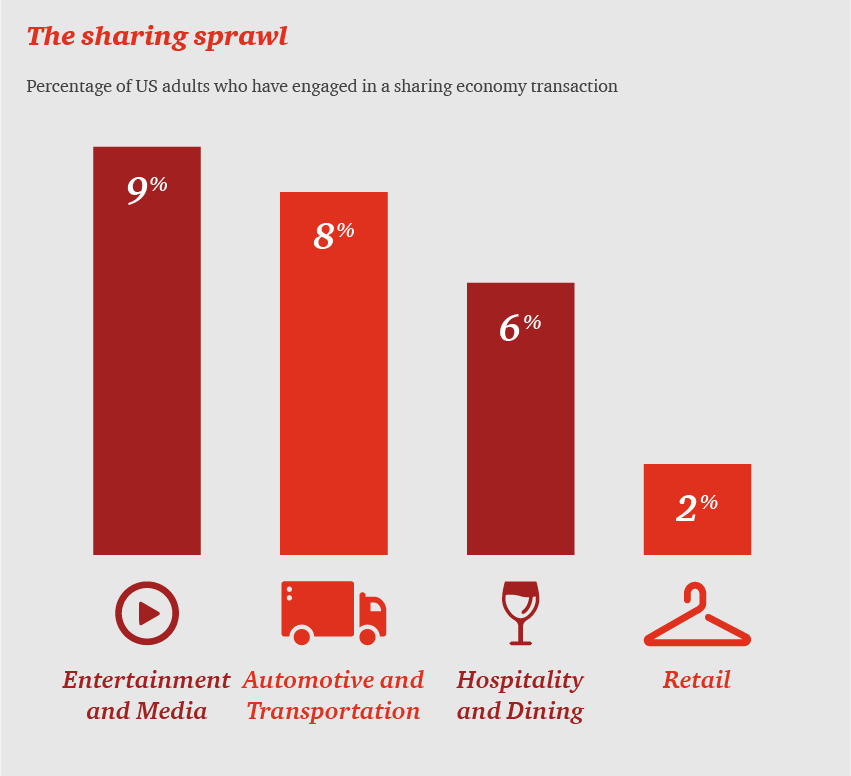 The report’s basic findings largely confirm what we already know about the for-profit sharing sector. Of 1,000 consumers who completed an online survey, 44% indicated some familiarity with the sharing economy. Nineteen percent of respondents had engaged in a sharing transaction (including, per the report’s definition of the sharing economy, using music or media services like Wix and Spotify), 7% as providers. The demographic groups “most excited about” the sharing economy after trying it included 18- to 24-year-olds, households with annual incomes between $50,000 and $75,000, and families with children under 18. The benefits participants associated with the sharing economy included affordability (86% agreed), convenience and efficiency (83%), building community (78%) and better environmental impact (76%). (These numbers are for only those respondents indicating familiarity with sharing services.) 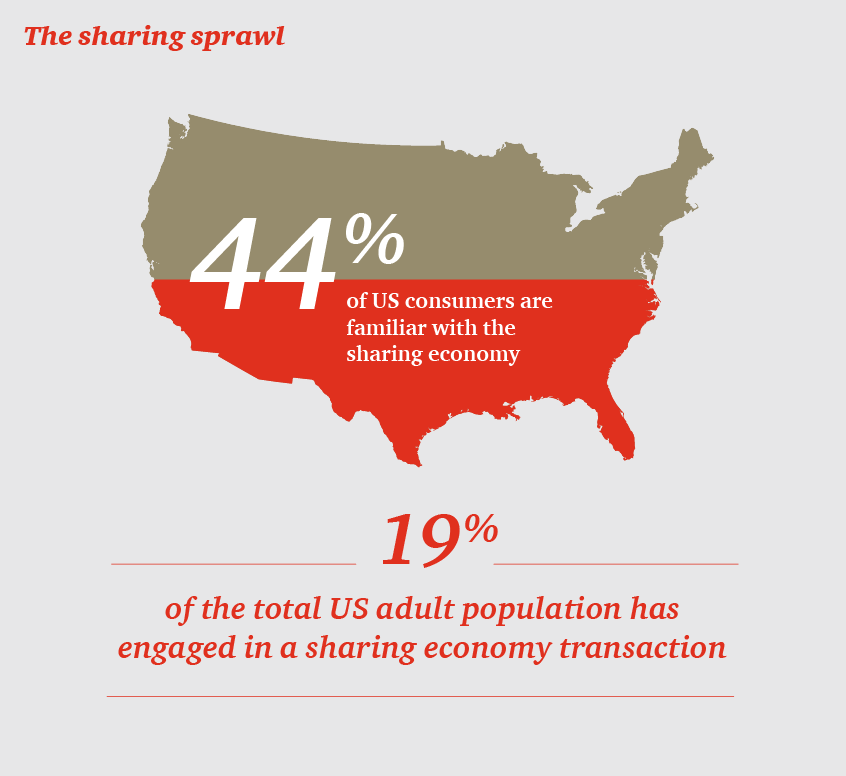 Just under half of consumers surveyed indicated familiarity with the for-profit sharing economy. (PwC)

The authors of the PwC report point to changing attitudes toward ownership as both cause and effect of the growth of the market-oriented sharing economy. The shift away from ownership as status symbol and toward the flexibility engendered by borrowing or renting is especially pronounced among adults between the ages of 18 and 24, who were twice as likely as older consumers to agree that “access is the new ownership.” Of respondents familiar with the sharing sector, 81% agreed that sharing is less expensive than owning, and 43% affirmed that “owning today feels like a burden.”

As a result of the above, the report argues, consumer purchase behavior is changing, especially with respect to big-ticket items like cars and high-end clothing. For retailers, this is both bad and good news. On the one hand, the combination of a revised attitude toward ownership and the continued effects of the economic downtown may discourage potential customers (especially younger adults) from making purchases. On the other hand, the “access over ownership” trend also attaches a higher value to quality, both because upscale experiences can give providers an edge in the sharing market, and because durable goods are more likely to survive regular reuse or resale. Thus an Uber driver might invest in a nicer vehicle than she would purchase for personal use, or the operator of a clothes-rental program might stock up on (harder-to-come-by, durable) designer items rather than (ubiquitous, flimsy) “cheap chic” apparel. 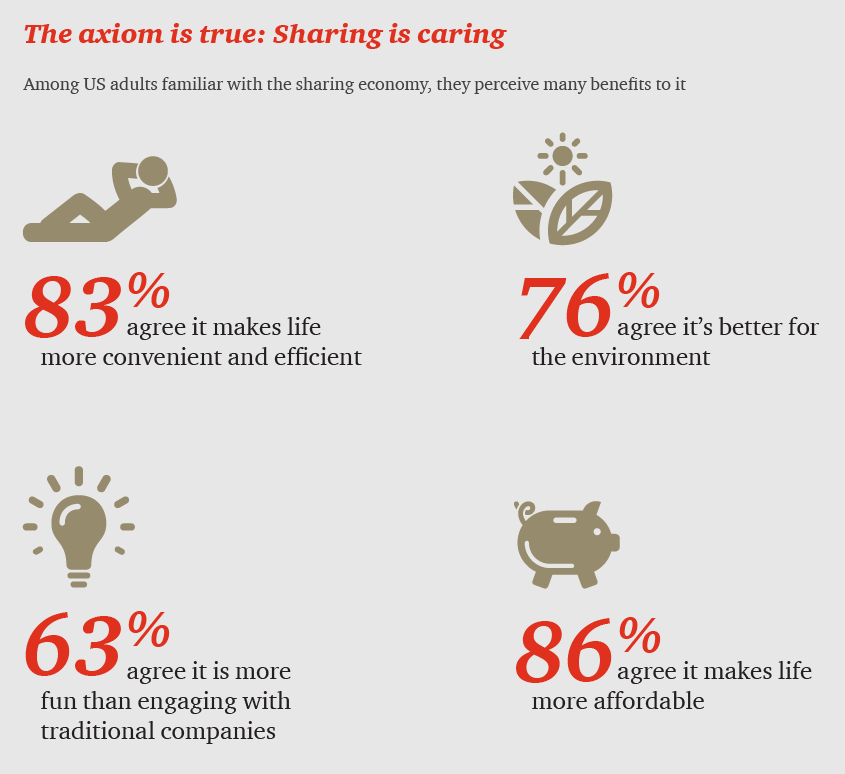 The authors of the PwC report also focus on the role of trust in the sharing economy. While only 29% of survey respondents said that they trust their peers more today than in the past, 64% indicated that peer regulation is more important than government regulation in the sharing economy. That is, while trust in individuals may not be growing, trust in the aggregate—in peer review systems—is up. This has a couple of implications for companies investing in the sharing economy. First, to maintain faith in peer regulation, for-profit sharing businesses must find ways to verify consumers’ identities without placing too much of a burden on users. Second, companies should recognize that the sharing economy’s emphasis on social relationships exists in a balance with consumers’ desires for convenience and affordability. “So while the intimacy of peer-to-peer interaction can be a benefit . . . there are limitations and boundaries that need to be discerned,” write the report’s authors.

Whether the services the PwC report focuses on should be considered part of the “real” sharing economy is debatable. Yet the very existence of this document evidences the power of the sharing movement. Executives are concerned that if they do not ride the sharing wave, they will be submerged during the transition to a new economic paradigm. New York University Stern School of Business professor Arun Sundarajan compared the potential transformation to the change wrought by the mass production of personal automobiles. “The way we lived, the way we consumed, this whole ownership economy[,] much of it emerged out of driving our cars,” he said. “We built a big house in the suburbs, we moved there, we acquired stuff. The direction of change here is probably different, but its comparable in how profound it was and the societal implications.”