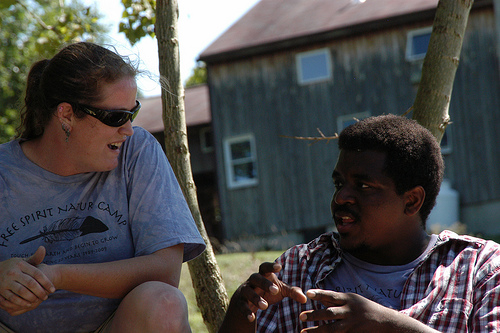 Truth, as the oft-told parable of the blind men and the elephant reminds us, is a matter of perspective. Ann discovered this when she was assigned to work with Warren, an ex-military guy who had a 3' x 4' poster on his office wall of Adolf Hitler giving the Nazi salute. The slogan below the Swastika read, “Don’t let them take away your right to bear arms.” And in small print at the very bottom of the poster were the words, “New York Jews for The Right to Bear Arms.”

As it happened, Ann was a New York Jew who had recently relocated to the Southwest. She sets the scene: “This wasn’t some garage where guys hung up dirty pictures of girls. This was a government agency.” Warren didn’t understand why she was upset. “He pointed to bottom of the poster,” she recalls, “and said to me in all seriousness, ‘Look. New York Jews.’ He actually believed there was such a group. A few days later, he gave me 40 pages of xeroxed literature to read. In his eyes, the poster was about the right to bear arms and had nothing to do with Hitler. He was a gun advocate.” He never took it down.

“In human societies,” the Dalai Lama reminds us, “there will always be differences of views and interests. But the reality of today is that we are all interdependent and have to co-exist on this small planet. Therefore, the only sensible and intelligent way of resolving differences and classes of interest, whether between individuals or nations, is through dialogue.” 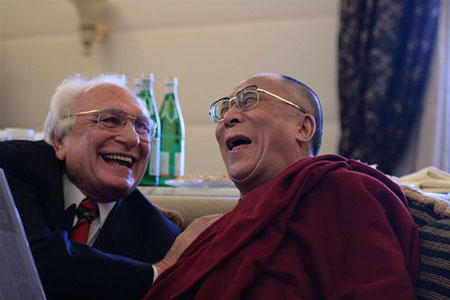 The problem is, when two people have conflicting views, dialogue is not only compromised by having different perspectives; other factors – some just on the edges of our consciousness – also come into play.

We don’t have much practice. Psychologists and sociologists cite the principle of homophily – literally, love of same – to explain why we tend to seek out and cluster with “our own kind.” One review of over a hundred studies showed this phenomenon in “network ties of every type, including marriage, friendship, work, advice, support, information transfer, exchange, co-membership, and other types of relationship.” But by conversing only with people who think like we do, we lose valuable opportunities to broaden our minds.

We fail to realize that the other person might be as mystified – or frustrated – as we are. When we only see a person as a representative of an unfamiliar group that we are predisposed not to like, we assume we have nothing in common. Thomas Merton, Trappist monk, poet, and social activist, cautions us to rethink that position:

Our default mode is snap judgment. We’re all amateur profilers. Princeton researchers Janine Willis and Alexander Toderov found that it took people a tenth of a second to judge a stranger. Other studies suggest that we then build on those initial impressions. “The first information we encounter has an unduly large influence on what follows,” says psychologist Sam Gosling, author of Snoop: What Your Stuff Says About You. When people are given the exact same six-word descriptions of an imaginary person and asked to form an impression on the basis of those words, just changing the order of the words by leading either with positive or negative terms, Gosling reports, “The first word anchored the description and colored how they interpreted the rest of the words.” 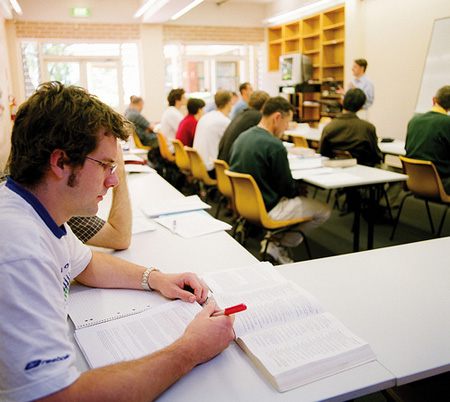 We don’t give some relationships a chance. Students in a college communications class were paired off with a stranger and asked by psychologist Michael Sunnafrank to predict how they thought they’d feel about the person at the end of the semester. And guess what? They were always right – more accurately, they made themselves right. The student partners had time to change their minds and to get to know the other person over the course of the semester, but if their first take was negative, they didn’t even try. Sunnefrank, father of “predicted outcome value theory,” maintains that the more valuable we initially perceive another person to be, the more we’ll work toward greater intimacy. In short, snap judgments have legs.

We exhaust ourselves in the presence of someone who’s different. Psychologist Jennifer Richeson has done a series of studies demonstrating the cognitive “costs” of relating to people who are different. When white subjects, for example, are paired with black investigators, they perform more poorly on the Stroop – a widely used test of reaction time – than when paired with white investigators. Her theory is that when we are put in social situations with someone who is different, our ability to focus and concentrate is compromised because we’re trying so hard to seem “fair” and “open” and to avoid appearing prejudiced. Such interactions require heightened self-control, and we are sapped by the experience.

We’re not good listeners. We spend 70 to 80 of our waking hours in some form of communication – of which 9% is spent on writing, 16% reading, 30 % speaking, and 45 % listening. And, yet, we typically use 25% of our brain when listening. Listening is hard work; it takes tremendous energy to stay focused. One reason is that the brain processes words at a higher rate than the average person can speak. So when you’re listening, the other 75% of the brain can get quite busy and drown out the other person’s words. Also, we are taught other communication skills, but few ever take a “listening” class. Thus, on a good day, we retain between 25 and 50% of what we’ve heard, half that two weeks later. Listening is even harder with someone who’s different from you. You might become emotional, critical of the speaker, reactive to his words, or tune him out altogether. You sit there planning what you want to say next – in which case you’ll retain only 2 to 10% of what you’ve heard. 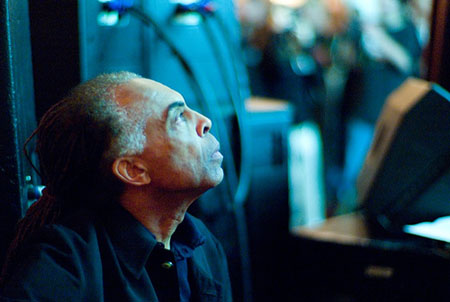 We rely too much on primitive and unconscious brain functions. We miss a lot of relational opportunities when we don’t see others as complex beings. In On Second Thought: Outsmarting Your Mind’s Hard-Wired Habits, Wray Herbert looks at the limitations of heuristic thinking which are “cognitive rules of thumb, hard-wired mental shortcuts that everyone uses every day in routine decision-making and judgment.” Many of these brain functions are throwbacks to earlier times when our ancestors had to make quick choices or die. Such thinking can still benefit us – for example, when confronted by numerous choices in a supermarket aisle. But in relationships, we need to leave room for deliberation. Otherwise, we risk misjudging others and making wrong-headed decisions based on bad information.

Our ancestors' lives also depended on the ability to distinguish between “us” and “them,” says Harvard scholar Mahzarin Banaji, who helped conceive the “implicit association test.” The test was designed to shed light on hidden attitudes that get in the way of honest conversation when it comes to gender, ethnicity, sexuality, body type, disability, and age. If you think you’re unbiased, take the IAT. Six million already have, and the results are sobering. Most Americans, for example, show a preference for white over black, young over old. Banaji stresses, “We have a lot to work against: many millions of years as our species, as well as societal stereotypes, and our own experience as individuals.”

The good news is that we can. “The best way to rein in bad thinking is to recognize it,” says Herbert. “ Because once we recognize faulty thinking, we are capable of talking ourselves into better thinking.” As we will explore in Part 3 of this series, we can co-create a different reality, one in which we achieve, at the very least, mutual understanding, empathy, and respect – universal values that transcend ideology.

Ann, for one, had to accept that Warren’s “truth” was different from hers. When he retired, she wrote on his card that she’d enjoyed working with him. “I couldn’t resist adding ‘but that Hitler poster was a bit much for me to handle!’ By then, though, the emotional charge was gone, and I was actually able to joke about it. As it turned out, he was a decent guy.”