"Why Are You Taking a Picture Here?" - Shareable
Skip to content 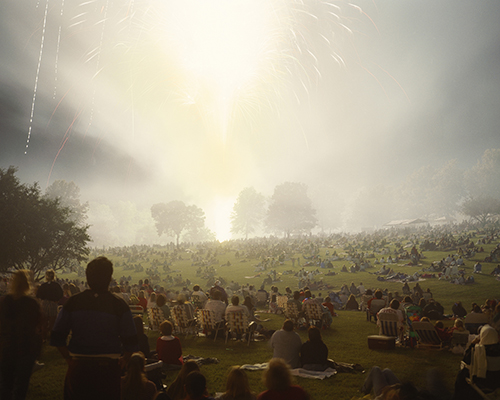 I stumbled across the photography of Mike Sinclair while researching images for a Shareable.net article on public spaces. After combing through dozens of pictures of Roman piazzas and English village greens, I was impressed by the vividly American quality of Sinclair's gathering places.

Sinclair lives in Kansas City, Missouri, and he says that his photos specifically embody a "Midwestern sensibility," even (perhaps especially?) when he's shooting a crowd in Manhattan. To my eyes, this involves a certain polite distance from his subjects; a constant awareness of isolation as well as a yearning for connection; and a sense of rootedness that only accidentally eradicates pretension. In short, the tension in these photographs arises from their ambivalence about sharing, a tug-of-war between the public and the private that Sinclair repeatedly mentions in the captions below.

The Midwestern sensibility also shows up in his choice of subject: While pictures of European public spaces tend to emphasize their cigarette-smoking elegance, Sinclair photographs people who could be your parents or grandparents visiting state fairs, Memorial day celebrations, and basketball games. Many of his pictures have no people at all, and yet the objects he photographs – such as the championship Dahlias below – represent the ways, from frivolous to serious, we can come together for community or common purpose.

I invited Sinclair to share his photographs with Shareable.net's readers, and to meditate on the nature of America's shareable spaces.  – Jeremy Adam Smith, Editor 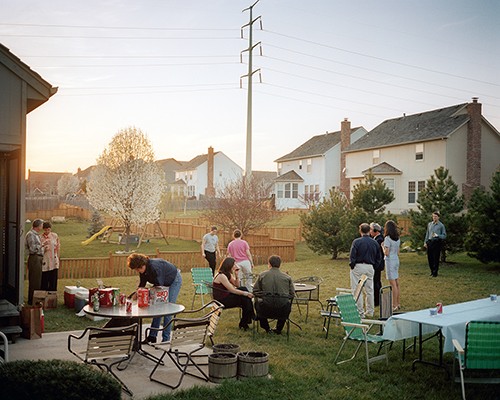 Some things have changed since I took this picture of my friend’s wedding reception for their daughter. The marriage being celebrated has dissolved, the trees have grown taller and more of the yards have fences. When they moved into this neighborhood there were no fences, the trees were fewer and smaller. It looked like a domesticated version of the tall grass prairie ranch-land you find a hundred miles to the west. Here in these suburban backyards Kansas’ historic battle between an open range and a fenced one is still going on. It’s human nature to give where we live our own stamp. We plant trees to block the view of the house across the way that looks almost exactly like ours. We need shade by the patio. Our kids and dogs need to be contained, or some want a barrier to keeps those kids and dogs out. We are always looking for our proper balance between the public and the private. 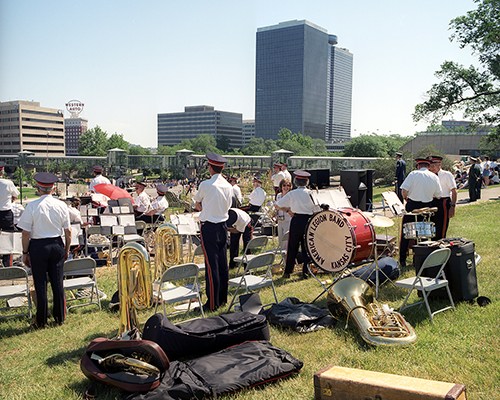 When I took this picture at a Memorial Day celebration I was learning to play the clarinet again. I’d played in grade school and part of high school but had just recently taken it up once more. There was something about seeing this band relaxing before playing its next piece that made me, for a moment, wish I would become good enough to play with them. To play a Sousa march and wear a uniform not too different from those worn when Sousa was still conducting a hundred years ago seemed (and still does) like a most pleasant way to spend a national holiday. 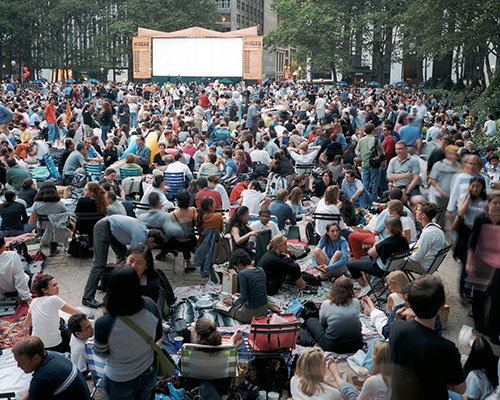 My notes from when I took this picture, at New York City’s Bryant Park, remind me that the movie all these young people are waiting to see was The Graduate. I remember seing it when it first came out in 1967. It was a protest movie – of sorts – for my generation. Reminding us that like the movie’s anti-hero Benjamin, played by Dustin Hoffman, even if we didn’t know what to do with our lives we knew we didn’t want to become our parents. Now, some thirty years later, I don’t think it was that message on nonconformity that drew this crowd. More probably it was the chance to be outside on a lovely summer night, sharing a meal with friends and celebrating the good fortune of being young and living in such a great city. 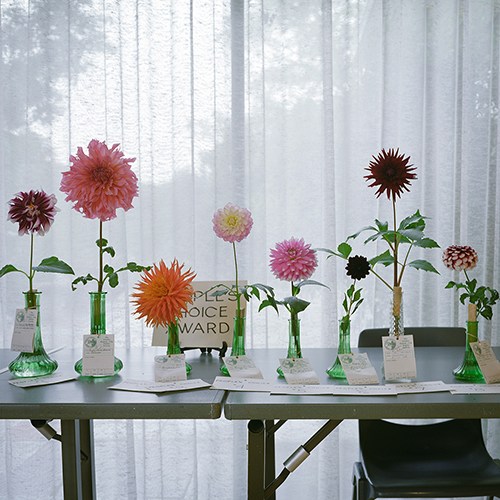 I’m a sucker for contests – cake baking, the best ear of corn or, in this case, Dahlias. They are quite popular at the state and county fairs I like to attend. This picture shows winners of “The People’s Choice Award” (you can see the sign hiding behind the flowers just to the left of center). Part of an annual show by Kansas City’s Dahlia Society, these eight specimens were selected by popular vote, not by dahlia experts – anyone who came to see the show could vote. I remember I didn’t vote; choosing one flower from the hundreds on display seemed impossible. Just look at these eight, how could you pick a favorite when each one is so different? Also, I get distracted by the paperwork around their bases and the very pedestrian, if not plain ugly, vases they’re in. But using ugly vases seems common in these competitions. I’m always surprised when I visit the Iowa State Fair, probably the most celebrated fair in the country, that Championship flowers are always displayed in brown beer bottles. It’s like a midwestern concept of yin yang. 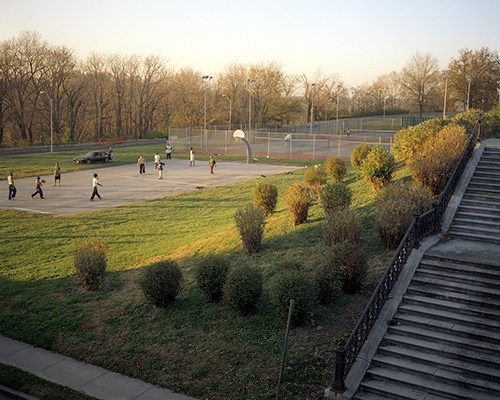 I sometimes wonder when I look at a picture like this why I took it from so far away. Truth is, I’m shy, and it’s a comfortable distance for me. If that’s a liability – and it can be for a photographer – I’ve tried to make the best of it. From a distance I can study the action without having much impact on it, letting me work at the slow pace I enjoy. Sometimes I also wonder if I wouldn’t have been better suited being a painter. A painter friend who always works from direct observation, sets up his easel each day at the same location for the two or three months it will take him to complete a painting. The attention he get is all positive. It’s not unusual for him to have several visitors come up to chat during a session, it seems so civilized. People are more suspicious of photographers and the questions I’m asked are more demanding, like “Why are you taking a picture here?” Or if I’m on private property they simply tell me to leave! And I’m sure my own reaction would be the same. If a painter set up his easel in front of my house I’d be flattered but if a photographer began setting up a tripod I’d go out and ask why. 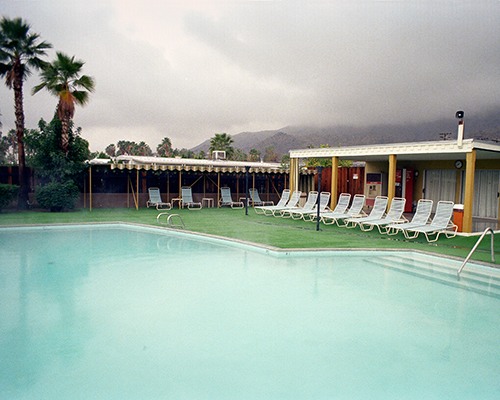 One of the things photography has been successful at is recording the exotic. From Felice Beato’s first photographs of East Asia in the 1850s to the astronaut photos taken on the surface of the moon, photographs excite us about a land outside our everyday vision. This picture was taken during my first trip to California. I was in my 20s and on a cross-country drive delivering a very temperamental MG from Kansas City to Los Angeles. I was only in Palm Springs overnight but it seemed like every motel from the cheapest to the most expense had these heated pools. It was winter, and if water had been left in a pool in Kansas City its only use would be as a skating rink. The morning I left I took this photo. Steam off the pool, palm trees, mountains in the distance – together with easy access to leisure afforded by the orderly-arranged chaise lounges all added up to a very exotic scene to this young midwesterner.

This is part one; here's part two.

Mike Sinclair is an architectural and fine art photographer living in Kansas City, Missouri. His photographs are frequently published in the architectural press and elsewhere, including The New York Times,

Mike Sinclair is an architectural and fine art photographer living in Kansas City, Missouri. His photographs are frequently published in the architectural press and elsewhere, including The New York Times, Metropolis, Architectural Record, and Interior Design. His work is in several public and private collections, including The Museum of Fine Arts, Houston, The Kemper Museum of Contemporary Art, Kansas City and the Nelson-Atkins Museum of Art, also in Kansas City. Limited editions of some of the photographs from this series are available at www.20x200.com