What steps can be taken to ensure the well-being of gig workers? - Shareable
Skip to content 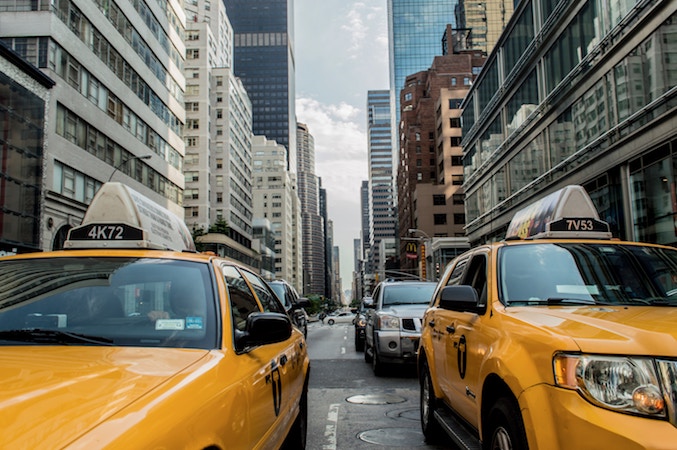 In early February, Doug Schifter, a longtime taxi driver committed suicide in front of City Hall in New York City, New York. Just hours before taking his life, he posted a lengthy message on Facebook outlining his work stress, lack of health insurance, and financial challenges. Schifter's note shone a light on a problem that has been brewing for some time with the proliferation of the gig economy. The growth of ride-sharing platforms that promote gig work is putting drivers — those who work at ride-sharing companies and those whose work is decimated as a result of the rise of ride-hailing enterprises — at risk for an array of health problems. That's according to MaryGrace DeCotiis, the organizing director at the Independent Driver's Guild (IDG), a Machinists Union affiliate that represents over 60,000 for-hire drivers in New York City.

"This financial ruin is rightfully getting to drivers, and making it hard for them to survive and provide for their families, and that leads them to develop various types of depression and other mental illnesses," DeCotiis says.

She says her group has seen well-being and health concerns among its members for years. She believes it's a serious problem that's not well understood.

"We come in contact with hundreds of drivers a week in person, and every single driver has the same story," DeCotiis says. "'I can't make as much money as I used to,' or 'I signed up, I have a 70,000 dollar investment into a vehicle, and now I got fired from Uber two weeks after I started to work.'"

It's a widespread, global problem. The Institution of Occupational Safety and Health (IOSH), a United Kingdom-based chartered professional body for safety and health in the workplace with over 46,000 members in 120 countries, recently conducted a survey to better understand how the gig economy impacts workers. It found that many work when they're sick, have unpaid overtime, and sometimes go an entire year without a single paid holiday. Tim Walsh, a spokesperson at IOSH, says the organization hopes this data calls for stronger protections.

"IOSH wants consistency in the ways that employers look after those working for them. People working in the gig economy deserve the same level of protection as those in permanent contracts," Walsh says. "They are exposed to the same risks, and they deserve for their health, safety, and well-being to be looked after."

While many factors are in play with why many taxi and ride-hailing platform drivers across the world are facing health and safety challenges, IDG points to one overarching cause — low pay. "Drivers have to invest so much in their vehicles," DeCotiis says. "If there is a drop in rates, if they get deactivated, they are at a place where they cannot meet their bills."

Inadequate wages are a serious problem. A working paper released by Massachusetts Institute of Technology's Center for Energy and Environmental Policy Research found that the average Uber and Lyft driver in the United States makes between $8.55 and $10 an hour once costs, such as insurance, maintenance, repairs, and fuel, are factored in. Moreover, for 41 to 54 percent of drivers, the profit per hour they earn is less than the minimum wage in the state where they operate, the paper's author noted.

"We need pay regulation," DeCotiis says. "Uber and these companies can cut rates whenever they want to do. We want to bring rates up and have that pay regulated and protected."

IDG is also working to expand the services it provides drivers. It has been offering a wellness class through the Black Car Safety Center, which is open to all of its members who are paid to attend. The class covers stress management, self care, and other health-related skills, such as how to administer CPR. DeCotiis says they hope to do more in the future, especially around mental health.

"Mental health is already so stigmatized, just as a whole," DeCotiis says. "We want to figure out ways about how to talk about this, and find outlets for people to use to get hooked up with mental health professionals as quickly as possible."

The response from Uber has been tenuous. While the company is now limiting work shifts to 12 hours with a six-hour break in-between shifts, it still classifies workers as contractors and is fighting to keep things that way, which by nature limits the type of benefits and services they receive. That is why IDG believes that it is up to policymakers to begin recognizing that gig platforms are a health and workplace safety issue, and pass laws to protect drivers, including limiting the entry of new drivers, and ensuring those with licenses can earn a living wage. Otherwise, things will only get worse.

"I think we're only scratching the surface right now on how widespread this problem actually is," DeCotiis says. "We're taking it very seriously because, although we are fighting for long term policy changes, and benefits… people need some help now."