What Makes Cities Good for Freelancers? - Shareable
Skip to content 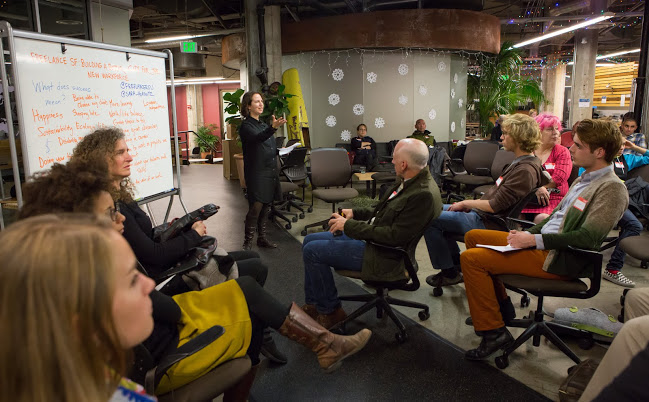 Called Freelance SF: Building a Better City for the New Workforce, the event was led by the founder and executive director of Freelancer's Union, Sara Horowitz. About 40 people attended, contributing a diversity of voices to a lively conversation about needs and wants of the freelancer community.

The two main questions of the evening were:

After a brief introduction in which Horowitz talked about freelancing as the burgeoning new workforce, people broke out into small groups to discuss the questions. “Reporters” from each group then presented their answers to the room at large, showcasing a variety of ideas with clear overlaps.

The consensus was that though San Francisco is a great place for freelancing in its potential for connection, collaboration, and networking, the bay area's high cost of living presents a big challenge. Another challenge is the lack of legal protections and benefits that freelancers face nationwide. In order to make any city freelancer-friendly, rights and laws need to be put in place – laws about minimum wages, for examples, or granting freelancers access to the same benefits as salaried employees.

Freelancer's Union's recently unveilved national benefits platform and plans to open 15 health centers gives freelancers a leg up they didn't have before, but they still feel they aren't offered the same protections as company employees. Employees of any company also get a built-in perk that is harder to come by in the world of freelancing: connectivity and sharing.

Though freelancing can be an independent lifestyle, it can also be isolating. Long hours of work done alone can mean long hours without much social connection. Which is a large part of why both Freelancer's Union in general, and this event specifically, exists – to bring freelancers together, both socially and to sharing knowledge and work.

“This is the new work force,” Harowitz commented. “There are 53 million American freelancers. You just have to be connected. The most successful freelancers are the ones with the most robust networks, the ones that know how to share.”

In September, Freelancer's Union set up Hives, a social network for freelancers, with the intention of promoting sharing. They also host “after hours” events – social events, often in a co-working space, specifically for freelancers.

A second Building Better Cities event will be held on December 10 in Los Angeles. These evenings are only the beginning of a conversation about freelancing and freelancer's rights, says Horowitz, who greatly emphasized the importance of the changing nature of the American workforce. With 1 in 3 Americans freelancing, a union 250,000 members strong and growing, and freelancing becoming ever more popular as a viable livelihood, it's time to have in-depth discussions about the type of world freelancers would like to live and work in.

“Every time we have a huge transformation in the way we work, it gives us the ability to ask, how should we define work?"  Said Horowitz.  "The future of the workforce is now here – so what do we want it to be?"