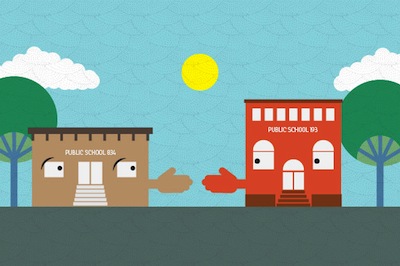 Last week we published a piece by Jay Walljasper entitled "How Tax-Sharing Can Save Cities," which made a moral and economic argument for richer areas funneling tax revenues to poorer ones. In the Twin Cities, for example, each of the 180 local municipalities contributes 37 percent on average of its commercial-industrial property tax revenues to a pool that is apportioned to communities on the basis of financial need.

"The center cities and lower income suburbs in Twin Cities region draw on these funds to bolster schools and public services, which explains why you don’t see any shocking differences passing from a blue-collar community to an upscale one," writes Jay.

This morning I spotted a brief essay by Paul Tullis on the GOOD website that takes this idea one step further and applies it specifically to education:

The Los Angeles Unified School District, like pretty much all school districts in the United States, gets a significant portion of its funding from property taxes…

Our country’s school funding mechanism is a recipe for educational inequality, which perpetuates and broadens asset inequality. The wealthiest school districts, where parents are more likely to have good educations and to be able to afford to send their children to private school, get the best public schools, while the poorest parts of the country—whose residents need a good education the most—get stuck with least funded schools…

But what if the school funding situation were reversed? Say there are 100 schools in a district. What if the wealthiest neighborhood funded the school in the poorest one, and vice versa. No. 2 would pay for no. 98, and no. 98 for no. 2, and so on. What would happen if property taxes from Bel Air paid for the schools in Watts?

….The incentive would be removed to buy into a wealthy neighborhood for its school; as a result, property values there would become more in line with the rest of the community and over time, enable less well-off families to also afford a home in that neighborhood. At the same time, middle-income families who can’t afford private school, but are willing to live in an edgy neighborhood for its well-funded school, would move in, bringing with them their strong emphasis on education, along with the money to invest in their home and their community—and thus raise property values in the poorer district. A leveling effect would develop, encouraging the intermingling of families from different socioeconomic backgrounds, while creating opportunity in neighborhoods where little had previously existed.

OK, in the current political climate, this proposal in its pure form has a snowball's chance in hell of happening. And yet I think Jay's essay reminds us that many towns already do take steps to share their wealth and raise everyone's quality of life.