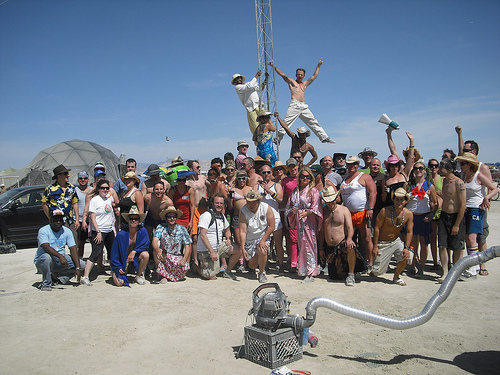 “How was your burn?”

That's the standard question one burner asks another once Burning Man is over. The question reflects how individual the experience can be—and how hard it is to summarize.

So how was my 2009 burn? Well, it pushed my buttons, kicked my ass, and was nothing short of amazing. I returned exhausted and inspired. I was most inspired by our camp, the Duckpond.

Burning Man’s theme this year was evolution—and together with Austrian cultural entrepreneur and friend, Eric Poettshacher (see photo to the right) of Shapeshifters.net, I sought to answer a question about how humans could overcome the fear of difference to reap the benefits of diversity.

Eric and I focused on a paradox: people are afraid of those who are different—and yet embracing difference is key to evolution. Whether genes or culture, change comes from combining things that have never been combined before.

To explore this question, we had planned to host a shamanic journey with an experienced shaman and participants from 12 different cultures at Burning Man. This proved too difficult to plan in advance across continents, so we decided to improvise on site. I went to Burning Man thinking that getting anywhere would be a struggle.

True to past experiences at Burning Man, if you’re clear about your intentions, somehow or another Burning Man responds. So getting an answer turned out to be easy. We found the answer next door, at a camp called Shaman Dome.

Shaman Dome hosted a series of talks by Michael Winkelman (that's him to your left), an anthropologist who had just retired from Arizona State University. Michael talked about how during a near extinction of the human race, our ancestors—who had been organized in small isolated groups—needed to connect outside their groups to survive. Apparently, our ancestors up to that point where much like chimpanzees in social organization—there is no exchange between chimpanzee groups except boundary maintenance and violence.

Michael’s theory is that shamanism and our ability to process psychoactive plants (toxic to other primates) were evolutionary adaptations that helped us overcome the fear of the other and become more effective in social integration. He sees shamanism—in which a member of the tribe mediates between the material world and the spiritual one—as a set of rituals that bond individuals into groups.

When Eric asked Michael how he would get two conflicting groups to come together, he didn’t hesitate. He said he wouldn’t allow them to talk to each other at first. They could only sing, dance, and drum together for a whole day before talking.

Michael’s message was loud and clear: Ritual, or shared experience, is an important if not primary means of social integration. In the context of Burning Man, which is a rich mélange of subcultures, this message had special resonance. For some, yes, Burning Man is just a gigantic party in the desert, but for me it’s an experience that increases empathy, bonds strangers  together, and gives you direct experience with the richness that diversity can offer.

Michael’s talks helped me see Burning Man in a new light. I had seen joining a camp as a means to an end, a way to make camping in the desert more comfortable. Pooling resources can get you conveniences like a shower, a kitchen, home cooked meals, and a shade structure that are impractical for an individual or small party to create.

But Michael’s talk and my experience with Duckpond totally reoriented me. The experience of planning the camp, packing the truck, executing our entertainment and meal plans on the playa, tearing down the camp, and unpacking the truck back in San Francisco were an inspiring and bonding shared experience.

Sure, it was a lot of work, but the feeling of accomplishment was palpable. We had a vision, realized it from beginning to end, and had a ton of fun doing it. My eyes well up when I think about how well this group of over 50 people—15 of whom were new to the camp, including me— worked together. We got an unbelievable amount of work done, sometimes in difficult conditions like dust storms, without it being too hard on anyone, with little to no griping. The work was made easy so became indistinguishable from fun, at least for me. 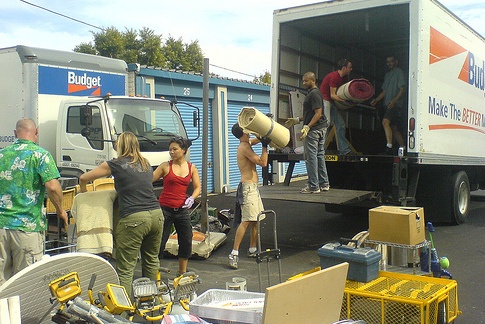 And people really went for it. The attitude that pervaded was not one of doing the minimum. I felt that many of our camp members saw Burning Man as a chance to give, and give with a big heart.  For instance, each night’s meal team did an amazing job. We had Thai, Jamaican, Peruvian, and BBQ themed meals for 50 that were just unbelievably delicious. At the Duckpond, Burning Man's Ten Principles came to life. 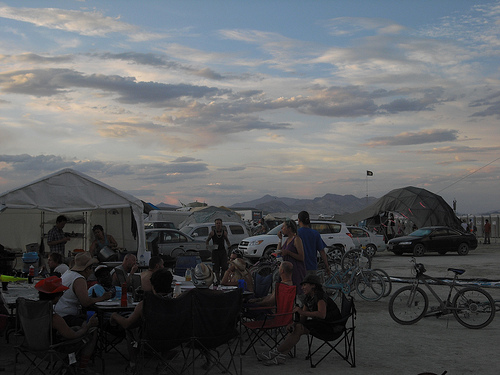 So Michael Winkelman’s answer to Eric’s question about how to bring different people together resonated strongly with me. That being said, the diversity in our camp had limits, we didn't bond wildly different people together. While our camp included people of color, gay men as well as folks from at least five countries, the majority of members were white professionals.

I had one other mission at this year’s Burning Man: to prepare myself to become a father. My wife Andrea and I are expecting a son in January. I’m nervous about parenthood for a lot of reasons, including tons of baggage from my own childhood, not to mention how hard and isolating it can be for anyone.

I needed to reorient myself. And so one evening I pedaled to The Temple, a beautiful structure made of scrap wood that people inscribe their deepest wishes and regrets, to meditate on becoming a father and inscribe something for our little family.

While looking for a pen on the second floor of the temple, I encountered an older man named Jan. He and I chatted for about an hour. We talked about fatherhood and life in general. He told me about his children, especially his eldest, a daughter who had insisted he come to Burning Man. He told me how he had changed careers from movies to farming. He talked about his plans to start an Internet service to help people share.

Jan was 70. He was full of energy, ideas, and plans. He was about my height and build. Later, perhaps romanticizing the encounter just a tad, I saw him as a future version of myself, still very much alive as an old man with my children adding richly to my life, taking me along on their adventures, opening the world to me instead of closing it.

In any case, Jan’s example inspired me. I could see myself in the future, succeeding as a dad, still dreaming, and still burning.