In its 26 years, the Burning Man arts festival has done more than just throw a big party in the desert: It has spawned a culture that extends far beyond the event's perimeter fence. At the center of this culture are what the Burning Man organization calls the Ten Principles – a list of concepts that define the most important elements of its philosophy. From Leave to Trace to Participation, Radical Self Reliance to Radical Inclusion, these principles are positive, actionable and easy to get behind. Over the years, many groups have done just that.

In fact, it's impossible to list here the hundreds of independent groups who are doing good work in the world, and naming Burning Man as an influence. Here are some of the biggest Burning Man related projects making a positive difference in the world – what can be done next? 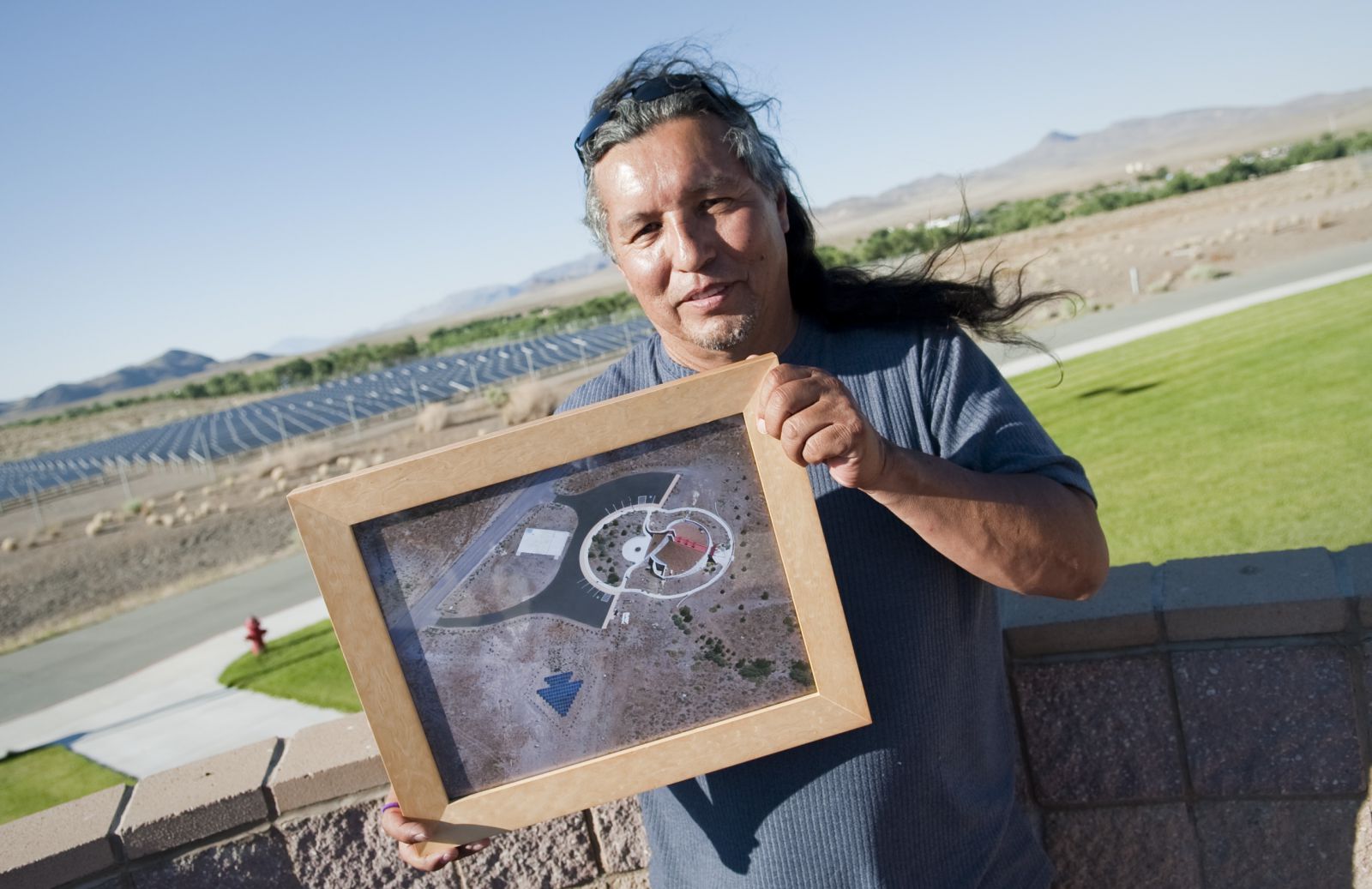 Ben Aleck, Director of the Pyramid Lake Paiute Tribal Museum, with a photo of the arrowhead-shaped array powering the museum. Photo by Marnee Benson.

In 2007, Burning Man chose an environmental theme for its festival, calling it the “Green Man”. A group of volunteers and employees installed a 30 kilowatt photovoltaic array on the desert floor to power the lights illuminating the eponymous effigy at night. After the event was over, the array was donated to the local school, and installed by a volunteer crew.

“Through a series of events and relationships, it became clear that there was an opportunity to keep giving back,” says Marian Goodell, Director of Business and Communications at Burning Man. Black Rock Solar was born. Tax breaks in Nevada made it possible for Black Rock Solar to install photovoltaic arrays at low or no cost for nonprofits, schools, communities and Native American tribes, many of whom would not otherwise be able to invest in renewable energy. Black Rock Solar took the opportunity to spread the principles of “Leave No Trace” and “Radical Self Reliance” by helping these communities become less reliant on conventional energy sources, lowering their utility bills in the process.

Five years later, Black Rock Solar has installed two megawatts of solar power throughout the state of Nevada. Nixon, Nevada – one of the towns closest to the site of the Burning Man festival, and the seat of the Pyramid Lake Paiute Tribe – may now have more distributed solar energy per capita than any other town in the United States. And in 2010, Nevada State Highway 447 was named “America's Solar Highway,” with more solar per mile than any other location largely thanks to Black Rock Solar's work.

When not installing photovoltaic arrays, Black Rock Solar focuses on education and art. It helped found GREENevada, a coalition working in environmental education for K-12 students. GREENevada's annual Student Sustainability Summit draws youths from across the state to compete for tens of thousands of dollars earmarked to help them “green” their campuses. Black Rock Solar offers job training and internships to tribal members and college students, helping them improve their job prospects. And it provides grants to artists working with renewable energy. 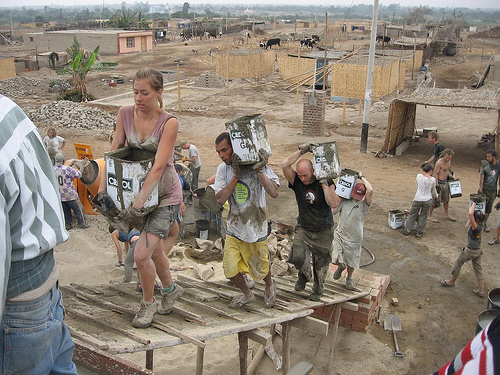 Volunteers build a school in Peru.

The 2005 Burning Man festival was in full swing when Hurricane Katrina hit New Orleans. Before the festival was finished, scores of attendees were already on their way to Louisiana. One of them was Carmen Mauk.

“I thought I would be down there for two weeks,” Mauk says. But the longer she stayed, the more deeply she became involved. A group of Burners congregated in Mississippi, some of them bringing heavy equipment. Calling themselves Burners Without Borders, they set about cleaning up the unincorporated township of Pearlington, Mississippi – ultimately providing over $1 million worth of disaster relief services to a community that was under the major relief organizations' radar.

“We weren't saying, 'We must bring the Ten Principles here to Katrina,'” Mauk says. “We just did it.” Giving time and resources selflessly, and hosting bonfires that brought locals from miles around to share their grief, and creating a new town sign from found debris, the group became a central force in the town's renewal.

The group kept working in California for the next year – but in 2007, when Pisco, Peru was decimated by a major quake, they headed south. The goal: to stay for five years – five times as long as most relief groups would stay – and help the town of Pisco recover and move forward.

Five years on, and Pisco Sin Fronteras is a thriving, Peruvian-run organization that has hosted hundreds of volunteers to help with rebuilding, and that now turns its focus to education. Burners Without Borders is moving on to work with Jakmel Expresyon in Haiti, among other projects. 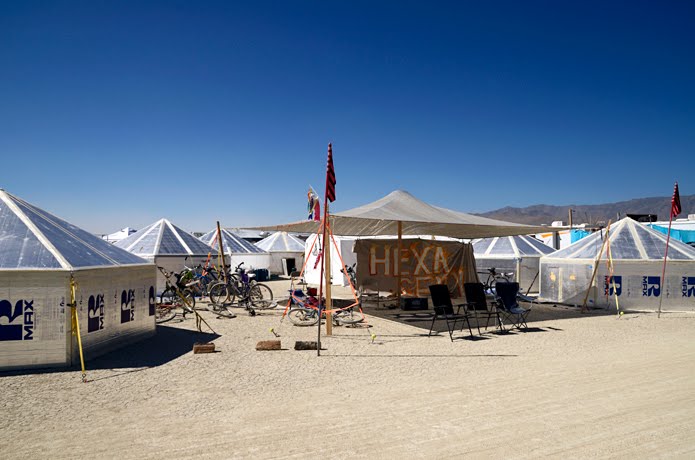 In 2002, Vinay Gupta – a leading thinker on infrastructure, disaster and design – invented a simple structure he called the Hexayurt. Designed to be constructed out of factory standard 4'x8' sheets of plywood, and costing less than $100 to build, the Hexayurt was quickly recognized as the world's cheapest and most durable emergency shelter – in some cases, cheaper than a tent. But the Hexayurt wasn't tested in an emergency; its maiden voyage was at Burning Man in 2003, sponsored by groups like 3M and SketchUp.

By 2007, the Hexayurt was being tested out by major disaster relief groups like Red Cross and FEMA. In 2010 when the quake struck Haiti, Hexayurt prototypes were used in the disaster response. And in 2011, there were over 500 Hexayurts in use at the Burning Man festival. With 13 Hexayurt models in existence, all of which are open-source with freely available plans, this invention is quickly becoming the norm for temporary shelter.

Joining the Hexayurt are a bevy of DIY-oriented, open-source and eco-minded ideas, designed not just for Burners but for anyone seeking to improve their setting with little funding. Playatech offers ingenious DIY designs for furniture that packs flat and looks good; the Alternative Energy Zone has an instruction manual for creating a basic solar generator; plans even exist for a gray water swamp cooler (an idea that Google has put into practice at its Georgia data center). And the Flexayurt takes the Hexayurt a step further, adding amenities and solar power for long-term remote, off-grid living. 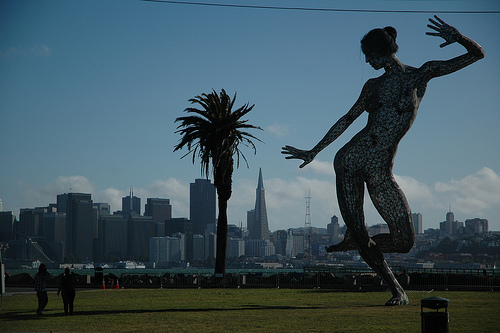 Burning Man got its first big population boost during the dot-com bubble, and in part to Bruce Sterling's 1996 Wired cover story, "Greetings from Burning Man!" Some early adherents wanted to make donations toward the project, but Burning Man wasn't a nonprofit, and didn't have a legal way to pass on money to artists.

The Black Rock Arts Foundation was created by Burning Man to help sponsor art – “our initial idea was to help save production costs by funding art at the festival,” says Goodell. But nonprofit laws wouldn't allow it, and so the mission changed, focusing on funding art and increasing civic participation throughout the world.

That mission, and Black Rock Arts Foundation's work, has proved to be one of the greatest communicators of Burning Man's cultural values in the “default world.” Over 100 projects have been funded worldwide, many of them taking art created for Burning Man and placing it in civic contexts. The focus is always on participation: making art accessible to large groups of people. This has resulted in projects like “Before I Die…”, an oversized chalkboard placed on a wall in New Orleans that let anybody fill in the blanks of what they want to do…before they die.

Black Rock Arts Foundation is tied closely to Burning Man, and like the other groups listed here, may never thrive as a completely independent entity. But many of the artists and groups it supports will thrive, continuing to make art a part of daily life wherever possible. 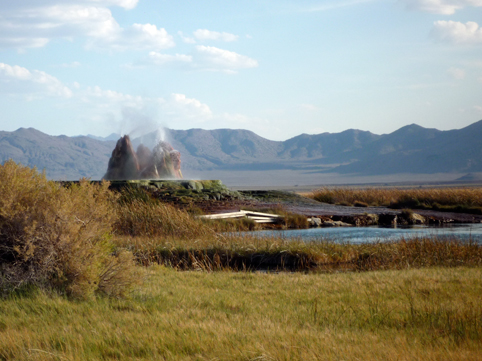 Not to be confused with the Burning Man event, the Burning Man Project is a new nonprofit will work to preserve the Ten Principles while creating new opportunities to spread the culture. “It was time,” says Goodell. “No existing entity was looking at the big picture in the longer term, that would address the future of the culture philosophically … how to examine it and create a dialogue with the world about why those values are so transformative.”

Indeed, the values Burning Man espouses have spread far and wide, popping up in nonprofits and even business discussions. A year ago when the Occupy movement began, organizers in New York and the Bay Area contacted Burning Man to talk about applying the Ten Principles. “We were pretty flattered by that,” Goodell says. She stresses that Burning Man culture can and will grow on its own, but that the philosophical intention needs to be protected from the danger of becoming commercialized.

The Burning Man Project will strike out in new directions as well. It is in talks to open an retreat center at Fly Ranch in the Black Rock region. It also plans to foster urban and rural centers, including new education centers in San Francisco. Its goal is simply to reach more people, to continue opening a wider dialogue about culture and, of course, to support anybody doing the same.

The Ten Principles, which were originally developed to give Burning Man-related events a framework for what they were doing, have become the definition of a growing cultural movement with the festival as its foundation. “We've found over time that [the principles are] a pretty good litmus test to help frame what might be a Burning Man experience,” Goodell explains. And each of the projects listed here has supported those principles in its own way.

Burning Man – and its new, nonprofit entity, the Burning Man Project – will continue to support new ideas that build on those principles – but you don't need Burning Man's permission to start your own thing. All you need is the knowledge that there's good work to be done out there, and that you can be the one to do it – which ultimately may have less to do with an art festival, and more to do with the bravery to make change.

Do you know of any other Burning Man spin-offs doing great work? Got an idea of your own? Share below.

Jessica Reeder is a member of Burning Man's Department of Public Works, writes for the Burning Blog, and works with Black Rock Solar in its Reno office.