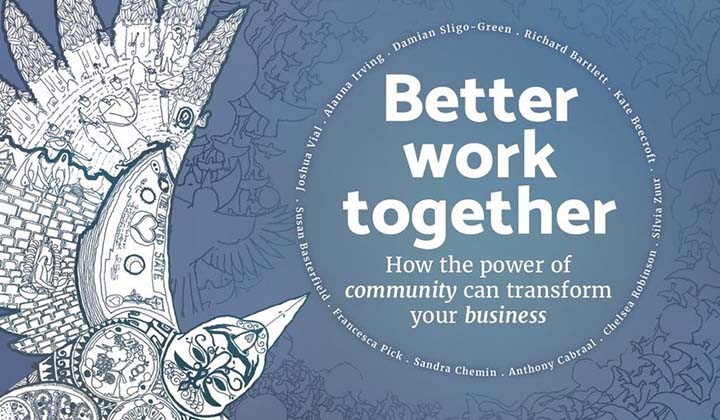 How do you create a viable business or organization without a hierarchy?

Enspiral, an entrepreneurial collective based in Wellington, New Zealand, has been working to answer this question since 2010. Started as a group of individuals doing contract work together, the community quickly shifted to launching companies focused on making its ongoing experiments in self-organization accessible to a wider audience. Successful projects include Loomio, a worker-owned co-operative that developed an open source app for consensus decision-making.

Distributed leadership has been key to the success of Enspiral and thousands of other sharing, open source and peer-to -peer communities around the world that rely on participation and networked governance to achieve outcomes for the common good.

Alanna Irving, who contributed to Enspiral’s new book Better Work Together: How the Power of Community Can Transform Your Business, has co-founded multiple startups, including Loomio, Cobudget, Enspiral, and Dark Crystal. She currently works as executive director of the Open Source Collective. We caught up with Irving to learn more about bossless leadership and her practical advice for how groups can both share power and tap members’ strengths to drive personal and social transformation.

Alanna Irving: Better Work Together doesn’t give you a formula to instantly make your organisation collaborative, flat, or purposeful — because there isn’t one. In this book, we share what we’ve learned by pushing the boundaries of the future of work in a network of social entrepreneurs called Enspiral.

It’s not a book of theory, but a field guide by and for practitioners. As is fitting for a book about non-hierarchical, peer-to-peer, distributed practices, these stories are told through many voices, in many forms, like essays, toolkits, illustrations, exercises, and even a bread recipe. Sharing the failures is as valuable as sharing the successes. The truth is organic, emergent, and human. You can’t tie it all up neatly with a bow on top, or claim that everything fits into a clever 4-quadrant diagram.

We want to offer what we have learned to others, so they can make it their own and take it even further. We’ve gathered up the best insights and transformational experiences we’ve had while growing companies, networks, and ourselves in pursuit of truly meaningful work. The core message is: Join us on the journey.

Why was Better Work Together developed, how are people using it, and what’s its impact so far?

We’re doers, often too busy doing to reflect and communicate. Enspiral has never been great at marketing itself. We’ve never been good at productising or selling what we do, because that’s never what it was about. But whenever bits of our story got out, in talks or blog posts or podcasts, people clambered for more.

I think there’s a lot of abstract theory out there about new paradigms for human group dynamics, but a lack of real, unvarnished, on the ground lived experience. People are hungry for it. The book is a way for us to bring some structure to analyzing and communicating the ideas, tools, and practices we’ve developed, and offering them to the world in an accessible format. It’s our way of recognizing that we’re part of a much bigger worldwide movement, away from top-down, command and control structures, toward bottom-up, consent-based, shared power. The book is our contribution to the larger collective discourse.

It’s been truly amazing to see people respond to the book all over the world, excitedly realising that they are far from alone in this work, and how much further we can go by sharing our stories. A lot of people are telling us they want to go deeper, so now we’re developing workshops and courses based on the book.

Your contribution to the book is largely about distributed leadership in groups. Can you share what that looks like using examples from your personal experience?

Some people think that getting rid of bosses means there’s no need for leadership. I think just the opposite: It means you need to grow the leadership capacity of everyone. Personally, it took me a long time to reclaim the notion of leadership, because I felt uncomfortable with all the baggage it carried from coercive power hierarchies.

There is a name for this thing I do, and it’s called leadership, but it’s not about bossing people around. Once I was able to uncouple leadership from positional authority, I began to see it purely as a force that moves human groups toward coordination and velocity and away from entropy. It became clear that leadership is not contained in a specific role, but can and should be distributed among many people and processes.

This led me to questions like “How do I develop as a leader when there’s no ladder to climb?” and “How can I increase overall leadership capacity in my network?” I developed a framework for understanding these ideas, which is in a section of the book called “How to Grow Distributed Leadership”, which builds up from the base of shared power and self-leadership through leading others, leading leaders, and ecosystem leadership. 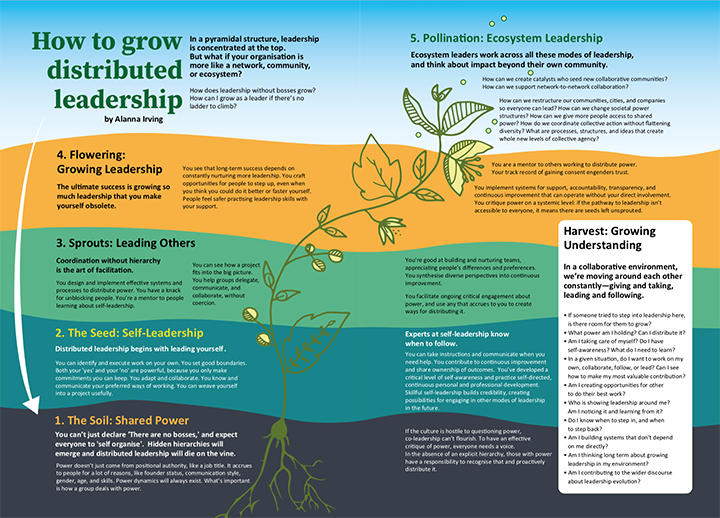 The framework has definitely helped me think more consciously about my own development, and how to mentor others who are intentionally developing leadership capacity in their own networks.

You use archetypes or personas to describe different types of leadership which have their corresponding shadow aspects. How can people become aware of their shadow aspects and make the most of them in group situations?

One of the chapters I wrote in the book describes a leadership development framework I created called Full Circle Leadership. In my work at Enspiral, I noticed an eight-step life cycle projects went through, and saw how projects fell over or fizzled if they missed some steps. 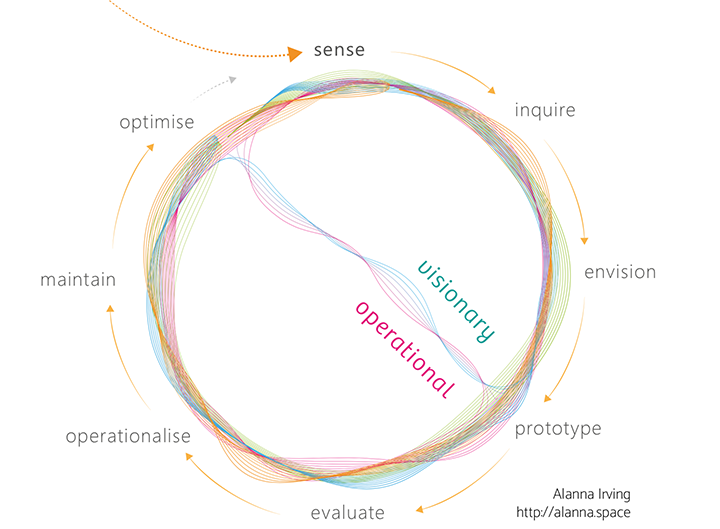 It partly came out of my annoyance that, as a network, we were great at coming up with new ideas but not as good at taking them all the way to completion. I needed to get the word “operationalisation” into our collective vocabulary. I also saw other organisations with the opposite dynamic: great at maintaining but struggling to innovate.

In parallel, as an operational leader, I went through a process of developing empathy for visionary leaders, and came to understand that we weren’t at two opposite ends of a spectrum, but part of a circle. Each of the eight steps represents its own unique kind of leadership, all of which are valuable and important.

This became a lens to better appreciate and nurture diverse leadership strengths. Equally, it’s a lens for awareness of the shadow sides. I got better at seeing my own shadows as a leader, and seeing both the light and dark sides of my collaborators. This is why working alongside diverse, respected peer leaders, who are different to you, is so important.

How can groups leverage people’s strengths and also take team members out of their comfort zone to learn new skills?

This work asks a lot of us. There is no way to keep engaging deeply, purposefully, and vulnerably in community without a lot of self-development. Sometimes we call that The Work. It never ends because humans are dynamic, complex, living beings, and groups of humans even more so.

On one level, it means always being out of your comfort zone. On another level, it means gaining a profound sense of purpose, confidence in you abilities, and unambiguous commitment to guiding values that stay steady in the face of enormous change. It’s great if you can be responsibly and safely held and guided by someone who “knows what they’re doing”, but really, no one knows what they’re doing when you’re charting new territory and constantly experimenting. It can be risky. You need a lot of self awareness and excellent boundaries.

My seven or so [years] at Enspiral felt like a never-ending stream of intensive challenges and growth opportunities. I learned so much about myself, at the same time I was learning about startups, facilitation, building technology, social impact, money, and everything else. It was incredibly rich — and, frankly, exhausting. I miscalculated and burned out multiple times.

There’s a lot in the book about self care, well-being, group processes for looking after each other, and strategies for avoiding burnout when you’ve got a fiery passion in your heart. The risk and challenge are inherent, so I’d definitely encourage people to regularly reflect and check in about how it’s really going. But to me, there is no question that it’s worth it.

Power dynamics are an inevitable characteristic of human groups. What advice do you have for groups for making them more transparent? When does it make sense to share power and what steps can groups take to get there?

The first step is to practice talking about power dynamics openly, regardless of their shape. A healthy culture means being honest about power. If you are a hierarchy, admit it. Own it! Sometimes hierarchies are the right shape for what you’re trying to do. You can have consent-based, ethical hierarchies. A lot of people actually just want to be told what their job is.

Talking about power dynamics will allow you to collectively ask important questions, like “How is our structure working for us? Could it be improved?” Sometimes groups that aspire to less hierarchy will treat power like a taboo, and try to pretend it doesn’t exist. This will not result in shared power, only in implicit, unaccountable power.

Finally, consider how our work on power in the context of human society overall [is] inextricably linked to social justice. We need to consider how power dynamics function at every level, from the macro to the micro, to truly understand them.