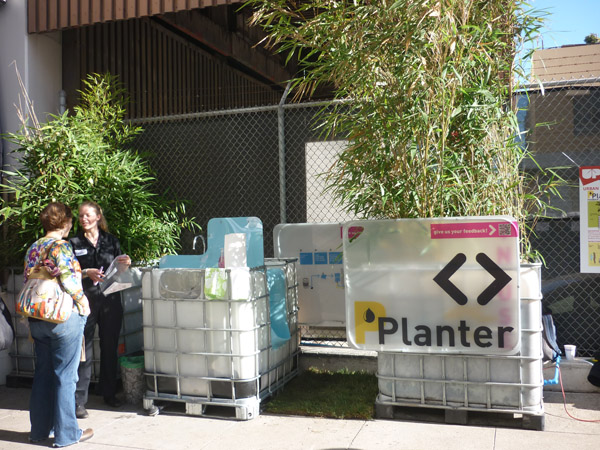 Living in San Francisco, I've come to appreciate and almost expect my fellow residents' relentless drive for innovative use of urban spaces, to redefine what it means to live and interact with each other. Caused by an acute awareness of the role our wasteful western habits and a lack of imagination have played in creating uninspiring environments, there's a be-the-change-you-wish-to-see-in the-world DNA in our blood that leads us to embrace alternative ways for sharing space.

From Burning Man to Critical Mass to Santacon, whenever there's a public display so beautifully weird and unheard of that it makes people stop in their tracks and burst into random giggles and conversations, chances are it's connected to the City by the Bay. Add in our penchant for geeky tech explorations and you could call this condition we're collectively afflicted with a severe case of "prototyping mania." It didn't surprise me at all then when I heard that the Urban Prototyping Festival (UP Festival for short) was going to make one of its inaugural appearances this weekend in downtown San Francisco.

After a walk from the F-Market stop through maddening downtown weekend shopping traffic, my friend and I were greeted by some friendly UP volunteers at the corner of 5th and Mission Streets. I was hit by the contrast between "life as we know it" along honking and cursing 5th Street and "life as it could be if we put our hearts and minds to it" as soon we turned onto Mary Street and were greeted by the sight of people meandering through the alley, looking at installations hanging from walls and fences, chit chatting with the curators and each other. 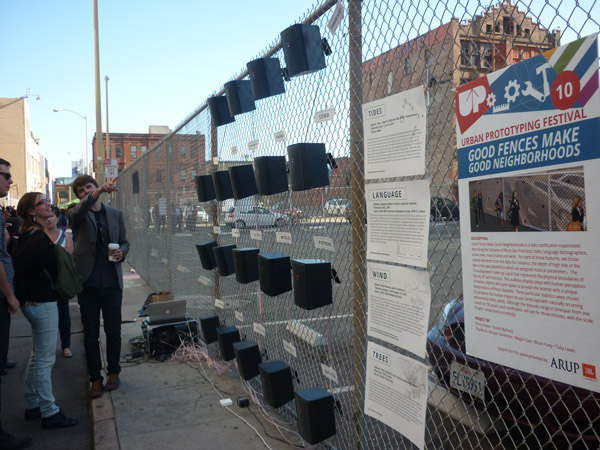 I don't know if it was the frenzy of 5th Street or just our natural instincts, but the first thing we were drawn to was a blinking red metal heart mounted on a sidewalk post. Before I could even read the "Pulse of the City" sign that explained how this installation would playfully empower me with self-awareness, it was already translating my heart rate into a musical composition that was being streamed on the internet for people to explore and analyze. The beat I got was pretty wild and odd-metered, almost Coltranesque, and somebody asked if I'd been under a lot of stress. Well, not anymore. Imagine if we had a heart on every street corner to tune into the pulse of the city! 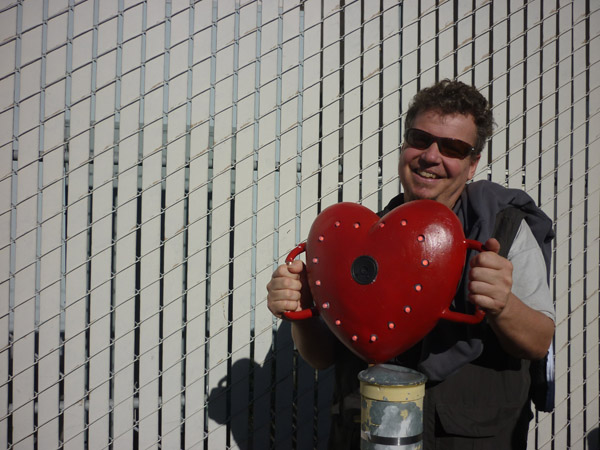 One of the things about making cities more livable and shareable is that you don't have to rebuild everything from scratch. With just a little bit of creativity you can give existing elements a completely new character. Take fences, for example. Symbolizing separation and restriction, the only thing they usually inspire is a bounce in our step to get away from them more quickly.

But what if we embraced fences and their innate qualities of transparency and graspability? What if we used them to bring people together rather than to turn them away? This seemed to be a common theme along the Mary Street chain-link fence: the Good Fences Make Good Neighborhoods prototype of 19 fence-mounted speakers broadcast unique sounds from each of San Francisco's 19 neighborhoods to create a "data sonification field" in which the entire city could be experienced aurally. The Fruit Fence showcased AgBag-style planting structures that enable community members to become collective tree stewards by keeping track of watering and fertilizing schedules through a mobile-powered dashboard that is linked to web-based sensor devices. 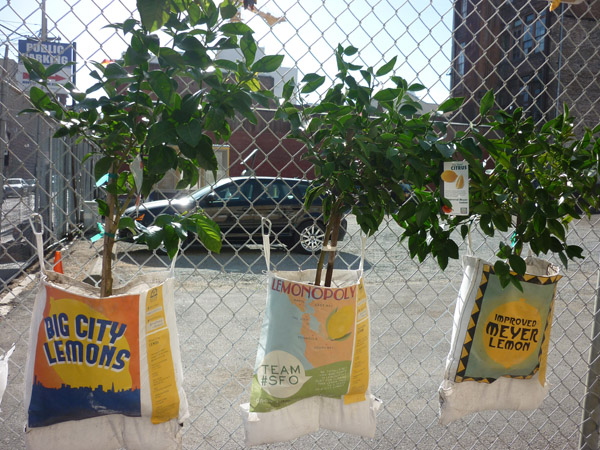 At the next intersection we noticed sounds and flashes of light emanating from Minna Street tunnel, a welcome break from squinting into the sun. We entered into the vault and were greeted by ambient sounds interacting with a flurry of atmospheric lightscapes, projected onto walls and screens. While people were chilling out on the natural grass turf, taking in the "tunnelvision" and DJs brewing up their sound elixir on the Gray Area Foundation For The Arts (GAFFTA) Stage, some serious prototyping was happening along the walls.

Two big metal hands mounted on the wall immediately caught our attention. I Just Want To Hold Your Hand seemed to draw everyone else in as well, which just confirmed what the Pulse of the City prototype had hinted at — humans are at their most inspired and motivated whenever we connect with our heart. While the official purpose of this installation was meant to measure the flow of electricity and thus the level of interactivity when two or more people complete the circuit, the lessons of this exercise seemed to be deeper. While the audio-visual responses from the projector and speakers were pretty cool, it really was the expression on people's faces as they were holding hands that told the story. 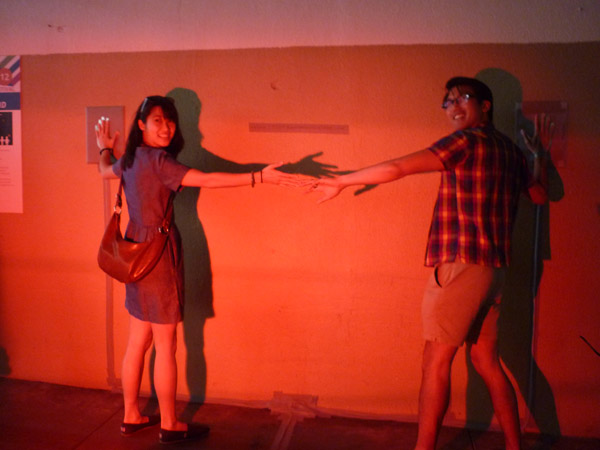 Just at that moment a friendly voice on the intercom encouraged us to find a volunteer and give him or her a hug, so we left the Minna Street Tunnel to find us one of the friendly red shirted denizens. As they all seemed to be taken already, we walked through a sea of hugs and past artists engaged in a Live Graffiti Battle on Natoma Street. 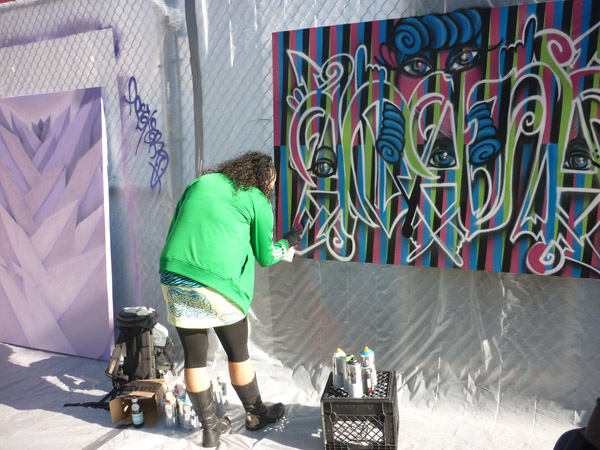 We walked into the 5M Placeworks area where things suddenly got a lot less serious. For one, there was a beer garden, packed with people reveling in some of the more primal and long-discovered joys of our shared experience on this planet. But it was the left corridor that was dedicated to the one thing that truly transcends all our differences and makes us forget all our petty adult quibbles: PLAY!

The CitiPlay experiment offered an interactive, digital mix of the iconic street game hopscotch and the repeat and remember game "Simon" that is guaranteed to make urban dwellers old and young "stop and hop on the spot." Clip + Slide transforms drab urban staircases into pure ecstasy. Using brightly colored plexi-glass laminated wood strips that clip together to existing staircases, each strip is outfitted with a sensor that produces a musical sound when you touch it while sliding by. As we watched kids old and young frolic on this magical chute, I was reminded of visionary Danish architect Jan Gehl's words: "A good city is like a good party – people stay much longer than really necessary because they are enjoying themselves." 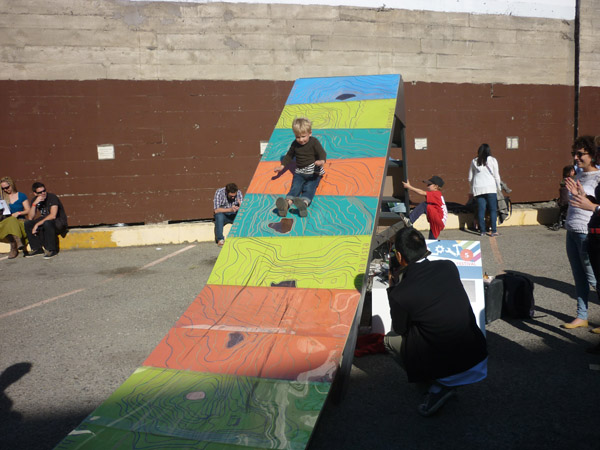 Probably my personal favorite interactive piece on the plaza though wasn't even an official prototype, but a dry-erase board put up by Neighborland inviting us all to dream about "I want . . . in San Francisco." Seeing how much water we're surrounded by and inspired by the frosty cold beverages that were being poured nearby, I happily placed the "me too" sticker handed out by volunteers next to where it said "FLOATING BEER GARDEN." 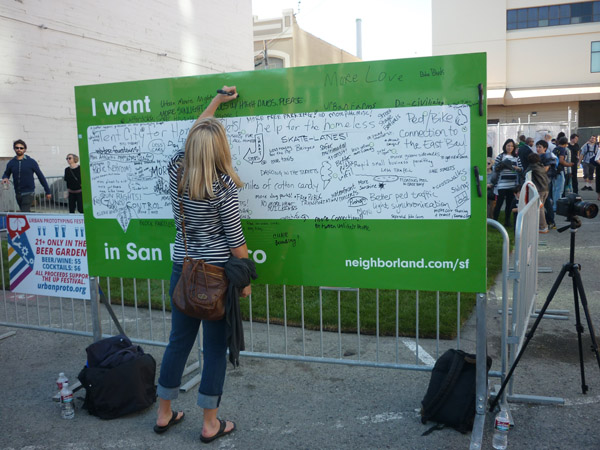 The prototype I was most bummed about missing because it wasn't dark yet was the Shared Cinema installation on the corner of Mary and Natoma Streets. This one invited people to share their favorite youtube and vimeo videos to be voted on by bystanders right there on the street. While I like the idea of using technology to connect street life with the cyber world, I actually think the reverse mechanism of bringing the web-based social life back into the physical community is a lot more useful and powerful. In the age of sitting-alone-in-front-of-a-computer-watching-movies, I've found that people are so much happier and relaxed whenever they get to share the experience in a public space. So this idea really takes the best of both worlds — the variety and flexibility of the internet combined with the power of real life interaction and a big shared screen — and reconnects our virtual existence back to our existence as sensual beings in a 3D natural world. 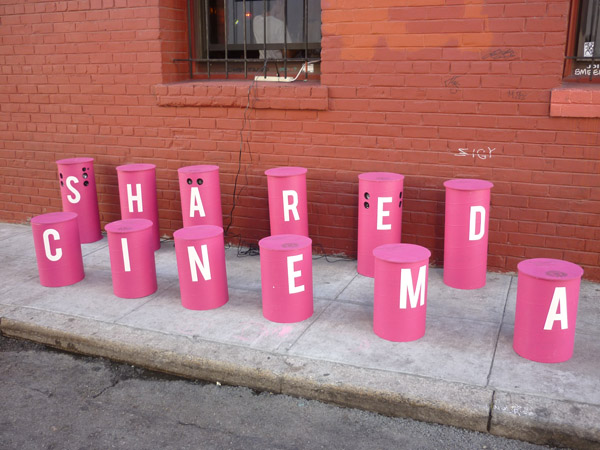 The ideas with perhaps the biggest chance of adoption and widespread use may ultimately turn out to be the more practical ones that were on display. The DIY Traffic Counter, Glowing Crosswalk, PPlanter, and Smart Bus Stops Done Dirt Cheap all seemed like great concepts to make our day-to-day shared lives just a little bit easier, intuitive and sustainable. The Darkness Map in particular, a crowd-sourced data visualization that portrays the amount of light and darkness in the nighttime urban environment on a human scale, felt very apropos to me, as the community in my Mission neighborhood has been trying to figure out how to keep certain streets better lit because of safety concerns. 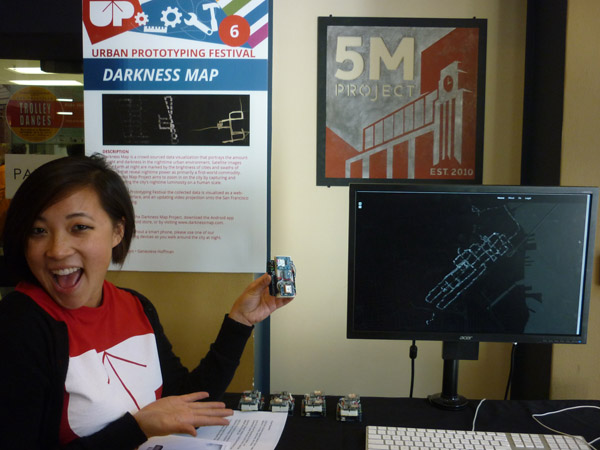 All in all, the Urban Prototyping Festival was a real winner. I hope the idea catches on in many more cities across the world. The more we can experiment with and learn from applying all the technological tools we've created to making our shared existence more sustainable, meaningful, and fun, the better.

One of the organizers summed up it up quite nicely: "Sometimes it's hard to recognize the magical pieces of the future, but we think it's always worth the try."