With Rural Hub and other partners, Ubiquitous Commons held a series of workshops on the application of P2P networking technology to the rural commons. (Rural Hub / Facebook)

The commons are in the midst of a “double transition,” write Salvatore Iaconesi and Oriana Persico, the team behind projects including Art is Open Source, Human Ecosystems, and, most recently, Ubiquitous Commons. On the one hand, the resources at stake are often abundant and immaterial—think personal data generated by social media networks or activity sensors—as opposed to scarce and material—like water and grazing land. In addition, the modern world has largely shifted from a physical relational environment to a virtual one: we increasingly live online, and we connect across screens rather than through face-to-face contact.

For those of us interested in protecting and expanding the commons, this double transition (increasing material scarcity combined with increasing immaterial abundance) presents a couple of challenges, which Iaconesi and Persico initiated Ubiquitous Commons in order to address. First, said Persico, “We’re constantly producing data—a very peculiar kind of data, such as that coming from our bodies. The idea of the “Ubiquitous” [in Ubiquitous Commons] is that it is something that will affect our daily life.”

Second, there is the question of why people share data. Human Ecosystems collates and visualizes data concerning communities’ “relational ecosystems,” but such visualizations—like existing social media platforms—do not permit users to express how they would like the information they share to be used. Iaconesi uses the example of a Tweet alerting municipal leadership to poor road conditions. “Even if I explicitly wrote something for the mayor, still the mayor has to pay money to get this information,” he explained. 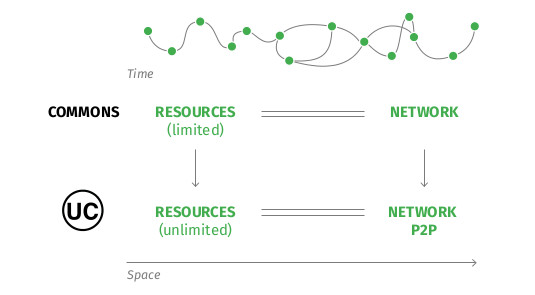 The commons' "double transition" involves both the nature of the resources at stake and the human environment in which they are shared. (Courtesy Ubiquitous Commons)

Ubiquitous Commons is hard to categorize. Part research institute, part relational laboratory, part activist artwork, its objectives range from building a legal, technical, and philosophical framework toolkit to allow people to dictate the future use of the data they share, to promoting policy interventions friendly to their model. Its first project is Iperconnessioni Rurali [PDF], an investigation of the application of P2P networking technology to the challenges facing rural Italian communities.

Though these communities may once have represented the ideal of the commons in terms of their basis in “spontaneous mutual care and solidarity,” today “rurality has many phases,” noted Iaconesi. A typical rural village might include lifelong residents, commuters, and immigrants—all of whom have unique skills and needs, but lack direct connection to their neighbors. Take commuters: “They find themselves in these places in which there’s land, space, and the possibility for tight human relationships,” said Iaconesi. “But they don’t know what to do with it. So they find themselves in places with enormous opportunities that they are not in any way able to use.”

Through a series of workshops held in collaboration with partners including Rural Hub, Ubiquitous Commons developed a couple of potential scenarios in which P2P networks could be used to strengthen communities and empower residents. In the first, the Festa Automatica, members of the network share data about their excess food, including expiration dates. The Festa Automatica code uses this information to generate an ideal time for a food-sharing event, and sends an email or text blast to members suggesting they arrange a potluck dinner or food exchange accordingly. The potential benefits of Festa Automatica extend not just to food providers, who can avoid waste, but to community members who might not otherwise have access to healthy offerings. 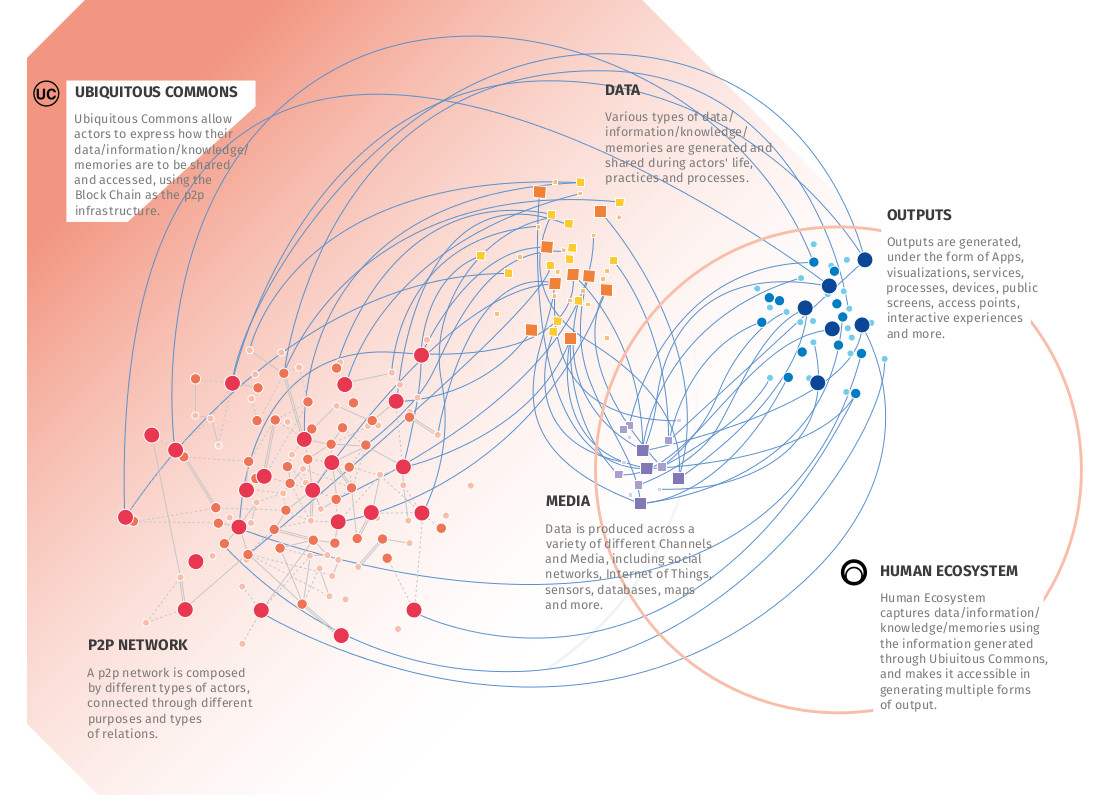 The second use scenario concerns food-product certifications. With a dizzying array of certifications available, all with their own (sometimes ambiguous) standards and accountability systems, it is hard for producers and consumers alike to know what a particular label means. Members of a rural P2P network could develop their own certification processes online, leaving the responsibility for establishing trust and distributing credentials to the network technology, and providing users with a clearer idea of what their specific program means.

Iperconnessioni Rurali currently utilizes block chain technology, but Iaconesi and Persico are exploring other systems. More important than the specific technology at play is their broader project: to develop, through real-world engagement with stakeholder communities, concrete proposals for leveraging the digital revolution for the greater good. “Basically, it’s a way for people to decide how they can do things with their relational environment,” explained Persico.