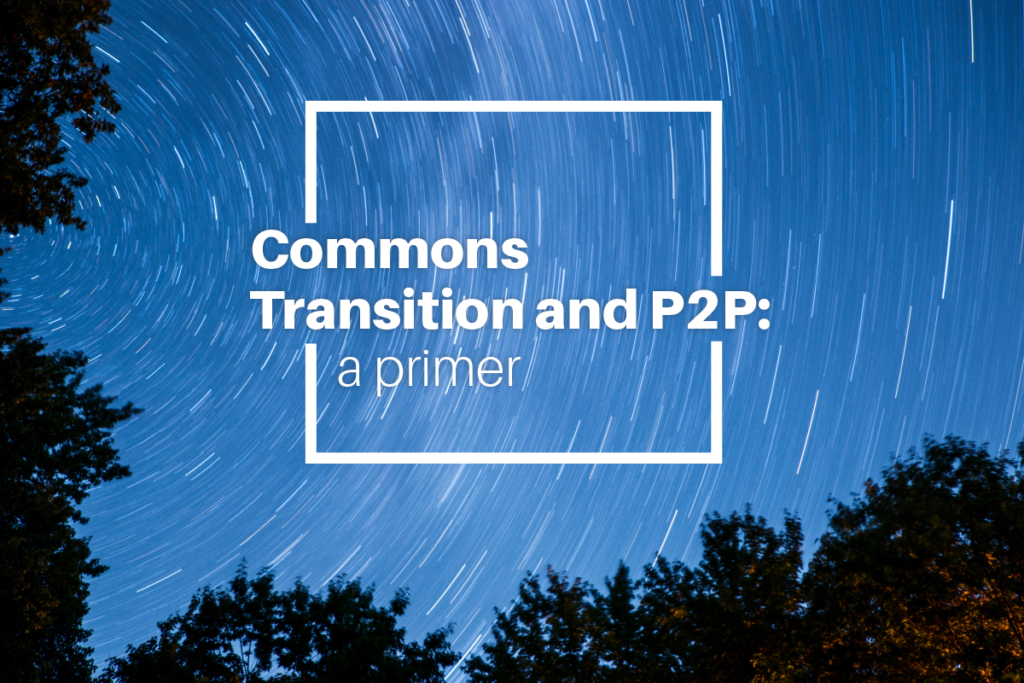 The Commons is a concept and practice that has been steadily gathering increased attention and advocacy. Deeply rooted in human history, it's difficult to settle on a single definition that covers its broad potential for social, economic, cultural, and political change. The Commons is now demonstrating its power as a "key ingredient" for change in diverse locations and contexts around the world. The P2P Foundation, with its particular focus on the relationship of the Commons and P2P practices, is supporting this Commons transition by helping share knowledge and develop tools to create common value and facilitate open, participatory input across society.

This short primer, co-published with the Transnational Institute, explains the Commons and P2P, how they interrelate, their movements and trends, and how a Commons transition is poised to reinvigorate work, politics, production, and care, both interpersonal and environmental. Drawing from our history researching and advocating for P2P/Commons alternatives for more than a decade, the primer is structured in a Q&A format, providing answers to questions such as "What are the Commons, what is P2P and how do they relate together," "what are P2P economics," "what are P2P politics," and more importantly, how these different factors can combine together at higher levels of complexity to form a viable transition strategy to solid post-capitalist system that is respectful of people and planet.

The primer features explanations for some of the key concepts we handle, as well as various case studies and infographics. It was co-written by Michel Bauwens, Vasilis Kostakis, Stacco Troncoso, and Ann Marie Utratel and designed by Elena Martínez, from the P2P Foundation. The Commons Transition Primer is a year-long multimedia project/campaign aimed at making the world of the Commons and P2P more comprehensible and attractive to commoners worldwide. This publication will be followed up by a website, video material, and events. In 2018, we will culminate the process with a full-length publication on the Commons Transition co-authored by Michel Bauwens and Vasilis Kostakis.

This primer was created by:

Michel Bauwens, co-founder and core team member of the P2P Foundation, is a Belgian Peer-to-Peer theorist. An active writer, researcher, and conference speaker on the subjects of technology, culture and business innovation, he is the vision coordinator for the P2P Foundation.

Vasilis Kostakis is the founder and coordinator of the interdisciplinary research hub P2P Lab that investigates the socio-economic and political impact of free and open-source technologies. He was the Research Coordinator and is now a core team member of the P2P Foundation.

Stacco Troncoso is a core team member and advocacy coordinator for the P2P Foundation. A co-founder of Guerrilla Translation, his work in communicating commons culture extends to public speaking and relationship building with prefigurative communities, policymakers, and potential commoners worldwide.

Ann Marie Utratel is a core team member of the P2P Foundation working in advocacy and infrastructure. She is also a co-founder of Guerrilla Translation and contributes narrative storytelling and collaborates in strategic alliance building for the larger P2P/Commons ecosystem.

The P2P Foundation (officially, The Foundation for P2P Alternatives) is a non-profit organization and global network dedicated to advocacy and research of commons oriented peer to peer (P2P) dynamics

The P2P Foundation (officially, The Foundation for P2P Alternatives) is a non-profit organization and global network dedicated to advocacy and research of commons oriented peer to peer (P2P) dynamics in society.

P2P can be characterized by the presence of open, participatory processes of production and governance for the creation of common goods, whose universal access is guaranteed by licenses such as Creative Commons or the GPL (GNU General Public License). P2P dynamics are most visible today in the many communities and movements self-organising around the co-creation of culture and knowledge. Some of the most well known examples are: Free/Open Source Software, Free Culture, Open Hardware, and Open Access in education and science.

These communities, values and practices are now also increasingly present in the world of physical production through open design, the sharing economy and co-working in hacker/makerspaces and Fab labs. These movements represent a cultural shift towards new kinds of democratic and economic participation that we believe are sowing the seeds for a more sustainable, egalitarian future.

The P2P Foundation monitors the emergence of P2P dynamics in every field of human activity. We document these projects on our open access wiki and report and critique current events on our daily blog. Our Commons Transition website combines a platform for policy proposals with a  web magazine featuring specially curated stories and interviews, with and for commoners worldwide. Our research network, led by the P2P Lab, empirically explores and expands the theoretical work produced on commons-oriented peer production, governance and property to ascertain its viability in real-world applications.

Our wider network consists of independent researchers and academics active in grassroots social movements and in public and private sector institutions, working for the transition to a P2P future.

P2P Foundation members are active all over the world, with representatives in Europe, Asia, Oceania, Africa, South America, and North America.

We are always looking to expand our coverage and welcome new members to our community.