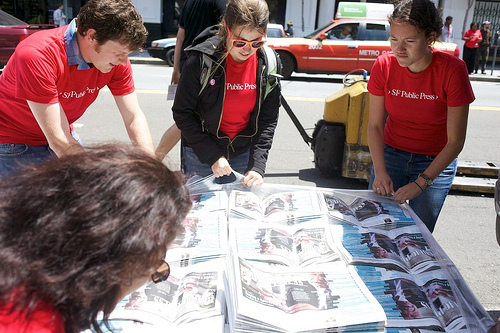 I’ve always between interested in the dialogue between our ideals and our realities, and how that dialogue shapes our cities and buildings. Last year, I started researching the Treasure Island development in San Francisco, which aims to build (over the course of the next 20 years) one of the world’s most ecological neighborhoods. I read the master plan, attended seminars with Treasure Island architect Craig Hartmann and planner Kevin Conger, and interviewed local planners and activists.

The master plan sounded terrific, but in my preliminary research I also discovered some issues that troubled me, which were largely absent from local discussion about the project. In some cases, I felt like developers and politicians were using the idealism of the master plan to paper over deep problems with the process and assumptions behind the project.

I blogged about the redevelopment for this website, but then I faced a limitation: We don’t really do investigative reporting at Shareable.net; it’s not part of our mission. However, we do share an office space with other journalists and journalistic organizations, and it seemed obvious to talk with them about expanding the investigation. In December, I sent an email to Michael Stoll and Lila Lahood of the nonprofit news site Public Press, with a cc to David Cohn of the journalistic crowdfunding project Spot.us, whose desk is right next to mine:

I just had an idea: What if Public Press, Spot.us, and Shareable.net collaborated for long-term coverage of the Treasure Island redevelopment? From the Shareable perspective, this would need to be a case study in how our values are translated into real world built environments. I could devote some cash out of the existing editorial budget to get us started, Public Press could help us locate an investigative journalist to provide on-going bloggy coverage on Shareable, and we can work together to finance coverage that might culminate in an investigative report.

We met in the office that we shared and we discussed the parameters of the project. It turned out that the literary organization McSweeney’s was interested in helping Public Press, which until that point was strictly a website, to publish a newsprint edition. We decided to build the new newspaper around a Treasure Island investigation.

But who would do the research and writing? I suggested one of our office mates (and Shareable.net contributor), the freelance journalist Bernice Yeung. She signed on with me as a writer, but we quickly realized that the project was much too big for the two of us. We worked through our network to locate three more contributors: Alison Hawkes, Christopher D. Cook, and Victoria Schlesinger. By the time the package was published, Katy Gathright, Michael Winter, Jerold Chinn, and Monica Jensen also made some important contributions.

We published the Treasure Island investigation in the first print edition of Public Press on June 22, 2010. One hundred and fourteen individuals donated $2,768 to support the story through Spot.us, matching contributions by nonprofit organizations.

The significance of increasingly common collaborations like this one goes well beyond the subject of the story. We’re telling another story, too, about the future of journalism: networked, nonprofit, crowdfunded, de-institutionalized, and collaborative.

Once upon a time, a newspaper like the San Francisco Chronicle might (or might not) have undertaken this investigation, with all the reporters working for one corporation, under one editor, their work funded by advertising. The results would be owned by the corporation, and woe to anyone who tried to use the content for other purposes. But in the Treasure Island investigation, we were operating in an entirely different model. Three distinct nonprofits ran the investigation, with each bringing a different mission and strength to the table. People supported it with individual and institutional donations. Freelance journalists did the research and writing. No one worked for anyone else; we came together as free agents because we shared a coworking space, which turned into an incubator for journalistic collaboration. The articles were published first in print, supplemented by multimedia content online, and then gradually went on to the web where they could be freely shared and linked. Today, Shareable.net published an essay, licensed under Creative Commons, which re-purposes and remixes the original pieces for our international audience.

Does the new way produce better or worse journalism than the old way? That’s not the right question. The business model that supported the old way is gone, and it’s not coming back (advertising still rules in for-profit journalism, but the terms have changed in ways that undermine serious reporting even more than before); the analog technology it used has been displaced by digital technology. As a result, newspapers like the Chronicle have largely abandoned investigative reporting. The question becomes, how can we continue to conduct thoughtful investigative journalism in the age of technological and social sharing? In a new economy and using new technologies, how can we make sure that citizens have the information they need to participate in public debate and shape the decisions that affect their lives?

"Civically minded journalists, who in the past weren't used to collaboration, are inventing new ways of telling stories about the community that are not reliant on corporate control or funding," says Michael Stoll, executive director of the Public Press. "As the commercial press cuts back, more and more of these ad-hoc arrangements are going to emerge. The challenge is to find ways—through a combination of sustainable funding sources and distributed work responsibility—to make this kind of project scalable and repeatable."

In October 2010, the Treasure Island investigation won an Excellence in Explanatory Journalism award from the Society of Professional Journalists.