Toward a More Perfect Interface - Shareable
Skip to content 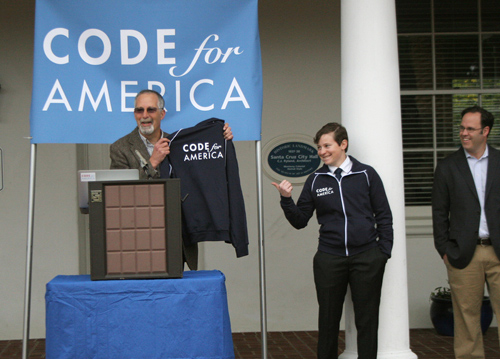 We’ve all been there. One minute you’re zipping around online, taking virtual tours, video conferencing, checking next week’s weather, and then it happens; you land on a government site and you’re thrown back to the web’s early days with layer after layer of tail-chasing information, PDF-laden data, a help page that directs to an automated phone menu and a labyrinthine set of instructions on how to proceed.

Code for America is on a mission to change this. Staunch proponent of gov 2.0, the non-profit organization strives to bring efficiency, transparency and open access to cities with a need for web-based solutions. For each city chosen, Code for America puts together a team of fellows that includes web developers, designers and entrepreneurs. The team spends 11 months designing, developing and implementing a solution to their city’s specific need.

In Santa Cruz, Calif., the Code for America team is creating an online business portal to streamline the process of starting a business. The way it stands now, prospective business owners face a maze of redundant forms, a murky view of what the process to launch a business entails, paper-based departments with limited business hours, and even some good, old-fashioned carbon-copies. The process is outdated and does nothing to help the city stimulate economic growth.

“We wanted to empower entrepreneurs, retailers and small merchants to engage with government in a frictionless manner and that wasn’t happening,” says Peter Koht, the economic development coordinator for the city of Santa Cruz. “There are different qualities of information online and no clear flowchart or transparency of how to start a business or how to make your way through it.”

One of eight cities chosen for Code for America 2012 (the others are Austin, Chicago, Detroit, Honolulu, Macon, Ga., New Orleans and Philadelphia) Santa Cruz is the smallest Code for America city to date. It’s also a city with an accessible government and an engaged and active tech community.

Koht, who spearheaded Santa Cruz’s application to be a Code for America city, saw the potential benefits that the project could bring, not only to Santa Cruz, but to the surrounding towns as well. Many of the municipalities around Santa Cruz contributed financially to the Code for America project, knowing they could utilize the end product.

Part of the Code for America mission is to make these city solutions extensible; to design them in a way that other municipalities can, with modification, use them for their own needs. In developing a clean, lightweight, open-source solution for one government, the Code for America team is actually developing a solution that any government can use.

“There is no local government that is not faced with this issue,” says Koht, “and we don’t have an economic imperative to compete. If we’re able to create a system that’s extensible and usable, not just for Santa Cruz, but for other communities, we really want to make life better for neighboring communities.” 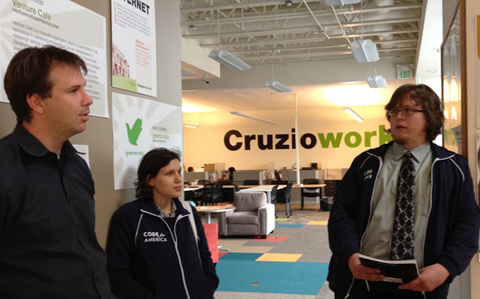 Following a month-long orientation in San Francisco, the Santa Cruz team, which is made up of web developer and designer Ruthie Bendor, graphic designer Tamara Shopsin, and website and application developer Jim Craner, is now in Santa Cruz, meeting the local tech community and government officials, shadowing city planners and getting a handle on what the project entails. They need to develop a lightweight back-end that provides easy access to the necessary information as well as a user interface (UI) that is clean, clear and visually pleasing.

Shopsin, who specializes in problem solving and conceptual illustration, is charged with the task of designing the UI. “I’m not looking to make this slick and shiny,” she says. “I want to make it intuitive. Whatever we build, I feel like I can make it open itself without too many bells and whistles.”

In addition to designing a business portal, Code for America Santa Cruz is also hosting a hackathon to work with local developers on creating apps to free up government data that is available, but hard to get to.

The goal for the Santa Cruz Code for America team is to build something that fills a specific need for the city and also demonstrate the potential of government websites. “The big picture goal is to make it easier and less intimidating for small businesses to set up a relationship with their local government.” says Shopsin. “The opportunity with emerging tech and government is to have citizens more engaged and more thoughtful.”

Koht’s hope is that the project sparks inspiration throughout the city. “Government sites are often informative but not very visually compelling,” he says. “Our hope is to be both. Then other departments can look at it and say, ‘Hey, we can do that too.’”