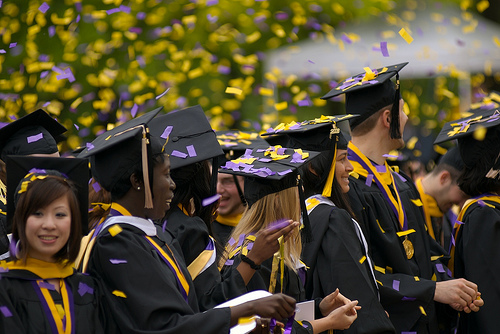 This post is intended to infill the gaps in the formal curriculum that you have just completed. Prior posts have dealt with ancillary housing options, yet more shelter strategies, dorms as models of "real world" possibilities, economic survival options, and the ultimate in "sharing" programs. I posted a short list of supplemental courses that I called "the art of crap detection" within this post.

All of the above pointed out that the most important lessons you were learning were informal; living in groups, being carless, the economies of scale, and that having access is more important than owning. If you insist on leaving the "ideal world" you just inhabited, where you literally had it all, then consider the following my commencement address.

The decision you are going to make regarding where to live is more important than your career choice. Typically, media stories will list cities that are attractive to recent grads and list the criteria supporting their choices. This story by Richard Florida goes so far as to cite that which is "important" to 20 somethings; bars, restaurants, and entertainment. (You are worth no more than your ability to consume). What everyone of the chosen cities have in common is that they are already what they are going to be. As a migrant to any one of them you are chasing a dream already realized by those who preceded you. You hope to become part of that which already exists. "I am moving to NYC cuz that's where the hipsters live". What you can't know, because your teachers like Richard Florida haven't a clue, is that you are about to participate in the "next biggest sucker syndrome". The person who is about to leave for someplace where she has a chance of actually carving out a living for herself, needs someone to whom she can sub-lease her too expensive 350 sq. ft. apartment. Don't be that person.

Its is going to take some backbone to resist the kind of marketing crap proffered by the merchants of cool, so lets use some common sense.

The places that do qualify are invariably going to be the subject of bad news. You are going to hear about the abandoned, the broke and broken places that are the casualties of the economic collapse. This is exactly where I suggest you begin your quest. Only when a place is degraded enough does it become possible to have an opportunity for real growth. Consider that Georgetown, D.C., Harlem, NYC, The Mission, S.F., SoBe, and now the Design District in Miami, are examples of what were once neglected slums. Their reconstruction afforded their pioneers the opportunity for employment, new think, and identity. Now those very people couldn't afford to live in any one of these neighborhoods should they chose to move there today.

In a world where one can literally buy anything from anywhere and have it delivered, where the newest ideas are instantly available on the web, where affinity networks thrive, the pressure to be within the hip cores is unimportant.

The myth that there are "creative communities" belies the fact that the most significant wellsprings of art are often at a remove, giving the artist the space they need to create their own identities. Think Morgan Freeman, Clarksburg Mississippi; Dennis Hopper, Wilmington North Carolina; the crowd at Black Mountain, North Carolina; or Georgia O'Keeffe in Abiquiu, New Mexico.

More important than any of the shibboleths that are so indicative of mob think, absorb the most important principle you weren't taught during your college days, buy low! This is just as true in real estate as it is an adage in the stock market.

When a place has become cheap enough that you, or more importantly a group, can pool resources and actually gain a foothold, then you have a real opportunity. Exploit the social network you have developed, form a gang, and move somewhere. The wants and needs of that place and the opportunities will sort themselves out. This is exactly what happened in Hardwick Vermont.

What a fabulous example of the success of people who went their own way. Other food oriented activities are located through Balle.

Get busy. There has rarely been more opportunity.

A version of this post was originally published at My Pink Salmon. Teaser image by m00by.