This Week in Sharing: Bikes, Bikes, and More Bikes - Shareable
Skip to content 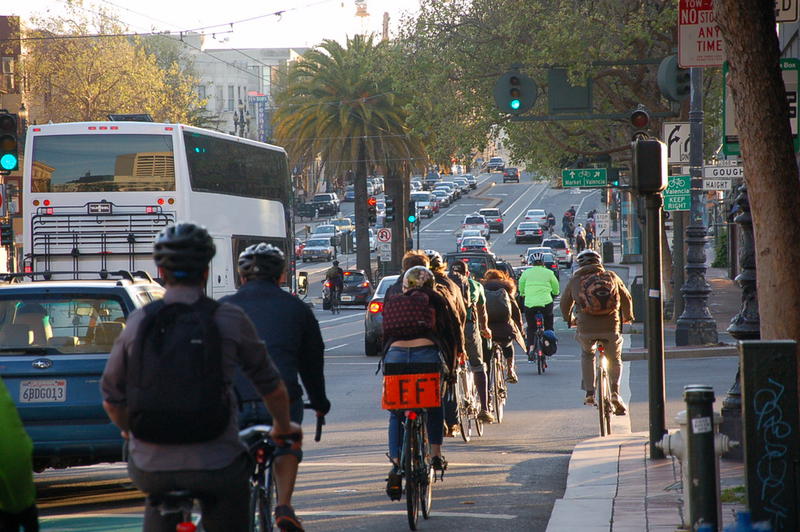 From The Atlantic Cities — bike corrals: "New York City is busy gearing up for the long-delayed launch of its bike-share program on an undisclosed date in the next few weeks, with some 5,000 people signing up for annual memberships in the first 28 hours that they were available. In the meantime, the city keeps quietly pushing ahead building new bike infrastructure for people who have bikes of their own already. The latest addition is a first for the city, and possibly even the country. In the Manhattan neighborhood of Hell’s Kitchen, bike parking corrals, rather than parked cars, are being used to protect bike lanes. Three new corrals were just installed alongside the bike lane on Ninth Avenue in response to community requests for more bike parking."

From The London Times — safer cycling in Europe: "Safer lorries could soon be arriving on Britain’s streets, saving the lives of hundreds of pedestrians and cyclists, after the European Commission proposed new designs for HGVs (heavy goods vehicles). Under the changes manufacturers would be allowed to create more rounded, aerodynamic cabs of lorries to allow for greater visibility and eliminate dangerous blind spots, a lethal problem highlighted by the Times Cities Fit for Cycling campaign."

From Gothamist — the six best bike rides in New York City: "When the city's first bike-share program prepares to kick off next month, NYC will take it to the next level as a formidably bike-friendly town, to the joy of many (and chagrin of a few). And while CitiBike aims to be a commuters' tool over a recreational one, there are plenty of long, spectacular and scenic rides in and around the city to remind you that sometimes the best part of going from point A to point B is the journey itself, especially when that journey doesn't involve spending a lot of time underground with this guy."

From LAist — the 10 best bike rides in Los Angeles: "While Los Angeles isn't exactly revered as the most bike-friendly city, it's trying. And it's gradually improving. More sharrows are marking streets, more residents are shrinking their carbon footprints and ring your bells—there's even a Bicycle Master Plan. So saddle up, Los Angelenos. We crowdsourced, huddled with the pros and did some pedaling of our own to bring you the 10 best bike rides in Los Angeles."

From The Atlantic Cities — biking around the globe: "'I know that I am taking a great risk and might never again see my native land. But then, the grim shadow of death is ever at one's elbow, and my chances of not getting through safely are not sufficiently great to deter me from making the experiment.' Those were the words of Annie "Londonderry" Kopchovsky, who in 1894 set out to circumnavigate the globe via bicycle and win a $5,000 wager that a woman couldn't perform such a feat within 15 months. Now a new short documentary film, The New Woman: Annie 'Londonderry' Kopchovsky, tells her story."

Bike counters, which have been installed on major cycling streets in cities like Copenhagen, Portland, Seattle, and Montreal, help the city get an accurate count of bike traffic and promote bicycling by showing that number on a digital display. Every time someone bikes by, the number ticks up. SF’s bike counter will show daily and annual counts of how many people have biked on eastbound Market approaching Ninth."