The Totally Shareable Art of Canning - Shareable
Skip to content 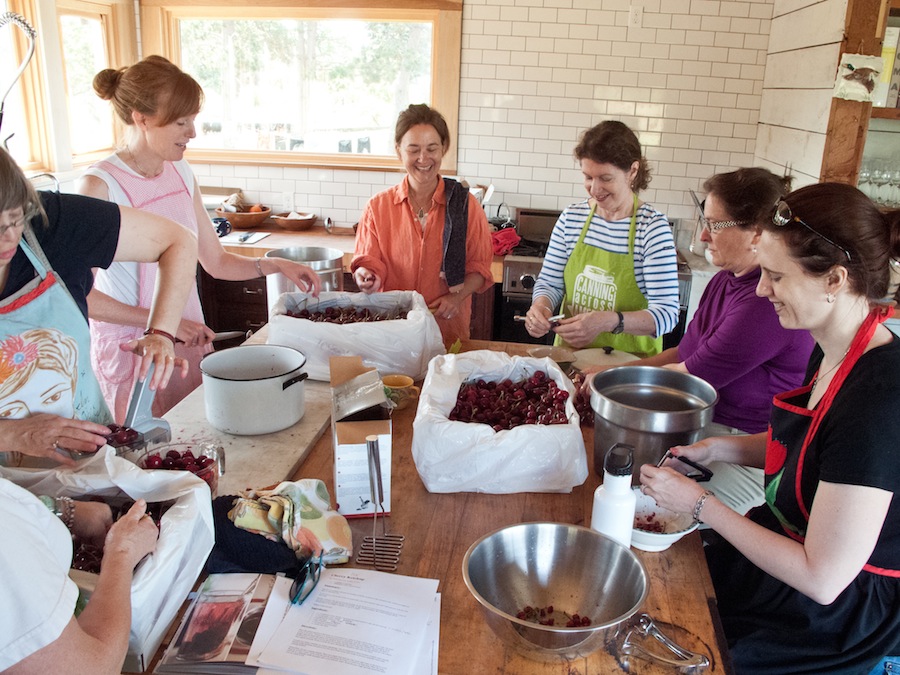 The first time Kim O’Donnel tried canning she was with two friends, both of whom were also new to canning. She describes the experience as the blind leading the blind.

“We had a great day drinking wine and listening to old Donna Summer records,” O’Donnel says with a laugh, “but we did not know what the hell we were doing. We didn’t get organized and we were running out buying jars on the same day that we were going to make peach jam.”

As O’Donnel and her friends found out, canning is one of those activities best learned from someone with experience. There are a lot of steps, recipes need to be followed to a T and it involves serious multi-tasking.

“When you’re canning in a group, there should be someone among you who actually has done it before,” says O’Donnel, who went on to found Canning Across America, a “collective of cooks, gardeners and food lovers committed to the revival of the lost art of ‘putting up’ food.”

“Things go a lot more smoothly and you’ll have a much higher rate of success if you have someone who’s more experienced showing you the ropes,” she continues. “Then you pass it on. That person’s then going to teach a couple other newbies.” 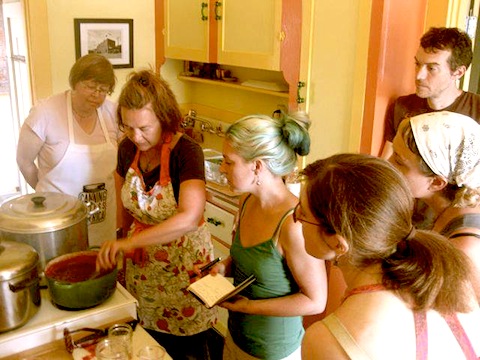 Kim O'Donnel showing how it's done. Photo by Joel Benjamin

In addition to being an each-one-teach-one affair, Canning is also a many-hands-make-light-work activity. While there are people who prefer to can alone, the nature of canning, with it’s many, precise steps and often large quantities lends itself to collaboration.

“The process itself is kind of an octopus,” says O’Donnel, who is now an experienced canner passing her knowledge on. “In the lead-up, before you’re even in the kitchen, you’re already working together,” she says listing the kettle, rack, jar lifters, jars and lids as just a few of the supplies that need to be collected.

“It’s a chance for people to pull together money, resources or connections to the actual food; whether it’s coming from someone’s garden share, or the farmer’s market, or a farm stand." She adds, “Rarely have I been in a situation where I’m canning with someone and I’m providing everything.” 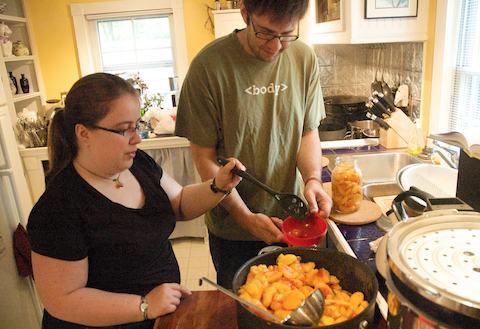 Once supplies are collected comes the actual process, which can involve washing and prepping the food, making sure everyone is on the same page regarding the recipe, passing food through a food mill, simmering food for hours, working over a boiling pot, stirring what can be huge quantities, and doing it all in a timely, organized fashion.

“You can’t just throw in 25 pounds of tomatoes and not wash them off,” O’Donnel says. “There’s a lot of care that must be taken that requires a few sets of hands.” She says if one person is tuckered out from stirring 25 pounds of tomatoes that have been passed through a fruit mill, that means the next batter is up.

O’Donnel stresses that canning is not hard and it’s not scary, but it does require your full attention. Her advice: put down the smartphone, turn off the television and focus on the task at hand.

The payoff for the focused, collaborative effort, however, can be sweet.

“Every stage of canning calls for community effort,” says O’Donnel. “[That] can be one friend or six people from the neighborhood. Then, what’s really cool, is everyone gets to benefit from the so-called fruits of your collective labor. You all get to put something up on the shelf.”

She adds that when you open one of the jars, not only to you get to enjoy the food, you also get to relive the experience of canning. “It’s a souvenir of an experience that you just had with people you love or like,” she says. “When you do open that jar later on, that’s going to come back to you.” 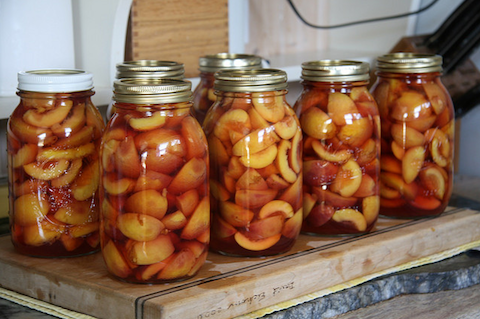 A winter's worth of nectarines. Creative Commons photo by Kendra Spencer

The community angle of canning extends beyond canning session to include recipients and growers of the food. O’Donnel, who is an accomplished food writer and author of The Meat Lover’s Meatless Cookbook, wrote an article titled “Yes, We Can: Supporting Our Farmers, Preserving the Harvest” in which she details the story of a local farmer who lost his home to a forest fire and the realization that by buying his tomatoes, 25 pounds at a time, she could help him recover. For O’Donnel it was a lesson in community, connection and gratitude.

O’Donnel also shares a story in which she spent the afternoon canning with the daughter of an old friend who she hadn’t seen in almost 30 years. She had never met the daughter and, rather than going to lunch, she brought the girl to her home to make mixed berry jam. It was, she says, “just the thing.”

“It was an icebreaker and it connected us in a way that probably would not have come about had we just gone out to lunch,” O’Donnel says. The daughter, who had canned once or twice before took home a few jars of the stash and since then, she’s sent O’Donnel a jar of something that she put up at home. 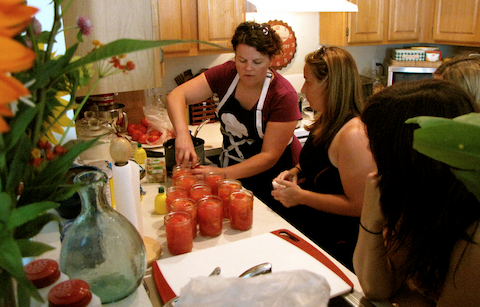 Learning how to can tomatoes. Creative Commons photo by Meaghan O'Malley

This connectedness to the farmers, the food and each other is at the heart of the canning resurgence. O’Donnel says she doesn’t know what all the influences are, but canning has experienced a renaissance that she doesn’t see going away. While she doesn’t think we’ll all end up drying our own food and making our own vinegar, she does see canning as a way to support local growers, save money, increase the quality of food, and connect with our communities.